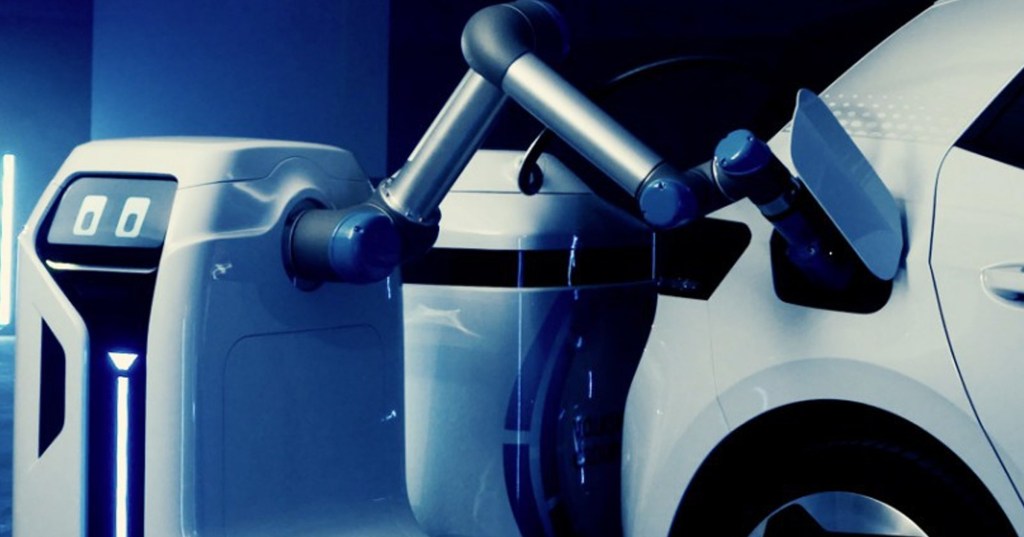 Volkswagen has unveiled a prototype of its R2-D2-esque autonomous charging robot.

The little ‘droids is designed to be used in multi-story car parks and underground garages to juice up waiting electric vehicles.

The robot pulls a battery pack over to the car, lifts the charging socket flap and connects the charger. It will also know when to uncouple the charger when the car’s battery is full.

Thomas Schmall, CEO of Volkswagen Group Components, said: ‘A ubiquitous charging infrastructure is, and remains, a key factor in the success of electric mobility.’

‘Our charging robot is just one of several approaches, but is undoubtedly one of the most visionary.’

The charging robot is activated via an app after a driver parks their vehicle in a designated area.

Then the wheeled machine attaches to a battery pack and steers towards the EV.

Each robot is packed with laser and ultrasonic scanners which would enable it to move freely around obstacles.

Setting up an efficient charging infrastructure for the future is a central task that challenges the entire sector,’ said Schmall.

‘We are developing solutions to help avoid costly stand-alone measures.’

‘The mobile charging robot and our flexible quick-charging station are just two of these solutions.’

The robot is set to be unleashed in 2021, but Volkswagen says it has successfully reached prototype status and will now be comprehensively further developed.

‘The mobile charging robot will spark a revolution when it comes to charging in different parking facilities, such as multistorey car parks, parking spaces and underground car parks because we bring the charging infrastructure to the car and not the other way around,’ said Mark Möller, head of Development at Volkswagen Group Components.

‘Even the well-known problem of a charging station being blocked by another vehicle will no longer exist with our concept,’ Möller continued. ‘You simply choose any parking space as usual. You can leave the rest to our electronic helper.’

‘Even the well-known problem of a charging station being blocked by another vehicle will no longer exist with our concept,’ Möller continued. ‘You simply choose any parking space as usual. You can leave the rest to our electronic helper.’