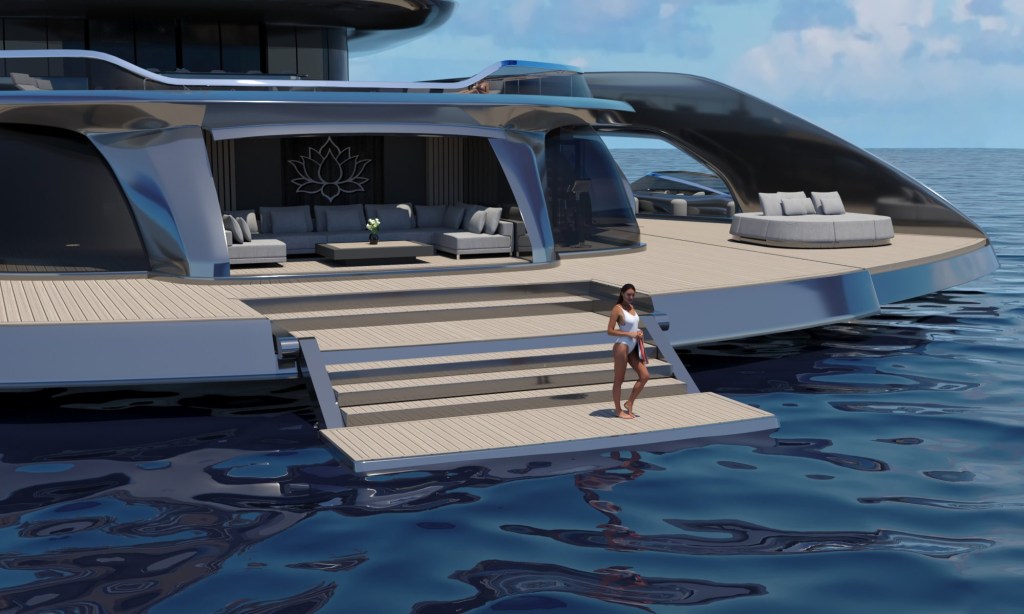 Have some spare millions lying around and can’t decide what to spend it on?

This gigantic megayacht should do the trick.

For the ultra-rich, there’s nothing that seems extreme when building a top of the range sea vessel: that means helipads, beach clubs and pools.

If you can’t work whether your new yacht would fit in your harbour space, it’s 120 metres long – that’s almost 9 double decker buses end to end.

In fact, Project Indah, is so long it’s one of the top 30 lengthiest megayachts in the world.

According to Florida-based Opalinski Design House, Project Indah ‘has been created to meet the growing demand for megayachts over 100 metres’.

And all that deck space is filled with goodies to soak up your spare millions.

A gym and sauna behind tinted glass with sea views, a helicopter landing pad for quick getaways (and an optional helicopter garage below deck) and your own private owner’s suite with balcony hot tub and sunbed.

The boat also has a patented rotating bulkhead (the sides of the boat) mechanism, that allows for expanded decking that transform into a sprawling beach club.

Opalinski says that ‘when the beach club transom is fully deployed it allows for accessing the water and unobstructed views from much larger deck space.

And it wouldn’t be a modern megayacht without some nods to our dying planet: Indah has solar-generating surfaces and wind turbines so it can produce its own green energy onboard.

A crew of 32, up to 24 guests and all that heft doesn’t appear to slow the vessel down either – Indah should be able travel at 24 knots (27mph), ferrying you between your favourite tax havens at lightning speed.

Though the boat hasn’t yet hit the manufacturing stage, you can register your interest with Opalinski Design House here (and find out the eye-watering price).