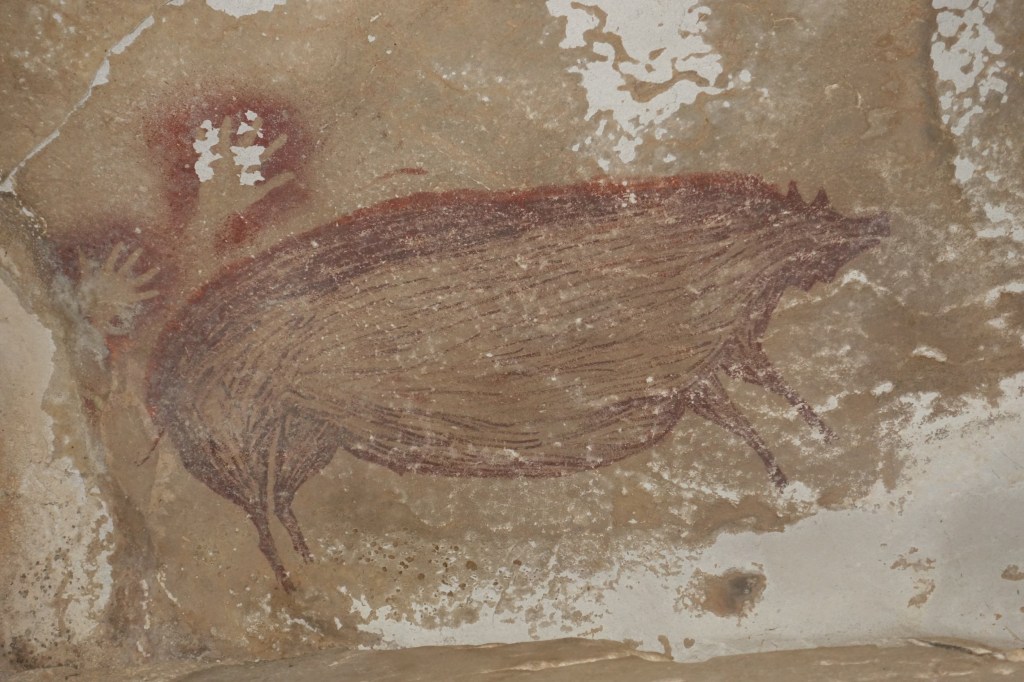 The incredible discovery provides a glimpse into the earliest known human settlement in the area, on the island of Sulawesi.

Measuring 136 by 54 centimeters, about the size of a sofa cushion, the Sulawesi warty pig was painted using a dark red ochre pigment.

There are also two hand prints next to the pig, a possible artist’s signature, as well as two more faded drawn pigs which could be part of a larger scene.

The Leang Tedognge cave where the pig resides is hard to access: in a remote valley surrounded by steep limestone cliffs, it’s an hour’s walk from the nearest road.

To make matter’s more difficult, the cave can only be accessed during part of the year because of flooding during the rainy season.

While the discovery is older than any cave painting seen before, members of the Bugis community have known about it for generations – this is just the first time Westerners have seen it.

The warty pig was described in the journal Science Advances, after a doctoral student came across it in 2017.

‘The pig appears to be observing a fight or social interaction between two other warty pigs,’ said study co-author Adam Brumm.

Warty pigs are one of humanity’s oldest known prey, having been hunted for tens of thousands of years.

They appear in many other cave paintings, particularly during the Ice Age.

The age of the painting was identified by early human migration and dating specialist Aubert, who used Uranium isotope dating to calculate the age of a calcite deposit that had formed on top of the painting.

This makes the panting at least 45,500 years old, but could be even older.

‘The people who made it were fully modern, they were just like us, they had all of the capacity and the tools to do any painting that they liked,’ said Aubert.

The next oldest cave painting in the world, which is at least 43,900 years old, was found on the same island, depicting a group of hybrid human-animal figures hunting mammals.

Much can be gleaned from cave paintings like these, especially the knowledge of human migration.

Anthropologists know that Homo sapiens reached Australia 65,000 years ago, but to get there they would have had to cross the islands of Indonesia, known as ‘Wallacea’.

While the team believe the artwork was made by Homo sapiens, they can’t rule out it was made by a now extinct related species, like the Denisovans.

Researchers are now working on extracting DNA from residual saliva they believe could be on the painting, as artists would have had to spit pigment to make the hand prints.