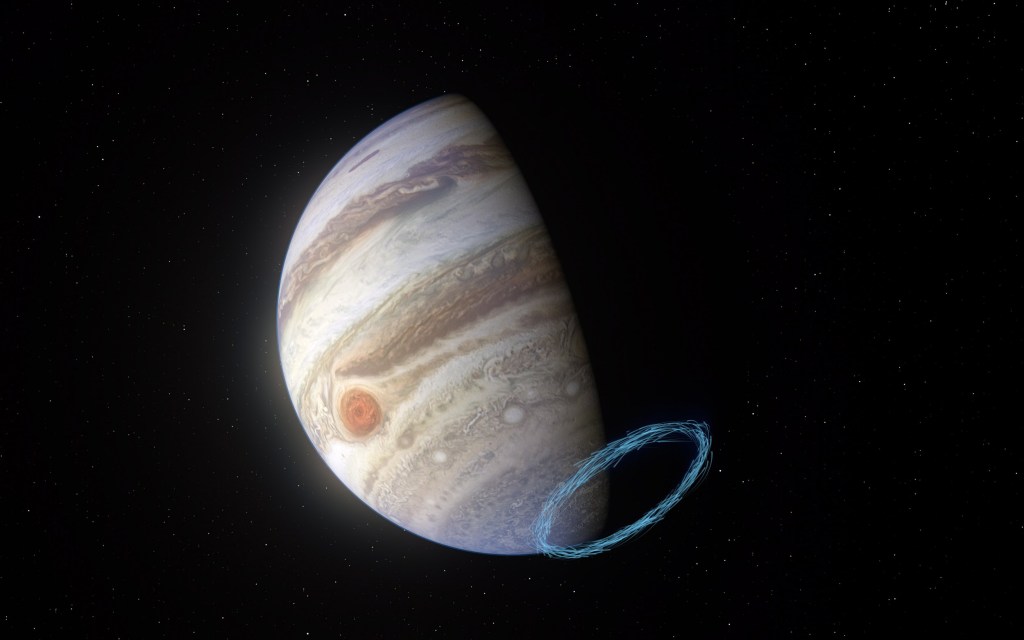 Scientists have gathered further evidence of just how blustery it is on Jupiter, recording wind speeds of almost 900mph which make the planet a ‘unique meteorological beast’ in our solar system.

The fifth planet from the Sun is renowned for having windy conditions, but less has been known about the middle part of the atmosphere, called the stratosphere.

Usually it is possible to get an idea of the speed by tracking the movement of clouds, but the problem is Jupiter’s stratosphere does not have any, despite it being loaded with them in other layers of the atmosphere.

Instead, astronomers found another way, thanks to a comet collision that happened in 1994.

The impact of this event sent new molecules – hydrogen cyanide – blowing around the gas giant, which a team of astronomers could then follow using a telescope called Atacama Large Millimeter/submillimeter Array (Alma), part of the European Southern Observatory (ESO) located in northern Chile.

They detected the presence of strong jets, with speeds of up to 400 metres per second, the equivalent of 894mph, located under Jupiter’s poles, the vivid glows known as aurorae.

These strong blasts are more than twice the maximum storm speeds reached in Jupiter’s Great Red Spot, a high-pressure region on the planet, and over three times the wind speed measured on Earth’s strongest tornadoes.

‘Our detection indicates that these jets could behave like a giant vortex with a diameter of up to four times that of Earth, and some 900 kilometres in height,’ said Bilal Benmahi, co-author of the research from the University of Bordeaux.

Thibault Cavalie, who led the study, said: ‘A vortex of this size would be a unique meteorological beast in our solar system.’

PrevPreviousMartin Lewis’ advice on Bitcoin: should you buy it?
Next‘Very unusual’ Arctic fish found to glow in the darkNext