‘Very unusual’ Arctic fish found to glow in the dark 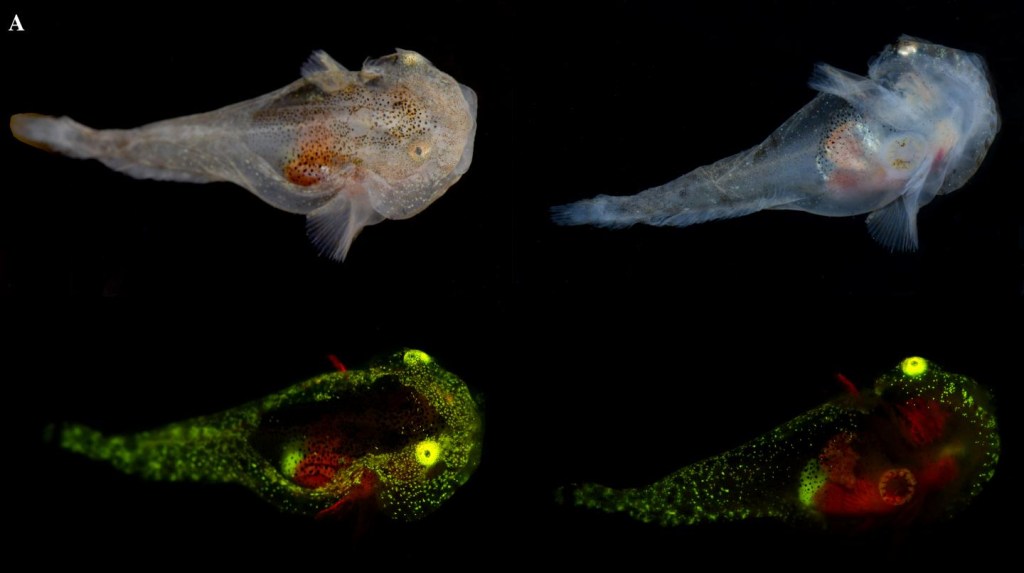 For the first time, scientists have discovered that certain fish living in the icy waters of the Arctic can glow in the dark.

It’s not yet clear why these creatures glow or ‘biofluoresce’, but it might have a role in communication and mating.

Researchers spent hours diving in the waters around Greenland in their hunt for biofluorescent creatures. Although they are relatively well documented in tropical regions, such fish had not been found in the Arctic before.

The Arctic has very long and very short days, depending on the season. Scientists thought this might affect their ability to glow.

Certain sea creatures absorb the ambient blue light of the ocean and re-emit it as a green, orange or red glow.

American Museum of Natural History researcher David Gruber said: ‘The light regime at the poles provides for winter months of near total darkness, where biofluorescence would not be functional.

‘But given the summer months with the midnight Sun, we hypothesised that it could be present.’

Gruber and his colleague John Sparks, a museum curator, discovered two young snailfish that glowed red and greenduring their expedition to Greenland. As expected, they found biofluorescence to be relatively rare in the Arctic.

The glowing snailfish, known as Liparis gibbus, normally swim between 100m and 200m below the surface. They are found in the waters of Greenland, Canada, Russia, Svalbard and southeastern Alaska.

The fish are particularly special because they glow even in cold waters. Other fish that normally glow brightly in warmer waters were found not to glow in the Arctic.

It is also very rare for fish to glow multiple colours, the researchers said in a study published in the American Museum Novitates.

Sparks said: ‘We were surprised to find these juvenile snailfish brightly fluorescing in not just one, but two different colors, which is very unusual in a single species.’

Numerous animals have been shown to glow in the dark in recent years, including sharks, squirrels and hares. But exactly why these animals emit these bright colours remains a mystery.

Sparks and Gruber hope that more research will provide some answers.

Sparks said: ‘We are now focusing our efforts on determining the function of fluorescence in various fish groups, including catsharks, where we have shown that bright green fluorescence enhances contrast in their pigmentation pattern, making it easier for individuals to see each other at depth.’

MORE : Fishing crew reel in shark so huge they could barely fit it on the boat

PrevPreviousStratospheric windspeed at Jupiter’s poles can reach 900mph
NextAsteroid 2001 FO32: When will it pass Earth and can I watch it?Next