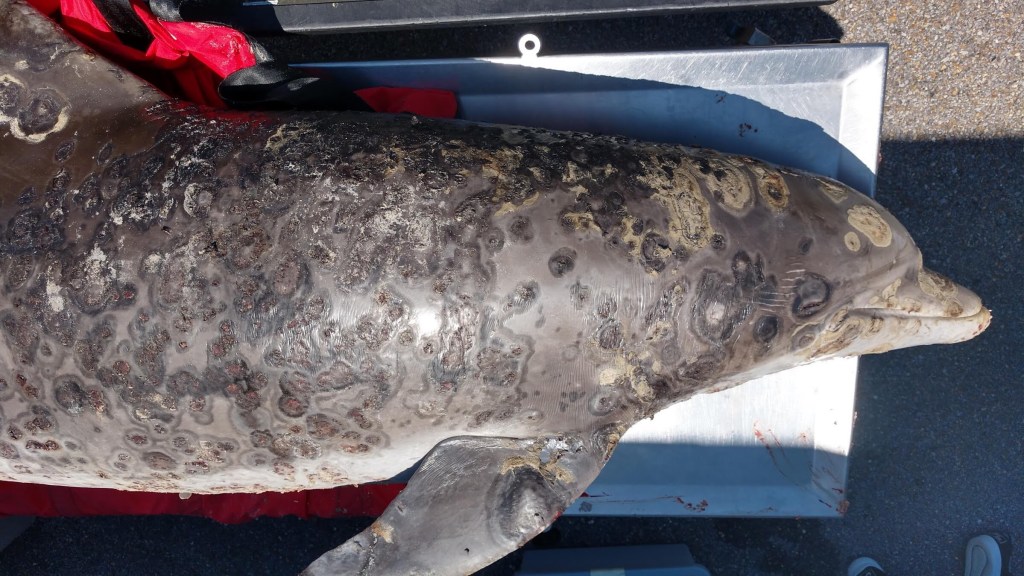 A novel skin disease affecting bottlenose dolphins has been causing scientists to scratch their heads for years.

The disease covers the creatures’ skin in lesions and, ultimately kills them.

Now, in a breakthrough discovery, researchers have found that it is linked back to climate change.

The study is the first time since the disease first appeared in 2005 that scientists have been able to link a cause to the condition that affects coastal dolphin communities worldwide.

Due to the decreased water salinity brought upon by climate change, the dolphins develop patchy and raised skin lesions across their bodies-sometimes covering upwards of 70 percent of their skin.

Scotland contains one of Britain’s only two known resident groups of bottlenose dolphins. Those in the Moray Firth, being so far north, means they tend to be larger and have thicker blubber than their southern counterparts.

They attract thousands of tourists each year to the Black Isle.

Scientists at The Marine Mammal Center in Sausalito, California -the largest marine mammal hospital in the world-and international colleagues carried out the research.

This study comes on the heels of significant outbreaks in Louisiana, Mississippi, Alabama, Florida and Texas and Australia in recent years.

In all of these locations, a sudden and drastic decrease in salinity in the waters was the common factor. Coastal dolphins are accustomed to seasonal changes in salinity levels in their marine habitat, but they do not live in freshwater.

The increasing severity and frequency of storm events like hurricanes and cyclones, particularly if they are preceded by drought conditions, are dumping unusual volumes of rain that turn coastal waters to freshwater.

Freshwater conditions can persist for months, particularly after intense storms such as hurricanes Harvey and Katrina. With the increasing climate temperatures, climate scientists have predicted extreme storms like these will occur more frequently and, consequently, will result in more frequent and severe disease outbreaks in dolphins.

‘This devastating skin disease has been killing dolphins since Hurricane Katrina, and we’re pleased to finally define the problem,’ said Pádraig Duignan, chief pathologist at The Marine Mammal Center said in a statement.

‘With a record hurricane season in the Gulf of Mexico this year and more intense storm systems worldwide due to climate change, we can absolutely expect to see more of these devastating outbreaks killing dolphins.’

The study has major implications for the current outbreak in Australia, which is impacting the rare and threatened Burrunan dolphin in southeast Australia, and could provide professionals with the information needed to diagnose and treat affected animals. Currently, the long-term outlook for dolphins affected with the skin disease is poor. This is especially true for the animals suffering from prolonged exposure to freshwater.

The deadly skin disease was first noted by researchers on approximately 40 bottlenose dolphins near New Orleans after Hurricane Katrina in 2005.

‘As warming ocean temperatures impact marine mammals globally, the findings in this paper will allow better mitigation of the factors that lead disease outbreaks for coastal dolphin communities that are already under threat from habitat loss and degradation,’ said Mr Duignan.

‘This study helps shed light on an ever-growing concern, and we hope it is the first step in mitigating the deadly disease and marshalling the ocean community to further fight climate change.’