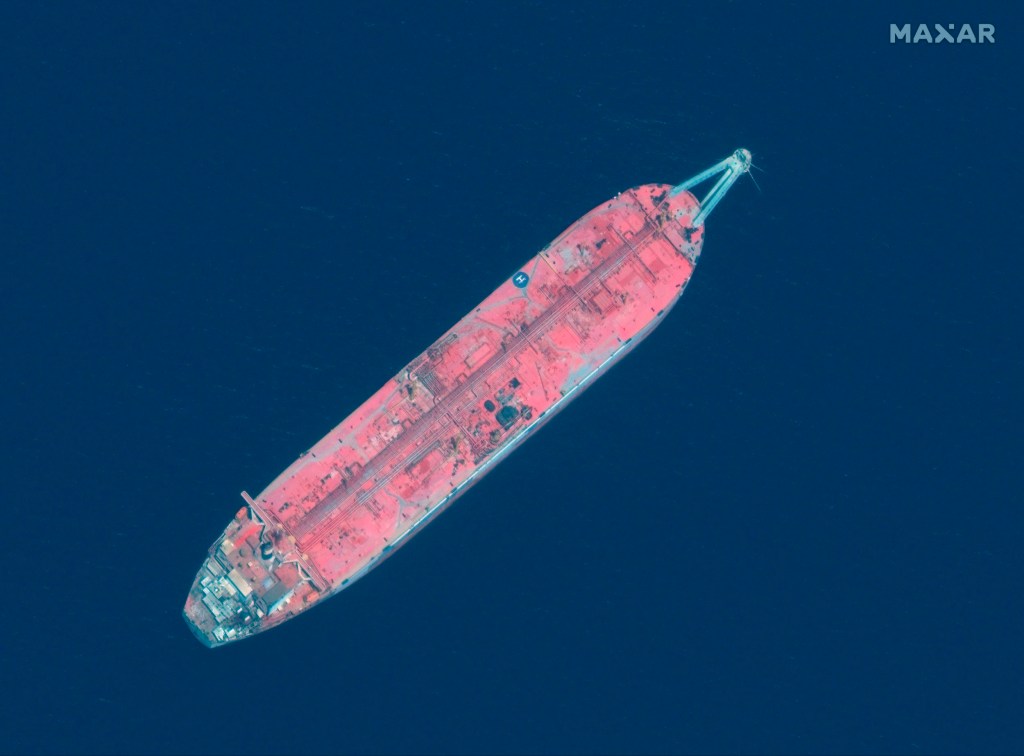 A rusting oil tanker in the Red Sea is set to trigger one of the worst environmental disasters in history, scientists have warned.

The vessel stranded off Yemen is loaded with more than a million barrels – and could break apart at any moment.

This is four times the amount spilled by Exxon Valdez in Alaska more than three decades ago – which is still polluting the US coastline today.

Ironically called the Safer, the tanker is a floating storage and offloading unit abandoned for years – and with access controlled by Yemen’s Houthi rebels.

Lead author Professor Karine Kleinhaus, a marine expert at Stony Brook University in New York, said: ‘The time is now to prevent a potential devastation to the region’s waters and the livelihoods and health of millions of people living in half a dozen countries along the Red Sea’s coast.

‘If a spill from the Safer is allowed to occur, the oil would spread via ocean currents to devastate a global ocean resource, as the corals of the northern Red Sea and Gulf of Aqaba are projected to be among the last reef ecosystems in the world to survive the coming decades.’

They survive in much warmer waters than today’s ocean temperatures – which are becoming too high for most coral to tolerate.

Over half of the Great Barrier Reef has degraded due to marine heat waves caused by climate change.

Prof Kleinhaus and colleagues are calling for action to remove the abandoned tanker before it’s too late.

Last month the Houthis agreed to let a United Nations team board the Safer to inspect and repair the vessel in the near future.

It has had virtually no maintenance since the start of Yemen’s devastating civil war five years ago.

The 45-year-old tanker is anchored about 37 miles north of the rebel-held port of Hudaydah.

Water recently entered its engine room – increasing the risk the vessel would sink or explode.

The reefs off Yemen in the southern Red Sea are highly diverse and rich. The fish are a major resource of food for the populations of the region.

Dr Kleinhaus and colleagues said oil spots have been reported next to the tanker – indicating likely seepage. It has been abandoned since 2015.

This is a long advance warning of a decaying tanker poised to degrade to the point of a mass oil leak into the Red Sea.

A computer model developed by the researchers shows for the first time how the oil will disperse if it begins this winter.

Dr Kleinhaus said it would be the worst case scenario – cause much broader and extensive damage.

It would travel much further afield because of the typical currents in the region, she explained.

Despite signs of structural deterioration, access has yet to be achieved. Real steps to repair or to prevent an oil spill have yet to been taken, say the international team.

Dr Kleinhaus said: ‘Emergent action must be taken by the UN and its International Maritime Organisation to address the threat of the Safer, despite political tensions, as a spill will have disastrous environmental and humanitarian consequences, especially if it occurs during winter.

‘With millions of barrels of oil, a day passing through the Red Sea, a regional strategy must be drafted for leak prevention and containment that is specific to the Red Sea’s unique ecosystems, unusual water currents, and political landscape.’

As well as devastating marine life, an oil spill could destroy the livelihoods of people who depend on the area for fishing.

The oil on Safer is estimated to be worth £31 million. The UN wants the proceeds shared between the Houthis and the Yemeni government, backed by a Saudi-led coalition of Arab states. The Houthis want it all.

Yemen’s civil war has reportedly killed more than 100,000 people and triggered what the UN says is the world’s worst humanitarian crisis.

More than 24 million people require some form of aid and protection, while an estimated two million children are acutely malnourished.

The country is also now struggling to contain Covid-19.

The Exxon Valdez oil tanker slammed into the Bligh Reef in Alaska in 1989 – spilling more than 11 million gallons of crude oil into Prince William Sound. The coast still remains polluted by the oil.

The study is published in Frontiers in Marine Science.

PrevPreviousChristmas Star: Jupiter and Saturn align tonight for the ‘Great Conjunction’
NextMen and women of the US Space Force will officially be called ‘guardians’Next