Robots are building brick and mortar houses for us now 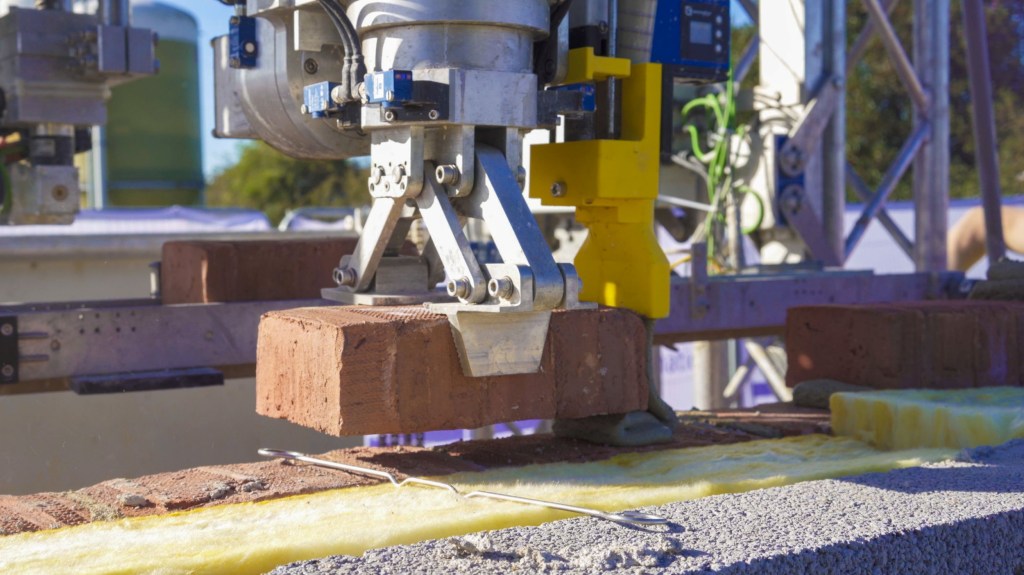 A three bedroom house in East Yorkshire is being built from the ground up by a robot.

In place of labourers, the building is being constructed by a robotic bricklayer designed by experts at a British engineering firm.

The machine is currently being put to work at a building site in the village of Everingham near Pocklington, East Yorks.

One part of the robot has a mechanism to spread mortar while another, similar to a claw, picks up the bricks and lays them. It’s controlled from a tablet and uses ‘a sophisticated software control system’ to read digitised architectural plans.

Building in this way requires just two people to work on each house – a labourer to load bricks and mortar into the robot and a skilled person to do jobs such as pointing.

The robot’s control system sends out alerts when these important jobs need doing. On board sensors measure each individual brick to line it up centrally on the wall and with the edge of the next brick – to produce a ‘perfect finish’.

The Yorkshire company behind the robot, Construction Automation, say it will increase productivity, build better quality houses and improve health and safety on sites.

Firm founder David Longbottom said the machine, which is called the Automatic Brick Laying Robot (ABLR) will lay all 10,000 bricks and spread every ounce of mortar.

It can even build around corners, he added.

Construction started on 28 September and the company expected the build to be finished in two weeks but ‘teething problems’ mean it is likely to be completed in three weeks.

Mr Longbottom said: ‘It is the first house in the UK to be built by a robot and possibly the first in the world.’

He added that extensive research confirmed there was ‘no house-building robot in use like this’ anywhere else.

The ABLR is mounted on a track and sat on a 30ft high vertical frame, removing the need for scaffolding and for people to work at height.

It begun work last month after four years of development.

Mr Longbottom said: ‘Our goal is to automate housebuilding as far as we can.

‘By doing this, we can increase productivity for the industry, improve health and safety, and guarantee quality.’

Construction Automation has already secured patent in the USA on the technology, and a European and UK patent is expected to follow shortly.

Mr Longbottom added that once the ABLR had completed this house and a number of other test properties, the company will be ready to go into full production.