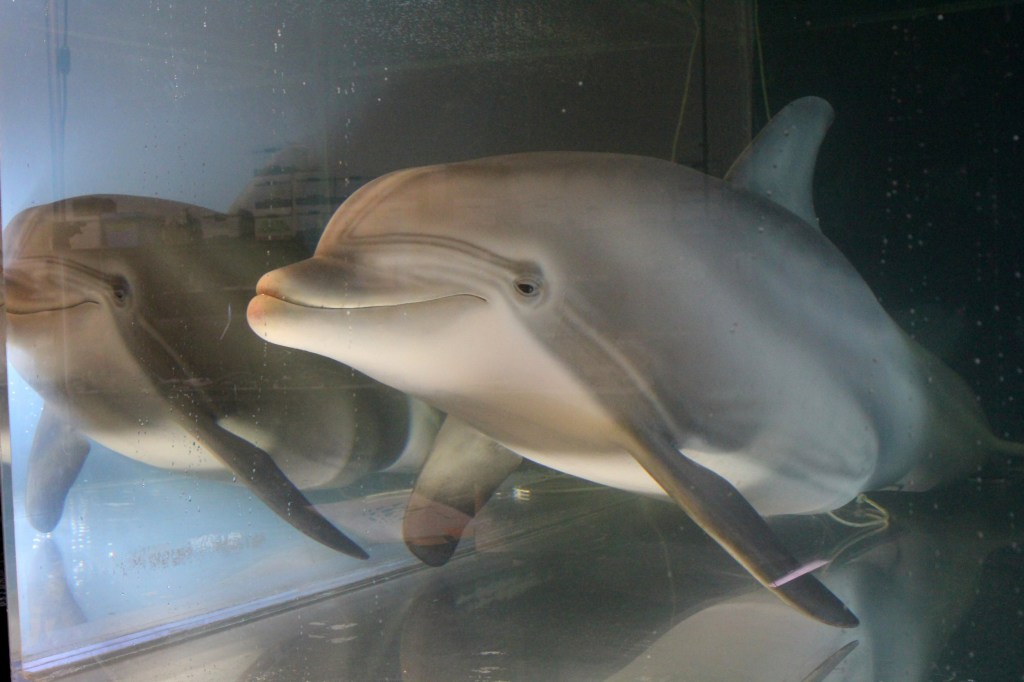 Robot dolphins could come to replace their real-life counterparts in the theme parks of the future.

Darting around the pool as a group of swimmers stands in the shallow end, the dolphin in question looks much like those that jump through hoops and perform acrobatics at attractions around the world.

But this marine creature isn’t real.

‘When I first saw the dolphin, I thought it could be real,’ said a woman who swam with the remote-controlled creature.

Edge Innovations, a U.S. engineering company with an animatronic and special effects division in California, designed the dolphin, which starts at $3 million per animal.

It hopes that life-like animatronics used in Hollywood movies could one day entertain crowds at theme parks, instead of wild animals held in captivity. Swimmers could dive with robotic great white sharks or even reptiles that filled Jurassic-era seas millions of years ago.

‘There are like 3,000 dolphins currently in captivity being used to generate several billions of dollars just for dolphin experiences. And so there’s obviously an appetite to love and learn about dolphins,’ said Edge Innovations founder and CEO Walt Conti.

‘And so we want to use that appetite and offer kind of different ways to fall in love with the dolphin.’

Some 20 European countries have already banned or limited the presence of wild animals in circuses.

At Edge’s Hayward, California headquarters, its 550-pound (250-kg), 8-and-a-half-foot (2.5-meter) animatronic dolphin with skin made from medical-grade silicone headlined a program for schools in partnership with TeachKind, part of People for the Ethical Treatment of Animals (PETA).

Edge is currently pitching the robo-dolphin to various Chinese theme parks and and reckons it could sell up to 150 of them over the next three years. When you factor in that each one costs a few million dollars, that’s a significant amount of cash.

But the company thinks that, when compared with upkeep and medical costs for live animals, the animatronic ones could pay for themselves in just a few years.

‘In terms of a 10-year business operating period and a two million annual visitor capacity, the overall investment and maintenance costs for a decent animatronics entertainment portfolio only accounts for about one quarter or no more than one-third of what a traditional aquarium spends,’ Edge Innovation’s Li Wang told the South China Morning Post.

Alongside the accurate skeleton is a realistic skin coating so anyone swimming alongside and touching the robot wouldn’t be able to tell it wasn’t real.

And just for that added bit of realism, the robot’s teeth have been stained slightly yellow and it can squeak and move its head around to mimic gestures from a real bottlenose dolphin.