New species of pterosaur discovered with a ‘unique’ beak 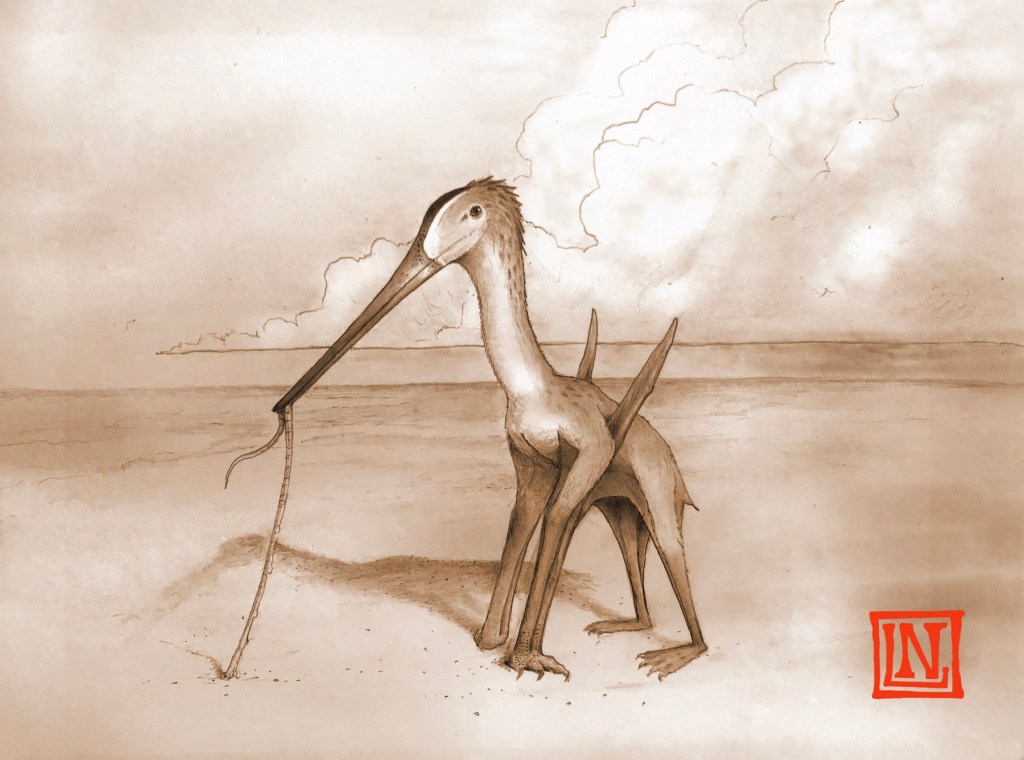 Scientists have discovered a new species of pterosaur with a uniquely shaped beak.

Leptostomia begaaensis was a similar size to a turkey and used its long beak to probe dirt and mud for hidden prey.

A fossilised piece of beak from the creature was initially assumed to be part of the fin spine of a fish.

However, a team of palaeontologists from the universities of Bath and Portsmouth noticed it had an unusual texture and realised it was a fragment of beak instead.

Pterosaurs are the less well-known cousins of dinosaurs. More than 100 species of the long-winged reptiles – some as large as a fighter jet and others as small as a sparrow – are known.

Professor David Martill, of the University of Portsmouth, said: ‘We’ve never seen anything like this little pterosaur before.

‘The bizarre shape of the beak was so unique, at first the fossils weren’t recognised as a pterosaur.’

Additional searching of the Kem Kem beds in Morocco, where the original bone was found, revealed additional fossils of the animal.

The scientists used a computerised tomography (CT) scan to reveal a network of internal canals in the beak for nerves that would have helped detect prey underground.

This suggests that Leptostomia begaaensis used its beak to probe dirt and mud, hunting like present-day sandpipers or kiwis to discover worms, crustaceans or even small hard-shelled clams.

Some of these birds forage in earth and others among beaches and tidal flats – both environments that Leptostomia begaaensis could have used to find food.

However, its presence in the Cretaceous age Kem Kem strata, representing a rich ecosystem of rivers and estuaries, suggests that it was drawn there to feed on aquatic prey.

Prof Martill said: ‘The diets and hunting strategies of pterosaurs were diverse – they likely ate meat, fish and insects. The giant 500-pound pterosaurs probably ate whatever they wanted.

‘Some species hunted food on the wing, others stalked their prey on the ground. Now, the fragments of this remarkable little pterosaur show a lifestyle previously unknown for pterosaurs.’

Scientists say Leptostomia begaaensis may have been a fairly common pterosaur, with pieces of it discovered over many years, but its identity has not been known until now.

Dr Nick Longrich, from the Milner Centre for Evolution at the University of Bath, said the discovery of a new species shows that there is much more to learn about pterosaurs.

‘Pterosaurs flying over water to hunt for fish tend to fall in and die, so they’re common as fossils.

‘Pterosaurs hunting along the margins of the water will preserve more rarely, and many from inland habitats may never preserve as fossils at all.’

Dr Longrich said there was a similar pattern in birds, with aquatic species such as penguins, puffins and ducks more likely to be found as fossils than land birds such as hummingbirds, hawks and ostriches.

He added that the trend of discovering more species of pterosaurs with diverse lifestyles is likely to continue.

The paper is published in Cretaceous Research.