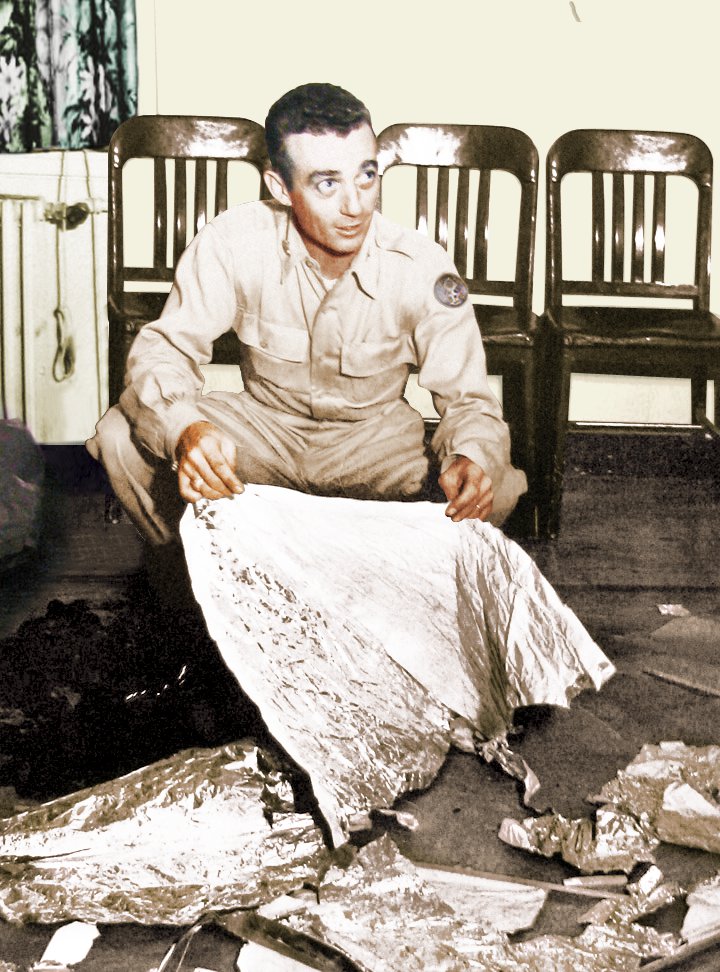 The journals of the man who investigated the famous Roswell crash site in New Mexico have been opened for the first time.

Intelligence officer Jesse Marcel Sr. was the first on the scene, back in 1947, and his job was to examine the strange wreckage found in the dirt.

The metallic-looking debris was littered across the ground and, before long, the ‘UFO’ made national headlines across the world.

At the time, the US government gave the official conclusion that the wreck was from a weather balloon that had crashed. But Marcel believed it was extra-terrestrial in origin.

‘The intelligence office of the 509th Bombardment Group at Roswell Army Air Field announced at noon today, that the field has come into the possession of a Flying Saucer,’ Roswell Daily Record reported on July 8, 1947.

Marcel, who died in 1986, was made a scapegoat for the ‘UFO’ conspiracy theories, but now his journals have been revealed for the first time.

His grandchildren, Jesse Marcel III and John Marcel, spoke exclusively to DailyMail.com to reveal their grandfather never wavered nor changed any details of what he saw that day.

‘He was made to be the fall guy,’ Jesse said, and he claimed his grandfather was ‘ordered’ to deny what was really at the crash site.

‘He was the head of intelligence in Roswell, New Mexico and followed his orders.’

Marcel, who played a key role in dropping the atomic bombs over Hiroshima and Nagasaki in 1945, completed training on weather balloons and Jesse said that seeing one in the field and not being able to identify it was ‘preposterous.’

‘He had examined the debris in the field and determined it was not made by human hands,’ Jesse continued.

The only physical evidence left of this mystery is Marcel Sr.’s journal, which is set to be revealed during the History Channel’s three-part series ‘Roswell: The First Witness’ airing Saturday, December 12.

‘What’s interesting is that the journal moved from grandfather’s hands, to our father’s and now to ours,’ said Jesse.

‘Inside is a bunch of rambling that doesn’t really fit with who our grandfather was.’

The show follows the investigation of the Marcel children, along with the host and former CIA operative Ben Smith.