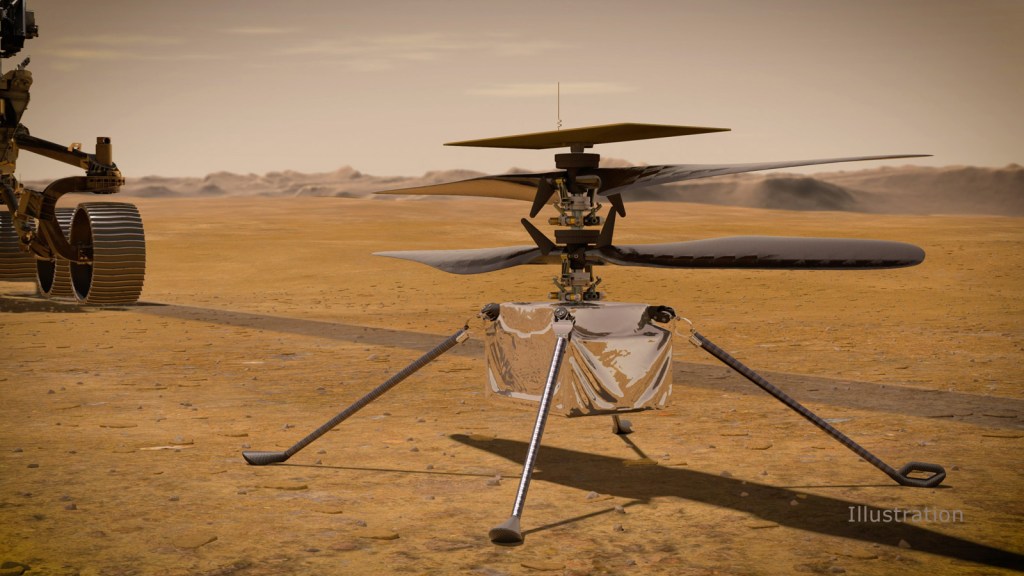 Nasa has announced the first flight of its Mars helicopter, Ingenuity, will take place ‘no earlier than April 8’.

Ingenuity, which has been bolted onto the underside of the Perseverance rover since it arrived on the red planet on Feb 18, will soon deploy to survey the planet.

On Sunday, Perseverance removed Ingenuity’s protective landing shield, and the spacecraft is now on its way to a designated Mars launchpad.

The helicopter isn’t very big – just 1.8kg – but will be the first helicopter flown on a foreign planet for all of human history.

Once the mission has started, the Earth-bound team will have 30 Martian days, or sols, to complete the flight.

‘As with everything with the helicopter, this type of deployment has never been done before,’ said Farah Alibay, Mars Helicopter integration lead for the Perseverance rover.

‘Once we start the deployment there is no turning back. All activities are closely coordinated, irreversible, and dependent on each other.

‘If there is even a hint that something isn’t going as expected, we may decide to hold off for a sol or more until we have a better idea of what is going on.’

But, if no obstacles crop up, then the helicopter will deploy from the rover and hover above the ground for around 30 seconds, before descending and touching back down.

Once the helicopter has successfully landed, the Nasa team will be able to measure the success of the mission.

But the mission will not be easy – flight on a planet that isn’t Earth is full of challenges.

First, the atmosphere is only 1% as dense as Earth, making it difficult to generate the lift required to get off the ground.

Then the night-time temperatures, which can drop to as low as -90C, can be catastrophic for Ingenuity’s electrical circuits.

‘Every step we have taken since this journey began six years ago has been uncharted territory in the history of aircraft,’ said Bob Balaram, Mars helicopter chief engineer at NASA’s Jet Propulsion Laboratory in California.

‘And while getting deployed to the surface will be a big challenge, surviving that first night on Mars alone, without the rover protecting it and keeping it powered, will be an even bigger one.’

PrevPreviousMen’s penises are shrinking because of pollution
NextPompeii villagers would have died in just 15 minutes, study findsNext