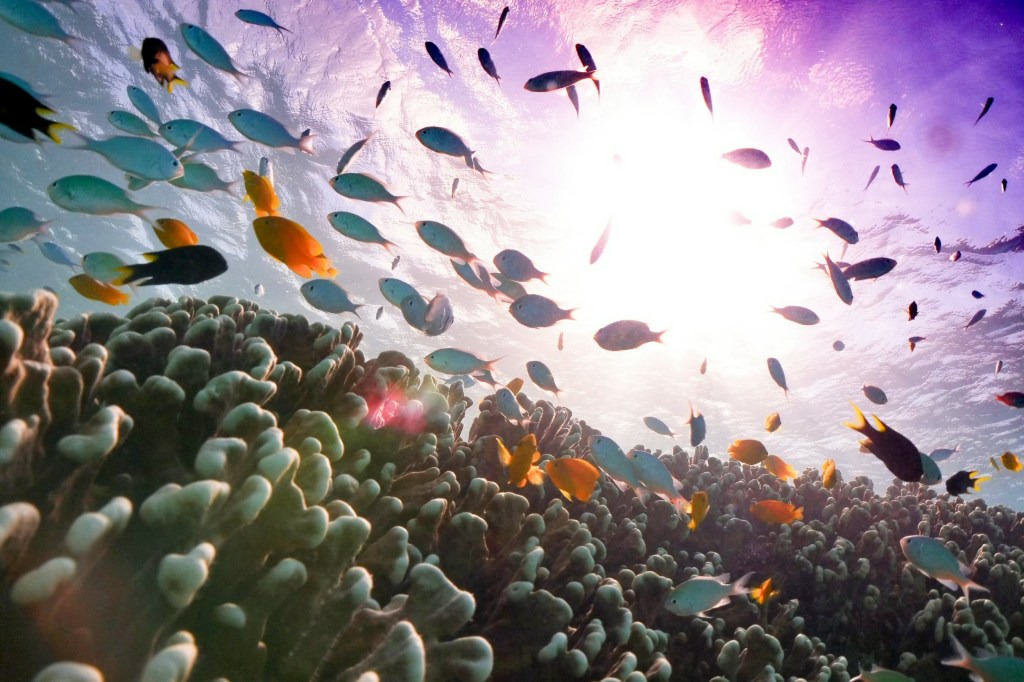 A vast chunk of coral reef has been discovered near the Great Barrier Reef by researchers in Queensland, Australia.

The towering ‘blade like’ reef, discovered by scientists aboard the Schmidt Ocean Institute’s Falkor ship, is almost 500 metres tall and three times as wide – much taller than any of London’s largest skyscrapers.

Situated six kilometres from the main body of the Great Barrier Reef, the coral is the first of its kind discovered in the region for more than 100 years.

The reef, found on October 20 on the northern seafloor of the Great Barrier Reef, was picked up as scientists scanned the area using the underwater robot ‘SuBastian’, as part of a year-long survey of Australia’s waters.

The enormous structure reaches to just 40 metres below the ocean surface at its shallowest.

Though the reef is bedded to the ocean floor off North Queensland, it is ‘detached’ from the main body of the Great Barrier Reef.

Detached reefs like this can act as isolated ‘seamounts’, with the potential to evolve unique marine life, separated from other coral ecosystems by vast tracts of deep water, according to Dr Robin Beaman, who led the team of scientists from James Cook University.

A detached reef of this size hasn’t been discovered since the late 1800s, when a cluster of seven other reefs were mapped in the same area.

One of these reefs, at Raine Island, is the world’s most important green tea turtle nesting site.

However, the marine ecosystem living at the top of the reef discovered last week appears to be more vivacious than others, according to research leader Robin Beaman of James Cook University.

‘It’s got a thriving coral community at the pinnacle. When we got to the crest of it — it’s only about 300 by 50 metres wide — we found a lot of fish and a healthy shark population too,’ said Beaman.

One reason we can’t say exactly how rare this discovery is is that so much of the ocean remains unmapped.

‘To find a new half-a-kilometre tall reef in the offshore Cape York area of the well-recognised Great Barrier Reef shows how mysterious the world is just beyond our coastline,’ said SOI executive director Dr Jyotika Virmani.

Researchers will continue to survey the underwater area until 17 November, as the SOI ship Falkor continues its year-long trawl of Australia’s oceans.

As well as the new reef, the Falkor has also discovered up to 30 new species, including a 45m-long siphonophore found in April touted as ‘the longest recorded sea creature’, species of black coral and sponges and Australia’s first observation of ‘rare scorpionfish.’

These discoveries are made all the more important given the Great Barrier Reef’s extensive coral bleaching over recent years.

What is coral bleaching?

The Great Barrier Reef, the most spectacular and extensive coral reef ecosystem on earth, was marked as a world heritage site by UNESCO in 1981

But in recent years, the reef has been extensively damaged by coral bleaching.

Bleaching, which kills the reef, occurs when rising sea temperatures cause the coral to expel the algae living inside them, which typically provide up to 90 percent of the coral’s energy.

More than half the living coral in the Great Barrier Reef has been lost since 1995 due to warmer waters, most likely driven by climate change according to recent studies.

However, Dr. Robin Beaman, who led the research, said this detached reef didn’t display any evidence of damage, but was instead a “blizzard of fish” in a healthy ecosystem.

Situated off of Australia’s northeast coast, the Great Barrier Reef runs 2,300 km (1,429 miles), spans an area three times greater than England, and is the world’s largest coral reef, home to more than 1,500 species of fish, 411 species of hard corals and many other species.

PrevPreviousNasa looks to visit an asteroid as valuable as the global economy
NextiPad Air (2020) review: the best iPad you should buy right nowNext