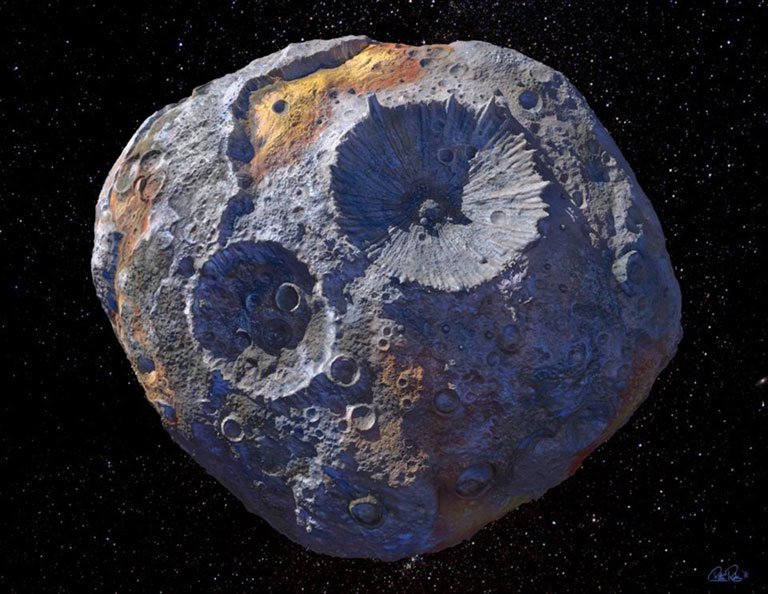 An asteroid Nasa plans to visit may contain iron and nickel worth more than the entire world economy, according to new observations by the Hubble Space Telescope.

The asteroid Psyche 16, which is 230 million miles from Earth, is one of the heaviest objects in the Solar System’s main asteroid belt between Mars and Jupiter.

At 140 miles wide, it may contain so much iron and nickel that it could be worth as much £7 quintillion at today’s metal prices – enough for each person on Earth to be a billionaire.

However, if metal reserves of that quantity were discovered and mined, it would likely cause metal prices on Earth to collapse from the economic law of supply and demand.

Psyche 16 is the destination of Nasa’s next space exploration mission, due to arrive in January 2026, where it will map the asteroid’s metallic surface in orbit for 21 months.

Though first discovered in 1852, it’s only recently that the true potential value of Psyche 16 has been established.

Psyche 16 appears to be almost entirely metallic, according to a paper published in the Planetary Science Journal this week.

Thanks to the Hubble Space Telescope, which has the power to see hundreds of millions of miles into space, Dr. Tracy Becker of the Southwest Research Institute in San Antonio, Texas, found evidence of the asteroid’s largely metallic make-up.

“We’ve seen meteorites that are mostly metal, but Psyche could be unique in that it might be an asteroid that is totally made of iron and nickel,” said Dr. Tracy Becker of the Southwest Research Institute in San Antonio, Texas, who authored the study.

It’s thought the meteorite might be the leftover core of a planet that failed to form during the formation stage – what’s called a protoplanet.

Based on observations of light emitted from the asteroid, Becker was able to conclude that the vast asteroid contained huge quantities of iron.

‘We were able to identify for the first time on any asteroid what we think are iron oxide ultraviolet absorption bands,’ said Becker.

‘This is an indication that oxidation is happening on the asteroid, which could be a result of the solar wind hitting the surface.’

This solar wind is a stream of highly energetic, charged particles ejected from the Sun’s high temperature, outer atmosphere, ripping off atoms from the asteroid’s iron surface – a phenomenon called ‘space weathering.’

Though Becker observed the asteroid’s surface as potentially pure iron, there is a chance the iron may have dominated ultraviolet observations, meaning there might be as little as 10% surface iron.

This would still be more iron than all the current reserves on Earth put together.

Many questions still remain about the composition of Psyche 16, such as a peculiar ‘UV brightening’, where the asteroid appears increasingly reflective at longer wavelengths

‘This is something that we need to study further,” said Becker.

‘This could be indicative of it being exposed in space for so long. This type of UV brightening is often attributed to space weathering.’