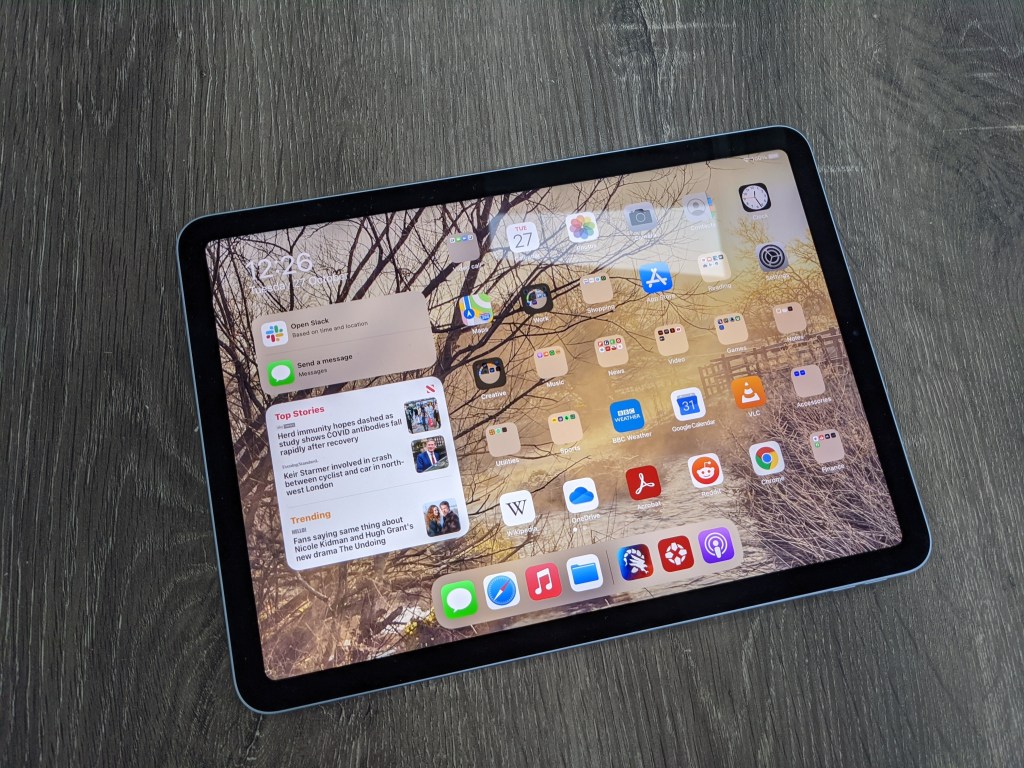 If you’ve committed to the idea of buying or upgrading an iPad and are trying to decide which one to get, then the newly-announced iPad Air is it.

The 2020 version of the iPad Air has the crucial features of the current iPad Pro without the price tag and is a more accomplished and usable iPad than the standard £329 basic iPad. It’s the middle-of-the-road choice and for most people, the one to go for.

I know that £500 (the iPad Air’s starting price) is still a lot to ask, but if you can afford it, the benefits are plentiful.

The design of the iPad Air mirrors the iPad Pro and the iPhone 12. It’s got the squared-off, boxy look with dramatically thinner bezels than the regular iPad. So even though the footprint of the device is similar, you get much more screen real estate for your money.

The iPad Air comes in one size: 10.9-inches which, for me, is the sweet spot between the iPad’s 10.2 inch screen and the larger iPad Pro’s 12.9-inch screen. If you use an iPad like I do (on fold-down tables on trains or airplanes or perched at the bar at a pub) then you’re going to mightily approve of the design choices.

What’s more, Apple has added the stereo speakers and USB-C port from the Pro too.

The latter is a huge deal – it means you can use the iPad Air with a range of accessories and benefit from 5Gbps data transfer speeds. It future-proofs it as well because USB-C will ultimately become the new universal format even though Apple holds on to Lightning with the iPhone 12.

The new design means the Air also works with Apple’s second-generation (£119) Apple Pencil and the brilliant Magic Keyboard. The bad news is both of those are sold separately and aren’t cheap.

The iPad Air comes in a choice of five different colours: Silver, space grey, rose gold, green and sky blue. The tablet weighs 458 grams – the lightest iPad you can buy and befitting the ‘Air’ moniker. It’s made from recycled aluminium and just feels very premium when you hold it.

Not all of the design has been carried over from the Pro. There’s no FaceID from the front-facing camera on the Air. Instead, Apple has put a Touch ID fingerprint sensor into the power button. You’ll need to press the power button and keep your finger there a moment or two longer for it to read your print and grant you access.

I’ve become a huge user of FaceID since it was introduced so it took a while to get back to reaching for a fingerprint scanner. But I expect many iPhone users will recalibrate after a couple of weeks with the iPad Air.

Camera tech in general isn’t as beefy on the Air as the Pro, which is fine with me as I don’t use the iPad much for camera work beyond as a second screen for videoconferencing.

To that end, you get a 7-megapixel front-facing camera and a rear-facing 12-megapixel camera. It’s perfectly serviceable and Apple keeps the cost down by not loading the Air with the kind of LiDAR tech you get in the iPad Pro.

Inside the Air is Apple’s A14 Bionic processor that also powers the new iPhone 12 range. It’s incredibly snappy and in some cases can outperform even the A12Z chip inside the iPad Pro.

However, the iPad Pro has more grunt when it comes to graphics which comes into play with heavy-duty tasks like editing photography, visual programming and playing graphically intensive games.

The only other real difference that Pro users may notice when using the Air is the drop in refresh rate of the screen. The iPad Pro has a 120Hz ‘ProMotion’ display that comes into its own when you’re scrolling websites, articles or other documents. On the iPad Air, you’re limited to a 60Hz refresh rate, which is a shame.

Not to say that the Air is a slouch in any way. I found it would handle anything I threw at it without breaking a sweat.

Even with a full workload, the battery performance also held up. I could get through a nine hour day of writing, video conferencing, streaming music and playing the occasional game before the iPad Air gave up on me.

Apple includes a 20W USB-C power adapter with the Air that’ll charge the tablet to full in two and a half hours.

The iPad Air comes running the latest version of iPadOS, which includes a few neat little software tricks. You can use a feature called ‘Scribble’ to hand write in any box with the Apple Pencil and have it turned into normal text. There’s also the option of adding widgets to the homescreen and more desktop-like apps in the extensive iPad library.

So, the question really comes down to whether or not you should buy one? If you can stretch to the extra £250 over the standard iPad (8th generation) then unquestionably this is the iPad to go for. The design, performance and features are all leagues better and will win out over the long term. Just be wary that to extract the full potential, you’ll likely have to spend more for the accessories.

Whether you want it for working or for entertainment, I feel the iPad Air (2020) is the ultimate all-rounder in Apple’s line-up. I have my love for the iPad mini but this is definitely the one to go for if you’re planning an upgrade.