From lab-grown meat to robot baristas, how Covid is changing the future of our food 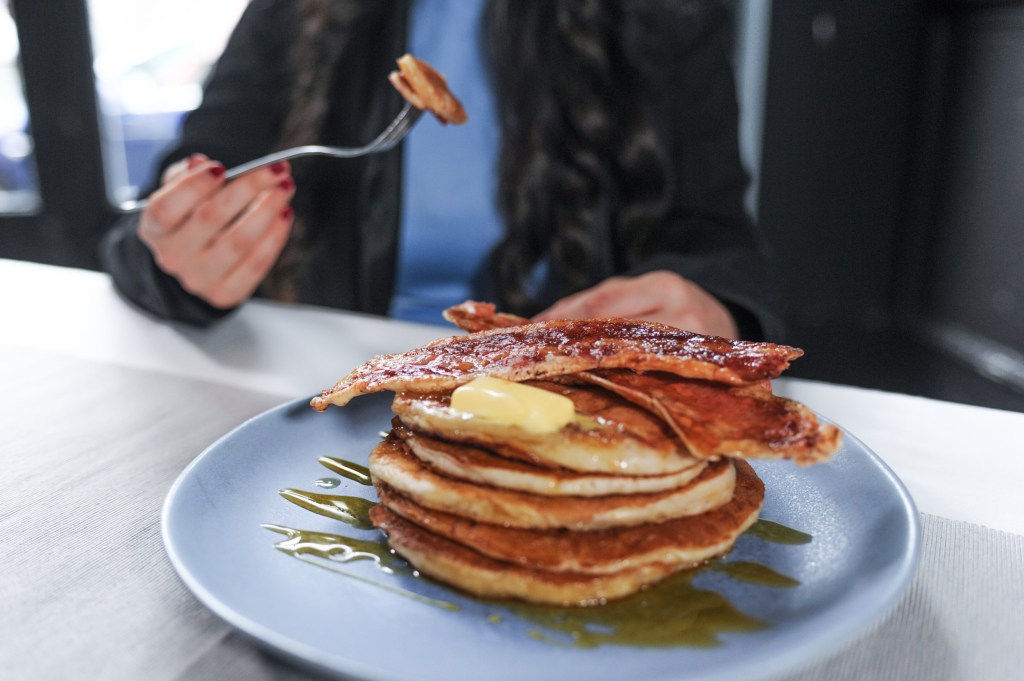 From seasonal vegetables in vending machines, to robo-barristas and thermo-scanners, Covid-19 is changing the future of our food – and it’s not all bad.

Gareth May tucks into the tech fuelling the rise of conscientious grub.

Challenging people’s bad dietary habits and consumption choices may be one of the sole good things to come out of the Covid-19 pandemic.

While a lean towards bulk-friendly storable items, such as beans and rice, and a surge in vintage cookery skills, like making pasta and pickling, are understandable fads of the Covid Era, there’s also evidence of a real shift in consumer behaviour regarding how a lot of us regard our food.

According to data from the Soil Association, in the early weeks of the UK lockdown, organic food sales increased by nearly 20 per cent.

While a recent YouGov survey has revealed 42 per cent of us now value food more than we did before the crisis, with buying locally grown produce and an increased focus on healthy eating two lockdown trends we’ll merrily keep munching on.

In the wake of virus outbreaks in US meat processing plants, the ‘big meat’ industry faces a $20billion annual loss as worried consumers forego the environmental footprint of conventional livestock farming for vegan meat alternatives (sales skyrocketed in the spring by 280 per cent on the year).

In the UK, plant-based meat alternatives – typically made from pea, soy and rice protein, refined canola and coconut oil – have increasingly become familiar, with US biotech giant Beyond Meat’s burgers stocked on supermarket shelves since 2018.

Meanwhile UK vegan brand THIS, with its realistic looking chicken goujons and bacon, arrived in stores this summer.

The fast food sector also got in on the act in January when Burger King launched the Rebel Whopper, comprising a patty made from sustainably sourced soya.

Experts say the plant-based food industry could hit $74.2billion by 2027.

As the pandemic sheds light on the connection between public health and the traditional meat-eater supply chain, there’s an opportunity for other sectors to capitalise, not least the one-time golden child of slaughter-free alternatives – cultured, or lab-grown, meat.

While plant-based alternatives make it on to shopping lists, tissue-engineered meat (beef or chicken produced from animal-sourced starter cells in controlled environments) has been working hard to overcome its growing pains.

Premium conscientious meat could be a game-changer for the clean meat movement.

EatJust, Inc – the US company known for its liquid vegan egg substitute made from mung beans – is working with Japanese company Toriyama to source cells and grow a slaughter-free version of its famous marbled beef, wagyu.

‘Project Carpaccio’, named because of its similarity to the Italian meat delicacy, involves the formulation and production of what Meat-Tech call ‘bio-inks’, designed to print fat and muscle cells to ultimately form consumable – and tasty – meat.

Likewise, in big news for fast-food consumers in Russia, KFC will test lab-grown chicken nuggets made in partnership with 3D Bioprinting Solutions in Moscow this winter.

Us Brits are more likely be wowed by the humble bacon sarnie, so big applause to start-up Higher Steaks, which produced the world’s first lab-grown bacon in July.

The Cambridge firm expects to host a tasting event this year to showcase the world’s first lab-grown rashers, pairing 70 per cent cultivated meat with 30 per cent plant-based product.

The best of both worlds – and perhaps a vision of our ‘meat’ eating future?

How we eat is changing

If Covid is changing what we eat, it’s also changing how we eat. The hospitality industry has now mostly begun to open up once again.

It’s been bolstered by the government’s Eat Out to Help Out discount scheme (taken up by over 72,000 restaurants), but also by technology turning the dine-in experience into one as touch-free as possible.

Out go paper menus, in come QR codes. The barcode-esqe squares have been around since the 90s but now they’re having a real moment, stuck on pub walls and taped to tables, directing restaurant-goers to online menus, booking pages or fill-out forms for contact-tracing, reducing staff interaction and bar-gathering crowds in pubs and restaurants. Other establishments have switched entirely to table service with ordering over an app at your table now the norm.

Other innovations are forging new habits. At Thorneybank Farm Shop in Aberdeenshire self-service vending machines, dispensing the likes of cake, fresh fruit and whole chickens, are proving a hit with shoppers keen to use the uber-hygienic system where the goods are neatly tucked away in refrigerated units behind secure glass doors.

In the US they’ve even started to pay with their face. Californian company PopID is rolling out a system based on facial recognition at local restaurants.

Customers sign up on their phone, take a selfie and add cash to their Pop Pay account. When it’s time to pay, they look into the camera of a tablet and the cashier verifies the transaction and takes the money.

Automation could add further distance. Robot baristas and micro-cafes include Crown Coffee in Singapore, US companies Briggo and Truebird and Russia’s Monty Cafe and Fibbee. Their proposition is simple: a hot cappuccino served fast.

Getting recommendations from people you know and trust is the perfect security blanket for those vulnerable to the virus.

Meanwhile, in Ireland, a cloud-based GPS app is helping hospitality businesses get on top of social distancing rules.

Ordee allows publicans and cafe owners to monitor how many people are on their premises and also gives other users a real-time update of space available at nearby eateries.

Other technologies take things to the extreme. In New York, the Brooklyn Dumpling Shop asks restaurant goers to step through a thermo-scanner and UVC sanitation light.

Coined the Zero Human Interaction (ZHI) restaurant experience, if your temperature exceeds 99.7 degrees, you won’t be allowed in. Strict perhaps. The future? We’ll have to wait and see.

The future of food shopping

Drone delivery
From medical supplies to fresh food, the aerial capability of drones is increasingly enticing to delivery companies. With the news that Amazon has received approval from the US government to deliver packages by drones — and successful trials by Uber Eats and Just Eat — you can expect regulatory restrictions to lift in more countries, opening the way for large-scale adoption.

Smart shopping carts
Amazon opened its first Fresh store in Los Angeles last month. Boasting click and collect and an Echo in every aisle, the supermarket also features a smart shopping trolley. The Dash Cart combines a computer vision algorithm and sensors to identify items placed in the trolley with customers logged into an Amazon account automatically paying as they exit the store.

Bug menu
Small-scale insect farms have arrived in the UK. Horizon Edible Insects in west London produces mealworms and crickets selling to Mexican restaurants. The insect livestock are fed on cast-off fruit and vegetables, placed in a fridge to encourage hibernation, before being ‘slaughtered’ in the freezer. Once ground down to a fine powder, insects can add a punch of protein to porridge or bread.

Going vertical
Boosting crop yield in limited, often urban, spaces, vertical farming could be the future of feeding the masses. The brand Infarm recently partnered with M&S to bring a wide selection of herbs in store, from baby pak choi to mini mountain coriander. The hyper-local model produces herbs actually grown in the shop, offering the freshest possible ingredients while also being very environmentally friendly.

PrevPreviousWhat is Triller and how is it different to TikTok?
NextHow to get a better sleep using these latest gadgetsNext