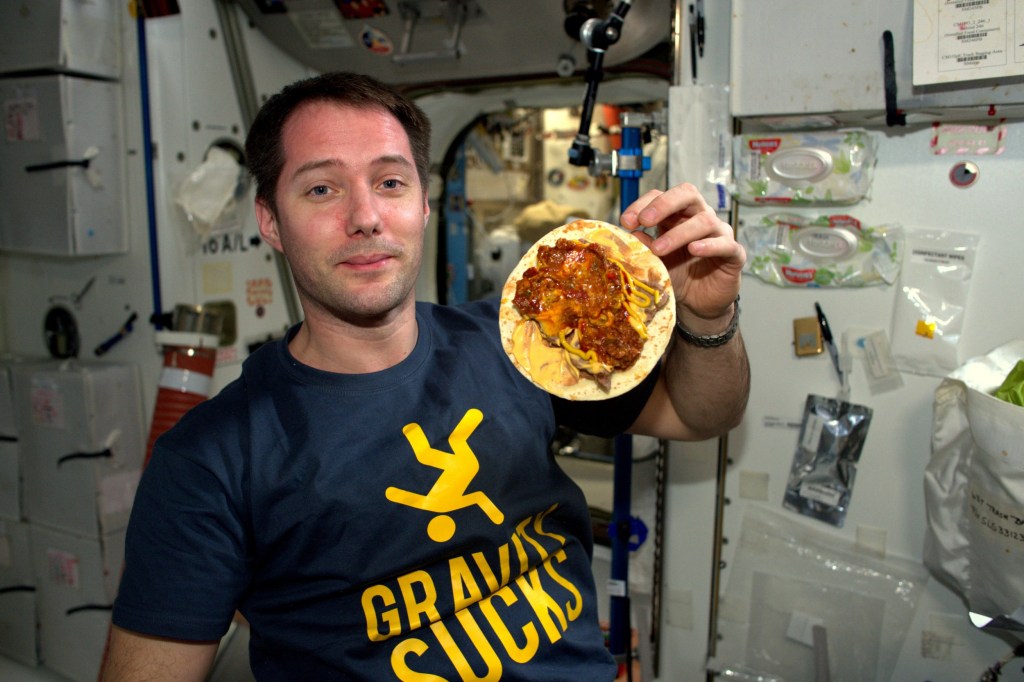 In a world first, French astronaut Thomas Pesquet will board a SpaceX rocket to the International Space Station (ISS) next month – the first European to do so.

Set to launch on April 22, Pesquet will board a Falcon 9 rocket from SpaceX’s Florida launchpad, tucking into beef bourguignon as he soars through the Earth’s atmosphere.

During the final month of his stay Mr Pesquet will be commander of the ISS.

And he’s already looking forward to some of the food he will have while in orbit.

Speaking at an ESA briefing, Mr Pesquet said: ‘It’s a European tradition, every time a European flies to space there is usually food from his home country, some dishes that are made from a chef or from whoever.

‘You could have your grandmother make your food if you wanted to, and maybe I should have had her done that.’

The astronaut had given Michelin-starred chef Thierry Marx a list of the foods and tastes he likes, including some from his childhood, and a menu has been created for the space mission.

Mr Pesquet said: ‘There’s going to be six dishes in total that I’m hoping to share with my crew members.

‘There’s a lot of expectations – you send a Frenchman into space, obviously all my colleagues are expecting good food.

‘I’m a terrible cook myself but it’s OK if people are doing it for me.’

He joked there would be a dish like French risotto, but he could not call it that because he would be stripped of his French citizenship as risotto is Italian.

‘I don’t want to spoil all the recipes, I need to keep some surprises.

‘But there’s basically two full meals that I’m looking forward to sharing with my crew mates and maybe trading against some other food, there’s a lot of trading of food that happens on the space station.’

Referring to these, the ESA astronaut said medical experiments were his favourite to conduct, and he was looking forward to studies on protein plasma which would look at how antibiotic resistance could be treated, and another on protein crystals for treatment of many conditions.

Mr Pesquet said: ‘There’s also one that involves mini brains which I think is crazy – it’s sounds like science fiction.

‘But we will take up, I think, eight mini brains.

‘So it’s just brain cells that are put together in a kind of a self containing structure and then we’ll study the effect of the space environments as a model for ageing on those brain cells.

‘Then we’ll send them back to the laboratories and they can learn a lot about how the brain ages with time.’

The mission is called Alpha after the star Alpha Centauri, located in the same system as Proxima, the name of Mr Pesquet’s first mission.

This is the second crew rotation flight with astronauts on the Crew Dragon spacecraft and the first launch with two international partners as part of the Nasa’s commercial crew programme.

After successfully docking at the space station, the astronauts of Crew-2 will join the Expedition 65 crew aboard the orbital outpost, including the Crew-1 astronauts still aboard.

The Crew-1 astronauts are targeted for return in late April or early May.