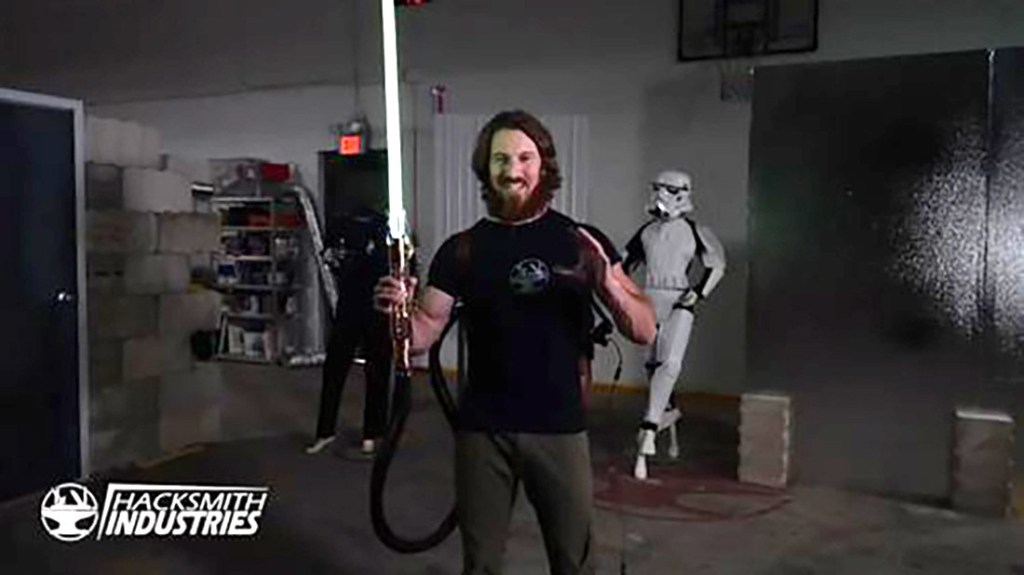 If you’ve ever dabbled with a bit of custom metalwork, you may be quite chuffed at the nice workbench or model tank you made.

Then you take a look online at what Canadian engineer and YouTuber James Hobson has been up to and realise you’re way off the big leagues.

For his most recent project, Hobson built a real-life lightsabre that heats up to 4,000°C and cuts through metal. The video of him creating the fully retractable plasma beam has been watched over 11 million times.

To create the Star Wars weapon, the engineers used liquid petroleum gas – commonly found in barbecues. The liquid fuel is mixed with oxygen and turned into a superheated beam of plasma via laminar flow, a physical phenomenon which allow liquids to flow smoothly.

The gas travels through a tube from a custom-built backpack into a nozzle shaped like the famous Jedi weapon.

‘We need a large array of laminar flow nozzles to create highly concentrated flow of gas to create a plasma beam,’ Hobson says in the video.

The YouTuber – known as ‘the Hacksmith’ – is even able to turn the blade different colours. Adding sodium chloride makes the plasma turn blue, just like Obi-Wan Kenobi’s original lightsaber in the 1977 film.

To show how devastatingly effective the blade is, the team proceed to cut through solid metal in front of the camera.

If you haven’t seen it already, it’s definitely worth twenty minutes of your day to see the archetypal childhood dream of owning a real life lightsaber become reality.