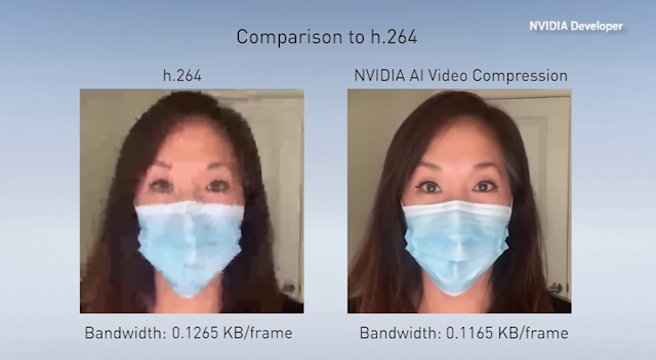 But also, all the new video conferencing meetings post-Covid are sucking up monumental amounts of bandwidth.

Which is probably why the clever types at Nvidia (the folks known for making graphics cards for PCs) have come up with a solution.

It’s called ‘Maxine’ and it’s a tool that uses artificial intelligence to basically deepfake your face during video conferencing calls.

In a nutshell, Maxine will analyse key ‘facial points’ of people and then reanimate faces digitally during the meeting. This allows the video quality to be dropped (thereby reducing the bandwidth) but to all intents and purposes the image quality stays the same.

According to Nvidia, this technology uses one-tenth of the bandwidth of a regular video call. Because the program is running remotely in the cloud, it also doesn’t require any processing power from your computer.

Since there are 10 million video calls happening at any one moment, inventing some tech to ease up the data load seems sensible to us.

And if HAL 9000 could take the morning team meeting with the boss completely off our hands, so much the better. Unfortunately (for the moment at least) it looks like you still have to be present on the call so Maxine can map the key facial points while you’re talking. Even if it then replaces it with an animated character or shifts your mug so you’re actually looking at the screen rather than the camera.

‘We’ve all experienced times where bandwidth has been a limitation in our conferencing we’re doing on a daily basis these days,’ Nvidia’s general manager for media and entertainment Richard Kerris, told The Verge.

‘If we apply AI to this problem we can reconstruct the difference scenes on both ends and only transmit what needs to transmit, and thereby reducing that bandwidth significantly.’