Bizarre underwater ‘squidbot’ is a breakthrough in soft robotics 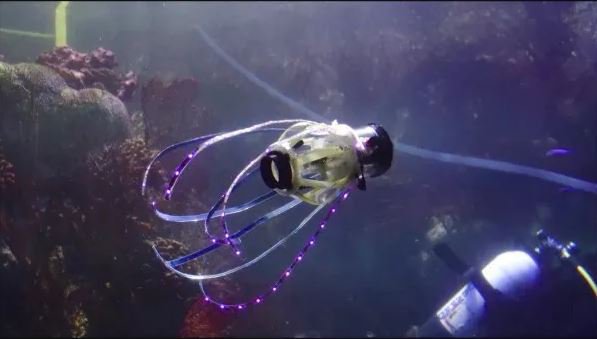 An underwater robot nicknamed ‘squidbot’ could form the basis for a new kind of underwater propulsion system.

The deep-sea robot sucks water into an on-board pressure chamber and ejects it to move itself around beneath the waves.

Much of the robot is made from soft materials to allow it to swim about around coral without causing any damage.

‘This is the first untethered robot that can generate jet pulses for rapid locomotion like the squid and can achieve these jet pulses by changing its body shape, which improves swimming efficiency,’ said Michael Tolley, a professor at the University of California San Diego.

The research team, which includes roboticists and experts in computer simulations as well as experimental fluid dynamics, turned to cephalopods as a good model on which to base their ‘bot.

The squidbot takes a volume of water into its body while storing elastic energy in its skin and flexible ribs. It then releases this energy by compressing its body and generates a jet of water to propel itself.

They clocked the robot’s speed at about 18 to 32 centimeters per second (roughly half a mile per hour), which is faster than most other soft robots.

‘After we were able to optimize the design of the robot so that it would swim in a tank in the lab, it was especially exciting to see that the robot was able to successfully swim in a large aquarium among coral and fish, demonstrating its feasibility for real-world applications,’ said Caleb Christianson, who led the study as part of his Ph.D. work in Tolley’s research group.

PrevPreviousGoogle Nest Audio review: Have a word with my assistant
NextDeepfaking video calls saves bandwidth and rescues you from bad meetingsNext