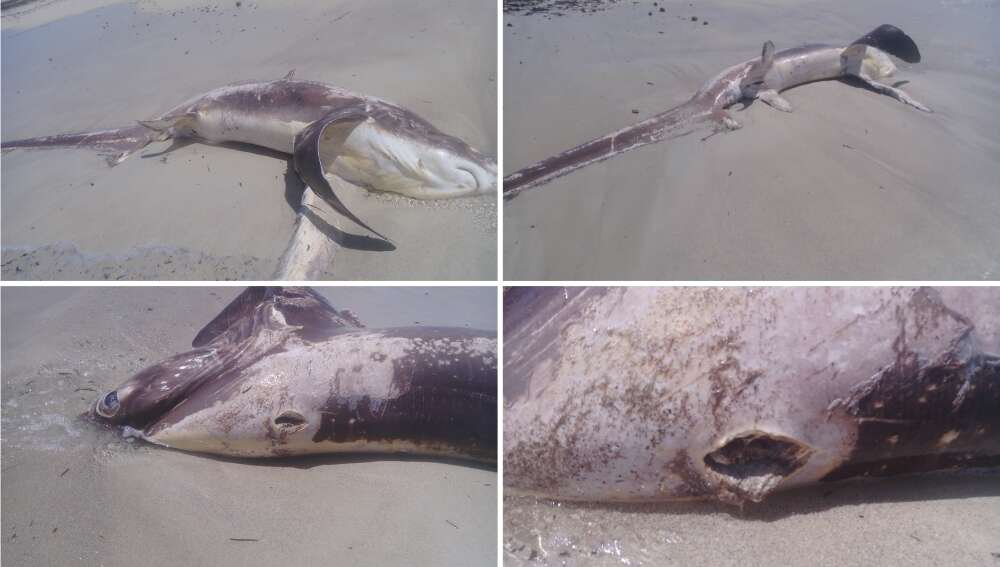 A shark has washed up on a Libyan beach with an 11-inch swordfish ‘blade’ stuck in its back.

The blade was in fact the rostrum (the nose) of a swordfish.

The carcass was found by a local resident who spotted it at the end of the beach. Citizen scientists who pored over the subsequent photos imagined the swordfish that took down the shark could have measured up to six feet long.

It’s estimated the shark had been killed about three days before.

A study, published in the journal Ichthyological Research, following the find stated the rostrum belonged to the swordfish Xiphias gladius: ‘a highly mobile, predatory fish known to attack sharks, whales, humans and even boats.’

Attacks like this have been documented since the 1960s.

The shark, a thresher shark, was a little over 14-feet long.

‘The rostrum penetrated the shark in an acute angle of approximately 70 degrees to the anterior–posterior axis, directed towards the branchial apparatus, revealing that the swordfish must have been positioned dorsally from the shark and pierced it from behind,’ the study reads.

‘This colouration was faded by the date of the second inspection three days later,’ researchers shared in the study.

‘The location of the injury, timing of wound infliction and lack of other apparent injuries lead us to the conclusion that the impalement was fatal and the ultimate cause of death for the thresher shark.’

The team notes that most of the attacks on sharks are done by juveniles, but the thresher shark was an adult and nearly the same size as the swordfish.

‘The swordfish involved in the current attack was not a juvenile, but roughly the same size as the thresher shark and, therefore, does not fit into its prey spectrum, which makes an attack as a defensive response unlikely,’ according to the paper.