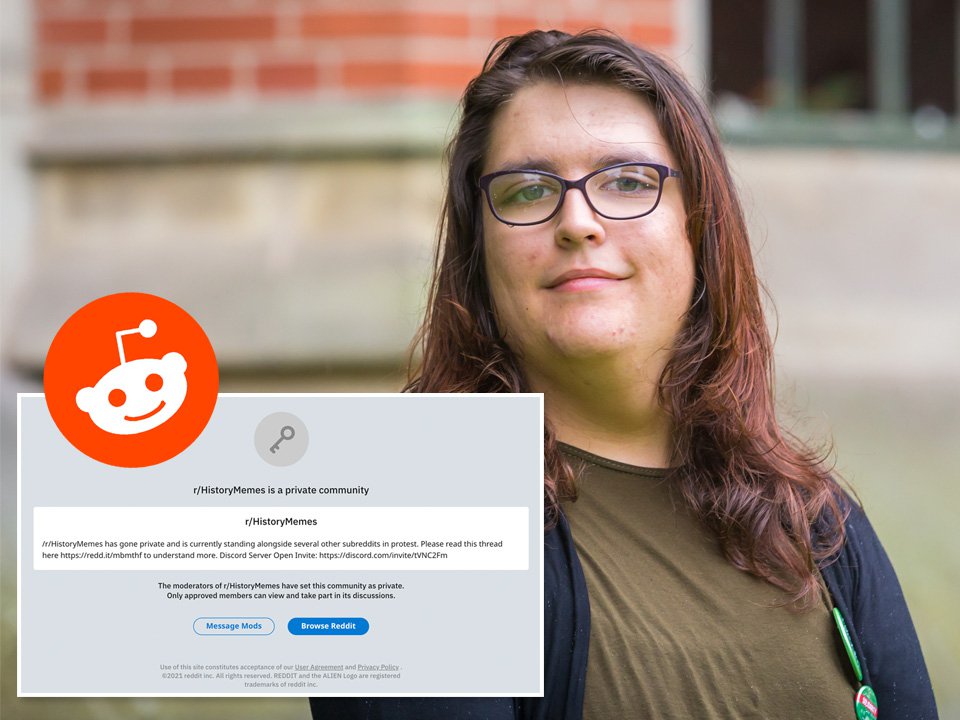 Dozens of subreddits have been made private in protest at the forum’s ‘censorship’ and decision to continue to employ a controversial admin.

A moderator was banned and then reinstated after sharing an article which mentioned Reddit employee Aimee Challenor, despite not being aware that she worked for the site.

This spiralled into a wider discussion about her suitability for the role, and the moderation policies applied across the forum.

Many users claim that Ms Challenor showed poor judgment and is not the right person for the role, as in 2017 she had hired her father as a campaign manager in politics after he had been charged with raping a 10-year-old girl at the home they shared some of the time.

David Challenor was found guilty at Warwick Crown Court of ‘depraved’ crimes, including dressing as a baby and tying the girl, aged 10, to a beam, before whipping her and giving her electric shocks.

Ms Challenor, who was running for deputy leader for the Green Party in 2017, was suspended over this issue while the party investigated. She then resigned, accusing the Greens of transphobia.

In 2019 after joining the Liberal Democrats she was suspended by this party too after her fiancé’s account social media account tweeted: ‘I fantasise about children having sex, sometimes with adults, sometimes with other children, sometimes kidnapped and forced into bad situations.’

Follow-up tweets in the same thread on Nathaniel Knight’s account clarified that these were not things he wanted to do ‘in real life’. Ms Challenor claimed at the time that his account had been hacked, and said both she and her partner condemned the messages expressed.

After being suspended by the Greens she said she was horrified and saddened by her father’s crimes, but had only become aware of the full extent of them just before he was convicted and sentenced to 22 years in jail.

The issue became the subject of public debate when a moderator posted a news article from the Spectator in a popular subforum covering UK politics which named her in passing – and was then banned by the site (after criticism of the decision, the user was reinstated).

Concerned by the ban, moderators set r/ukpolitics to private last night to protect users while they worked out why the action had been taken.

They said in a post explaining: ‘It later became apparent that Reddit has hired this individual as an Reddit admin, and were banning people from discussing her past to protect their employee from harassment.’

They asked people not to name her at all, ask any questions about why, to discuss the issue or risk being banned.

‘We are obviously extremely concerned by these developments, but cannot express our full dissatisfaction with Reddit on the platform at this time,’ they said.

Reddit admins issued a statement yesterday saying: ‘Earlier this month, a Reddit employee was the target of harassment and doxxing (sharing of personal or confidential information).

‘Reddit activated standard processes to protect the employee from such harassment, including initiating an automated moderation rule to prevent personal information from being shared.

‘The moderation rule was too broad, and this week it incorrectly suspended a moderator who posted content that included personal information.

‘After investigating the situation, we reinstated the moderator the same day.

‘Content that mentions an employee does not violate our rules and is not subject to removal a priori. However, posts or comments that break Rule 1 or Rule 3 or link to content that does will be removed.

‘We are continuing to review all the details of the situation.’

One of the most popular forums on the internet, Reddit has sought to clean up its image in recent years, after previously allowing a number of notorious subforums to exist alongside mainstream content, such as those promoting white supremacy and one which allowed users to share ‘jailbait’ photos of children, as long as there was no nudity involved.

In 2011, the subforum r/jailbait was shut down after CNN reporter Anderson Cooper called it out amid concerns people may be finding contacts to spread images of child abuse.

With regard to the issue over alleged censorship, some are concerned that the Reddit statement said the moderator of r/ukpolitics had been sanctioned for sharing ‘personal information’ – however, news stories about Ms Challenor are in the public domain.

In an updated statement, Reddit admin landoflobsters wrote: ‘Our intent was never to remove any and all mentions of this admin’s name. Just an overzealous automation when attempting to prevent doxxing and harassment.’

Responding to the decision, one user claimed that that: ‘Reddit f**ked up by trying to censor the discussion as much as possible.

‘Now it’s the thing Reddit talks about today. Transparency would have definitely be the best course of action here.’

PrevPreviousIf apps are crashing on your Android phone, here’s how to fix it
NextMen’s penises are shrinking because of pollutionNext