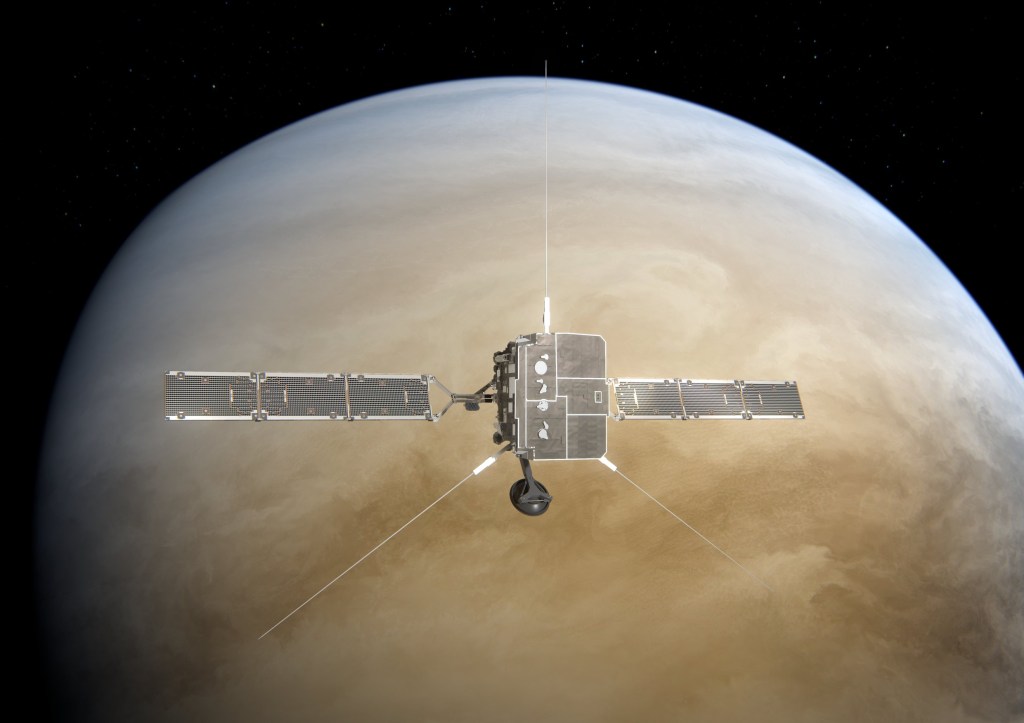 A spacecraft designed and built in the UK is getting ready for the first of many flybys of Venus as it heads for the Sun in a mission to unlock its secrets.

The Solar Orbiter will use the gravitational force of the planet to bring it closer to the Sun while, at the same time, tilting its orbit to observe the star from a different perspective.

The closest approach will take place at 12.39pm UK time on December 27, when the spacecraft will be around 4,700 miles from the cloud tops of Venus.

However, according to the European Space Agency (ESA), the Solar Orbiter will not be able to take any images of Venus as ‘it must remain facing the Sun’.

But it will use some of the onboard instruments to record the magnetic, plasma and particle environment around Venus as it approaches the planet.

At present, the spacecraft is around more than 150 million miles from Earth.

It blasted off into space in February this year from Nasa’s Cape Canaveral site in Florida.

According to the ESA, the Solar Orbiter’s path around the Sun has been chosen to be ‘in resonance’ with Venus.

This means the spacecraft will keep coming close to the planet every few orbits and use Venus’s gravity to alter or tilt its orbit.

The next close approach of Venus is expected to take place in August 2021, and each encounter will increase its orbital inclination.

By 2025, the Solar Orbiter will have enough inclination to take the first ever images of the Sun’s polar regions.

The spacecraft will make a close approach to the Sun every five months, and at its closest will only be 26 million miles away, closer than the planet Mercury.

During these times, it will be positioned for several days over roughly the same region of the Sun’s surface, as the Sun rotates on its axis.

This will allow the spacecraft to observe magnetic activity building up in the atmosphere that can lead to powerful flares and eruptions, providing new insights into the giant storms raging on its surface.

Predicting when these storms occur could help governments and companies protect these satellites and other communications infrastructure.

Back in July, the Solar Orbiter revealed its first images of the Sun, taken from 47 million miles of the star’s surface.

It was the closest images ever taken of the Sun, revealing “campfires”, or mini solar flares, dotted across its surface.

Scientists in the UK helped design four of the 10 instruments on the Solar Orbiter, while the UK Space agency provided £20 million of funding for the £1.3 billion project.

The design and implementation of the spacecraft was undertaken by aerospace company Airbus in Stevenage.

The mission is expected to last a decade.

Once the Solar Orbiter runs out of fuel and power, scientists will lose all communication with the spacecraft.

It will then continue to orbit around the Sun somewhere between Mercury and Venus as a piece of space junk.