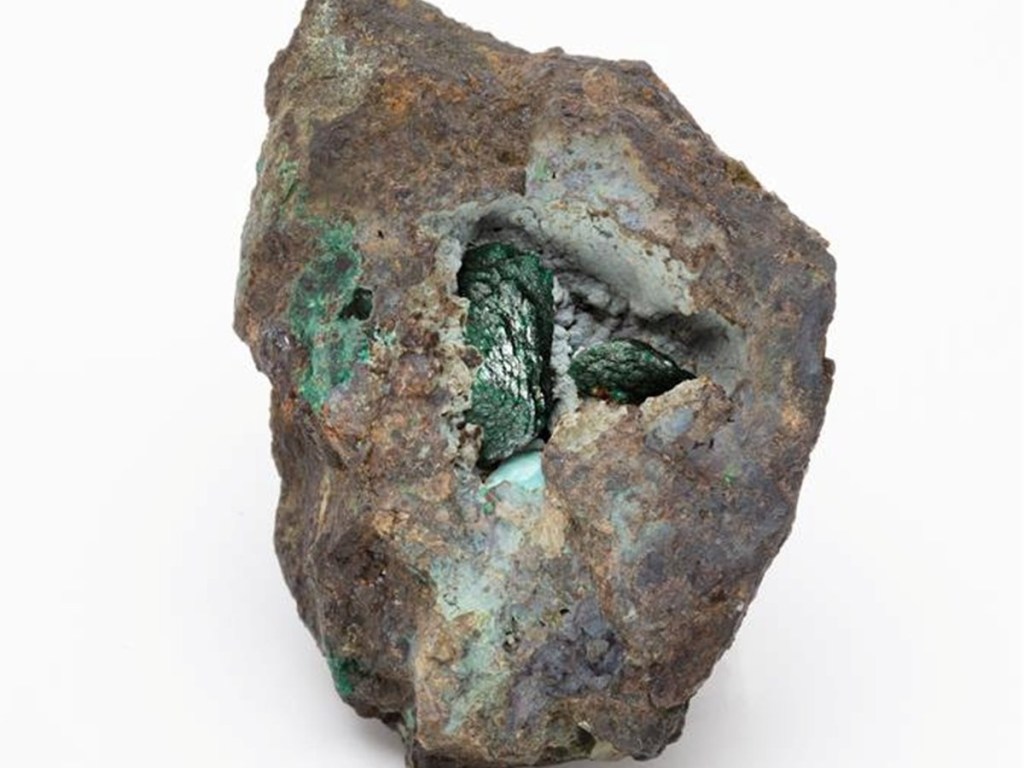 A new species of mineral has been discovered by scientists who analysed a rock mined in Cornwall 220 years ago – and now named after the county.

The mineral was discovered by a team of scientists from the Natural History Museum in London including mineralogist Mike Rumsey.

He was studying a rock taken from the Wheal Gorland mine in St Day, a former mining area near Redruth.

The new mineral, which is dark green in colour, has been named kernowite after the south west county, after the word Kernow – the Cornish word for Cornwall.

Mike, principal curator of minerals at the museum, said: ‘I was investigating a mineral called liroconite so we could curate it properly, but also because it’s my favourite mineral.

‘Liroconite is this beautiful, gorgeous bright blue mineral that comes from Cornwall and I was trying to understand why its colour varies from bright teal-blue all the way to a dark emerald green.

‘It turns out that the darkest green samples are sufficiently chemically different to the blue’s that we, as mineralogists, would define it as a new species.’

The new species is currently known from a single location in Cornwall, which has given rise to its new name kernowite, after Kernow which is the Cornish word for Cornwall.

Mike continued: ‘Based on it’s mining history Cornwall is a world UNESCO heritage site known around the world for the discovery for many new minerals.

‘However, a lot of these discoveries happened over 100 years go when the mines were still active, so the discovery of a new mineral from Cornwall, particularly one that related to the regions most famous mineral, is really quite amazing.’

The mine from which kernowite has been found is also the location from which the majority of the world’s liroconite is derived, which is highly prized among collectors.

‘The mine was used between around 1790 and 1909, but it has been demolished now. There is a housing estate on it and there is nothing left. It’s an extinct locality, we can never go back’

Because liroconite is such a famous mineral, there could be samples of kernowite in other museums that have for all this time also been grouped with the liroconite.

But with the demolition of the mine, it means that more samples of the mineral may never be found again.

Mike added: ‘What we’ve got is a bit like a little time capsule.

‘The fact that this sample was preserved in a museum means that we can do this kind of research because we’d never be able to go back and collect any more.’

Mike discovered kernowite with colleagues at the NHM and collaborators from Slovakia and the Diamond Lightsource in Harwell, Oxford.

The new description has now been approved by the governing body and the new species kernowite will be published in Mineralogical Magazine in the new year.

The museum explained how new minerals are described as a new species, same as plants of animals, after the system developed by Carl Linnaeus in the eighteenth century.

Mike continued: ‘Like other branches of natural sciences, minerals and rocks were organised by early scientists in a way that allowed people to recognise connections and links between them.

‘The term species in the life sciences really gained traction thanks to the work of Linnaeus.

‘He also included the mineral kingdom in his classifications, so minerals ended up with some of the same language for their descriptions.

‘Other terms like genus have not made it through though, as minerals don’t really have a strongly hierarchical structure in their organisation, although that’s something being discussed by scientists currently.’

To be described as a new species, a new mineral needs to meet a number of criteria, relating to chemistry, atoms, and arrangement of components – what mineralogists call crystal structure.

There are around 100 new species of mineral discovered each year, but not many have large colourful crystals.

Mike added: ‘In the crystal structure of liroconite, one of the positions where you can put an atom can contain either aluminium or iron.

‘For liroconite, the position is dominantly filled with aluminium and the physical crystal ends up being blue.

‘For the new mineral kernowite the position is instead dominantly filled with iron and the result is a green crystal.

‘We think that the more iron the darker the green, but that still needs some more work and more samples to confirm.

‘Both minerals have exactly the same crystal structure meaning that all the atoms are in the same positions, it is just the chemical composition that varies.’

PrevPreviousWhere is Santa right now? How to track Santa Claus this Christmas
NextBritish-built spacecraft set for festive flyby of VenusNext