Google Nest Audio review: Have a word with my assistant 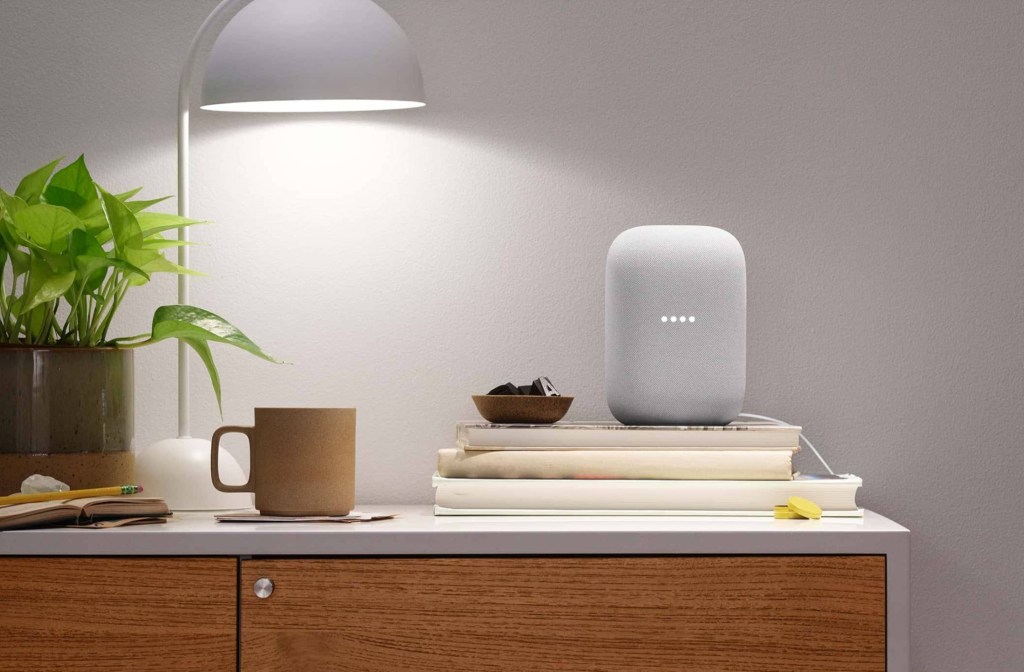 The Google Nest Audio is a direct follow-on from the original Google Home smart speaker that was released back in 2017.

It’s set to be the all-rounder in Google’s speaker catalogue. It’s not as big or expensive as the Google Home Max nor as cheap and small as the Google Nest Mini. And, as such, it arrives with a fairly middle-of-the-road price at £89.99.

In essence, the Nest Audio is the perfect smart speaker for those who haven’t fully subscribed to Amazon’s rival Echo platform.

The new look for Nest Audio includes an all-over fabric coating (made from 70% recycled materials) that comes in a choice of ‘Chalk’ or ‘Charcoal’ which translates to white or black. The bank of four white LEDs has been retained to show when the Google Assistant is operating and there’s still a physical switch on the back to mute the mic. The speaker itself is about seven inches tall so it stands up at around the same size as a large smartphone.

As well as connecting over WiFi, the Nest Audio also supports Bluetooth so you can use that as a backup if you want to play music directly from your phone.

The main bulk of your interactions with the speaker though will likely come through talking to the Google Assistant. You wake it up with either a ‘Hey Google’ or ‘Ok Google’ and you’re then able to play music from a service like Spotify or YouTube Music, set timers, find out the weather or just generally search Google for the answer to a question.

Google knows the Nest Audio is mostly going to be used for listening to music (and perhaps podcasts) so it’s made some serious effort on the audio front. Underneath the fabric coating are two drivers: a 75mm woofer and a 19mm tweeter. It’s a big improvement on the single 50mm full-range driver inside the original Google Home.

The result, to my ear at least, is pretty good for a £90 speaker. The sound is richer and fuller than from the original Google Home and the volume is more than capable of filling up a mid-sized room with sound.

Nest Audio uses Google’s Media EQ and Ambient IQ technology to adjust the sound. The former will alter the audio based on what you’re playing and the second will alter it based on where you’re playing it. So Metallica being played from the speaker against a wall will sound very different to an episode of Serial being played from the middle of the room. Those with military-grade hearing ability may be able to discern the differences but I wasn’t able to get down to that level of finesse with my own lugholes.

What I appreciated was that the speaker was easy to use through Google’s Home app and that there wasn’t much distortion of the sound even when I started to push the volume up.

If you’ve already got a Google Home then you can pair it with the Nest Audio for a stereo set up. This also works (and works better) with two Nest Audio speakers and I wouldn’t be surprised if we start seeing twin pack bundles launching soon at a slight discount.

Is the Nest Audio a worthwhile purchase? Absolutely. The price and performance are both on point and the new design is a winner in my book. There will inevitably be some issues for some people around the voice control (perhaps it doesn’t always work or there’s connection trouble or it mis-hears you) but these get less and less with each iteration.

The caveat is, of course, that you may already have tied your flag to the mast of another platform. Perhaps you’re an Alexa household, or you’re deep into Sonos or Apple’s HomePod. If so, fine – you don’t need to worry about the Nest Audio. But for those of us wanting the best all-round Google Assistant smart speaker, this is it.