Alan Turing £50 note revealed, 70 years after he was convicted for being gay 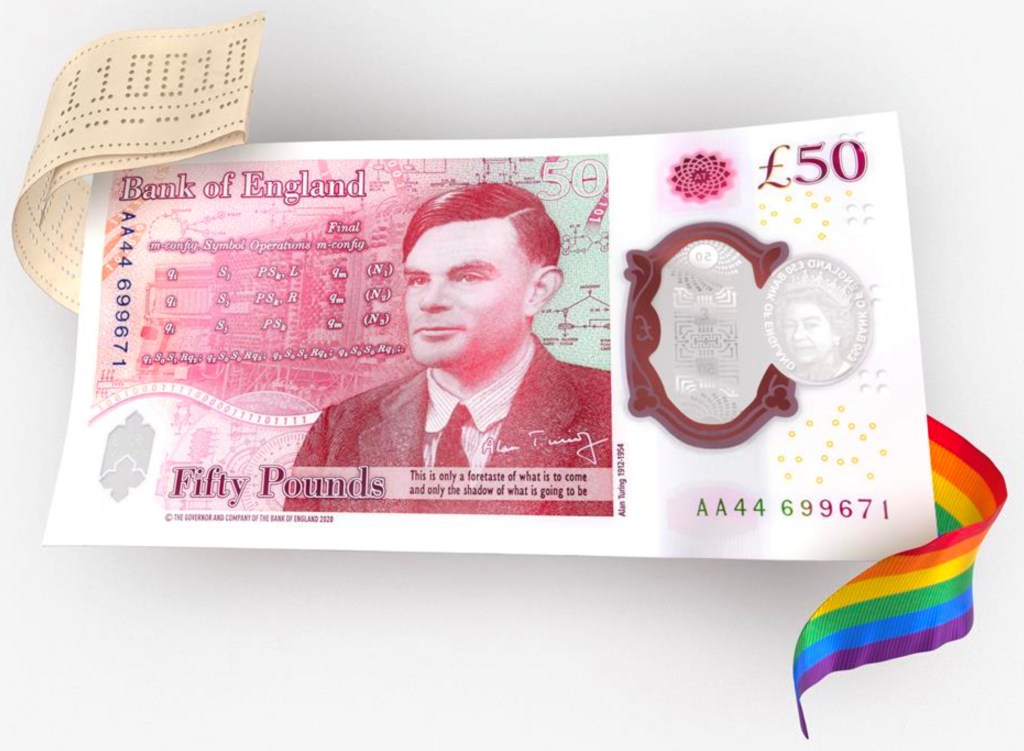 The Bank of England has revealed the design of its new £50 pound note, featuring computer scientist and codebreaker Alan Turing.

In 1952, the British government convicted Alan Turing for his homosexuality, under laws against ‘gross indecency’.

After a posthumous royal pardon in 2013, the government announced a mea culpa in the form of a £50 note featuring Turing’s face, which will enter circulation on 23 June, his birthday.

The new £50 note will be the last of the Bank of England’s notes to switch from paper to plastic, though the old £50 notes will be accepted in shops for the time being.

Apt for a world-renowned codebreaker, the note will be the most ‘secure’ of all bank notes, and include a series of puzzles known as the ‘Turing Challenge’, which GCHQ codebreakers designed especially.

The puzzles, which increase in complexity and lead to a single answer, should be solvable in around seven hours for experienced codebreakers.

While even the clues are currently shrouded in secrecy, they are apparently based on certain unique parts of the banknote, such as technical sketches of Turing’s World War Two code breaking machine.

Instead of the steam engine symbols in honour of pioneer engineers James Watt and Matthew Boulton that appear on the current note, the new note will feature drawings and words to honour Turing’s code breaking prowess.

The note will feature a prominent photo of Turing, taken by Elliott and Fry in 1951, part of the National Gallery’s collection, as well as a maths formulae from Turing’s seminal 1936 paper ‘On computable numbers, with an application to the Entscheidungsproblem’.

It will also include drawings of Turing’s Automatic Computing Engine (ACE) Pilot machine, an early form of computer, and of the British Bombe, a machine invented by Turing to break the German Engima machine.

As well as his signature and ticker tape depicting Turing’s birthday in binary code, the note will feature a quote from Turing that he gave to The Times in 1949, saying ‘This is only a foretaste of what is to come, and only the shadow of what is going to be’.

In addition to these symbolic gestures, the note will also contain a number of security features, like holograms, see-through windows of Bletchley Park and foil patches.

‘This new £50 note completes our set of polymer banknotes,’ said Sarah John, the Bank’s chief cashier whose signature features on the note

‘These are much harder to counterfeit, and with its security features the new £50 is part of our most secure series of banknotes yet.’

Ironically, despite his codebreaker pedigree, Turing claimed he was not particularly good at solving puzzles.

Yet Turing’s main claim to fame was to solve one of the world’s most infamous puzzles – the German Engima code.

His work was a key factor in shortening the war and saving countless lives. After the war, Turing also played a pivotal role in developing the technology for early computers.

But despite his success, the British government convicted Turing for having an affair with a man in Manchester. As an alternative to prison, the government forced him to take female hormones for the rest of his life. He died by suicide at the age of 41.

‘He was a leading mathematician, developmental biologist, and a pioneer in the field of computer science, said Andrew Bailey, the governor of the Bank of England.

‘He was also gay, and was treated appallingly as a result. By placing him on our new polymer £50 banknote, we are celebrating his achievements, and the values he symbolises.’

‘Turing was embraced for his brilliance and persecuted for being gay,’ said current GCHQ Director Fleming.

‘His legacy is a reminder of the value of embracing all aspects of diversity, but also the work we still need to do to become truly inclusive.’

In a nod to Turing, the Bank of England is flying an LGBTQ rainbow flag above its headquarters on Threadneedle Street in London.

However, campaigners for equality point out that of the four bank notes in circulation, three are men and all are white – with Winston Churchill on the £5 note, JMW Turner on the £20 note and Jane Austen on the £10 note.

It’s unlikely you’ll see one of the notes in person – just 11% of the total bank notes in circulation are £50 notes, while general cash use has declined during the pandemic.

The government has discussed abolishing the note altogether in recent years, as the note is often used for criminal activity.

MORE : The secret codes LGBT people used to meet up during WWI

PrevPreviousReddit protests: Who is former admin Aimee Challenor?
Next‘Skybrator’ bladeless wind turbines could save 500,000 birds from certain death each yearNext