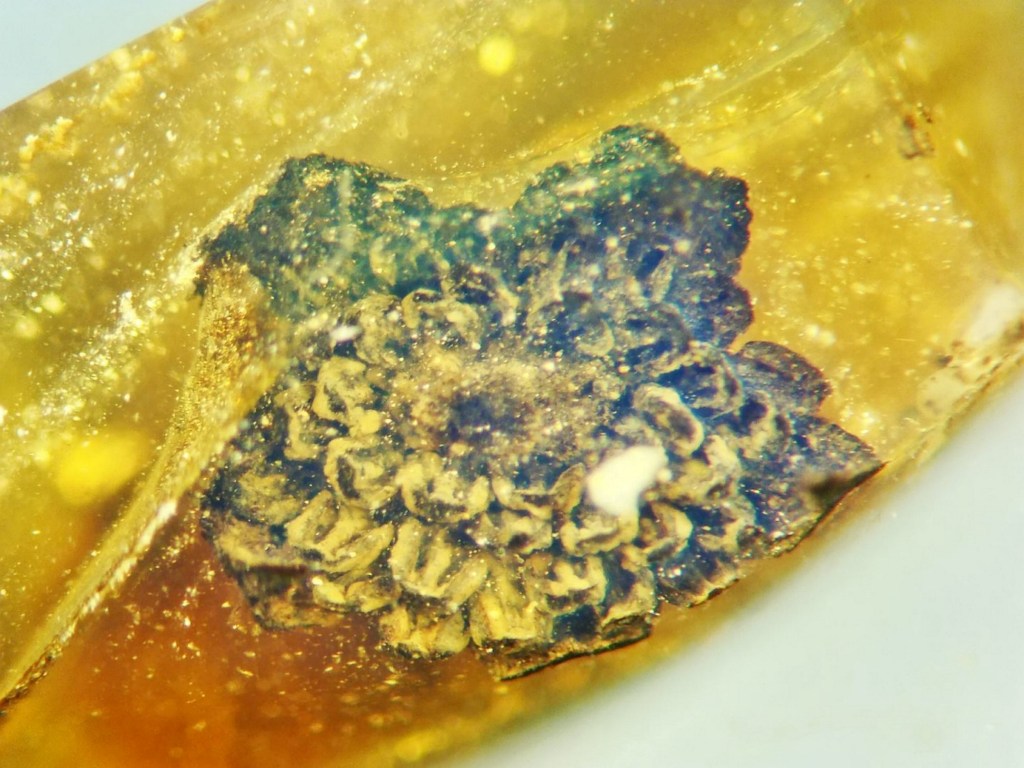 A spectacular flower that bloomed when dinosaurs ruled the Earth has been unveiled – frozen in time.

The new plant preserved in amber is captured in exquisite detail – with its petals reaching for the heavens ‘like a sunburst’.

Resembling a cross between a Scottish thistle and an opium pod, it has been hailed a ‘holiday beauty for 2020’. Even the pollen remains.

Named Valviloculus pleristaminis, it became entombed in the sticky sap of a tropical tree that hardened into a transparent shell. Known as Burmese amber, it is a scientist’s dream – opening a window into prehistoric lost worlds.

The biggest land animals that ever lived still had 35 million years to go as planetary overlords when Valviloculus grew. They are known to have eaten flowers.

Lead author Professor George Poinar Jr., of Oregon State University, said: ‘This isn’t quite a Christmas flower but it is a beauty – especially considering it was part of a forest that existed 100 million years ago.’

Amber excels at preserving the finer points of plants and animals. On contact, resin seeps into tissues, protecting against fungus and rot while also drying them out.

Asia is rich in dinosaur fossils – with specimens including Velociraptor and neck-frilled Dilophosaurus of Jurassic Park fame.

Prolf Poinar is an international expert in using plant and animal life forms preserved in amber to learn more about the biology and ecology of the distant past.

He said: ‘The male flower is tiny, about two millimeters across, but it has some 50 stamens arranged like a spiral, with anthers pointing toward the sky.’

A stamen consists of an anther – the pollen-producing head – and a filament, the stalk that connects the anther to the flower.

Prof Poinar said: ‘Despite being so small, the detail still remaining is amazing.

‘Our specimen was probably part of a cluster on the plant that contained many similar flowers, some possibly female.’

Valviloculus has an egg-shaped, hollow floral cup – the part of the flower from which the stamens emanate.

It also has an outer layer consisting of six petal-like components known as tepals and two-chamber anthers – with pollen sacs that split open via laterally hinged valves.

The flower emerged during the Cretaceous period in the remnants of the southern super-continent Gondwana that calved into South America, Africa, Antarctica, India, and Australia.

The land on which the individual specimen grew is now part of Myanmar in southeast Asia.

It became encased in amber and rafted on a continental plate some 4,000 miles across the ocean from Australia to Southeast Asia, explained Prof Poinar.

Geologists have been debating just when this chunk of land – known as the West Burma Block – broke away from Gondwana.

Numerous flowering plants – or angiosperms – have been discovered in Burmese amber, the majority of which have been described by Prof Poinar and Oregon State co-author Prof Kenton Chambers.

Angiosperms only evolved and diversified about 100 million years ago. So the West Burma Block could not have broken off before then, said Prof Poinar.

This is much later than dates that have been suggested by geologists. Valviloculus is decribed in the Journal of the Botanical Research Institute of Texas.

PrevPreviousGalactic radio signal investigated for alien origin
NextCan you get Zoom on a smart TV? How to put calls on your telly as Christmas limit liftedNext