Can you get Zoom on a smart TV? How to put calls on your telly as Christmas limit lifted 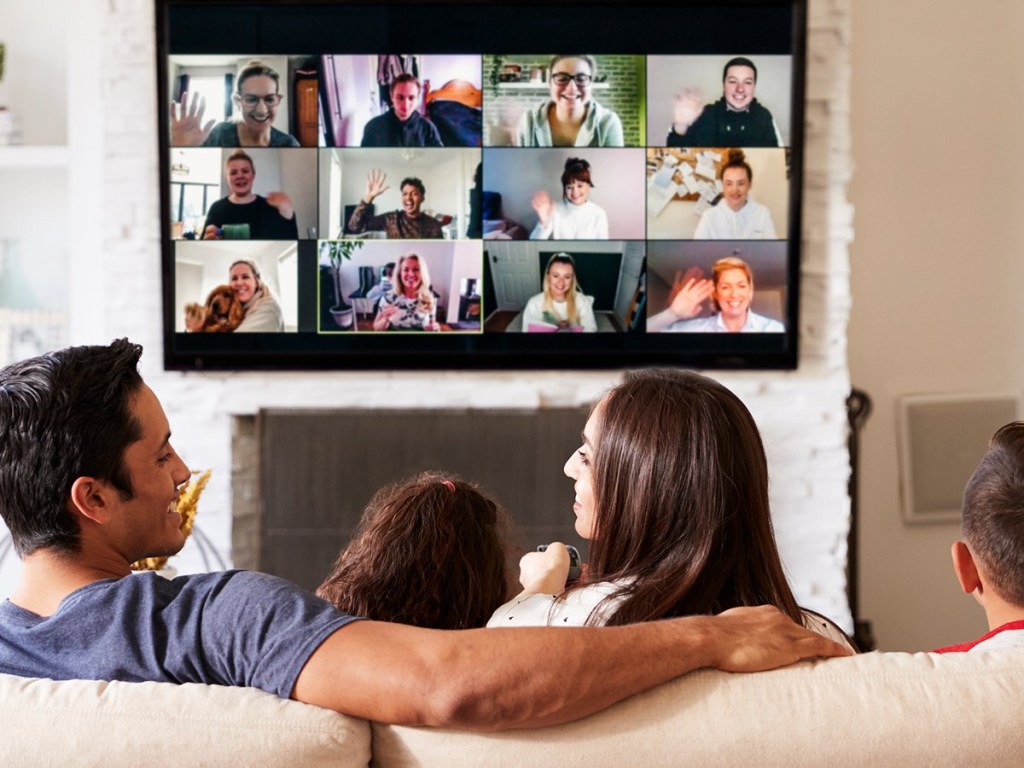 Zoom has announced it will be lifting the 40-minute call limit for free account holders on Christmas Day.

Considering millions of people will be missing their families, meeting up over Zoom is the next best thing.

However, not everyone will be thrilled with the idea of huddling round a crowded 13-inch laptop screen for Christmas.

Sadly, Zoom doesn’t have a smart TV app that you can just install. But there are a few different ways of getting Zoom onto your TV, which should make it easier to see and hear your friends and family over Christmas.

Of course, it depends on things like which phone system (iOS or Android) you use and whether or not your TV is a ‘smart TV’ or necessarily has the right ports.

Likewise, you can also opt for either a wired or wireless connection. The former is better as it allows for a more stable connection, but it does mean you’ll need the required ports on both your TV and your laptop.

How to get Zoom on your TV with an HDMI cable

The simplest and easiest way to get Zoom onto your TV is just to plug your laptop into your TV using the HDMI port.

Most TVs (whether smart or not) will have an HDMI port – although many modern laptops don’t. If so, you may need a USB-C-to-HDMI dongle that can make the connection for you.

When the two devices are plugged in, you’ll see and hear your Zoom call on the TV screen. However, there are a couple of drawbacks. Firstly, your TV doesn’t have a camera or a microphone so you’ll still be relying on the laptop’s webcam and mic to pick you up. Bear this in mind when you position your laptop next to the TV.

Secondly, the laptop will be tethered to the TV so you can’t just get up and walk around with it, the same way you would if you were wirelessly casting to the TV.

If you’re an Apple household then it’s simple enough to get Zoom on your TV using Apple’s AirPlay bridging technology.

You’ll need an AirPlay-enabled smart TV for this (at the moment, that’s limited to TVs from Samsung, Sony, Vision and LG) or an Apple TV set-top box.

To get up and running, pull down on the Action Center from the top-right of your iPhone or iPad and tap on Screen Mirroring.

Tap the name of the Apple TV (or smart TV) that should appear on the list. Then just open Zoom from your device and start the call.

You can also do this with a MacBook and an Apple TV.

If you’re an Android user, you can use a Chromecast to ‘cast’ your phone screen to the TV.

Just as you would with Netflix or Disney+, you need to find the Cast option (which looks like a WiFi signal meeting a box) and tap it to make your phone scan for available devices.

Often, you’ll be able to find the option to Cast by pulling down the quick settings menu from the top of your phone screen. When you tap on your Chromecast (or Nvidia Shield) you should see your phone’s display replicated on the TV. Then just open Zoom as normal and watch it on your TV.

If you don’t have a Chromecast, then you can use an app called ApowerMirror to cast directly from your phone to your TV. You’ll need to download the app on both devices and make sure they’re running on the same WiFi network to form a bridge.