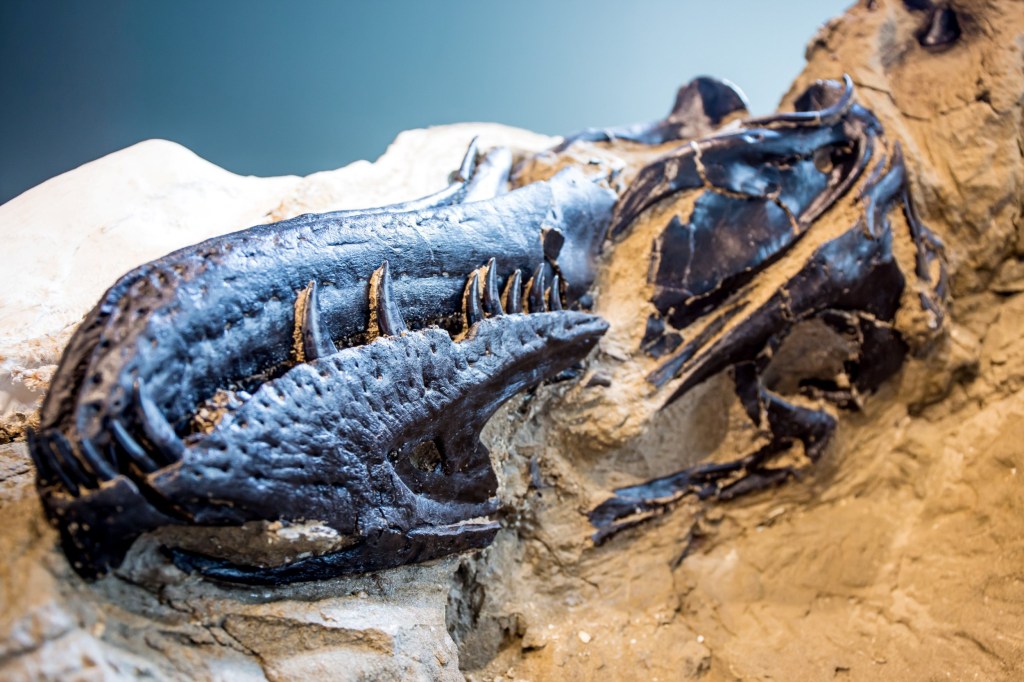 Scientists have revealed the world’s first ever complete T-rex skeleton – found after it fell to its death in a deadly duel with a triceratops.

Each of the 67-million-year-old remains are among the best ever found and have only been seen by a select few people since they were discovered in 2006.

The pair – nicknamed the ‘Dueling Dinosaurs’ – are preserved together in what is thought to be a predator-prey encounter, where both fought to the death.

Entombed in sediment in Montana, they were discovered by professional fossil hunters – a cattle rancher cowboy and two pals.

Incredibly, their body outlines, skin impressions, and injuries – including tyrannosaur teeth stuck in the triceratops body – can still be seen.

It took years to extract the 14-tonne skeletons, and arrange their purchase and sale, so it is reported only a few dozen people have seen them so far.

But this week it was announced they had been bought by the Friends of the North Carolina Museum of Natural Sciences for an undisclosed sum.

The group has donated them to North Carolina Museum of Natural Sciences, which is due to start building their exhibition in 2021.

And they have released incredible photos of the remains to mark the announcement.

It has been described as ‘one of the most important paleontological discoveries of our time’ – and is the only 100% complete T-rex ever found.

Dr Lindsay Zanno, head of palaeontology at the museum, said: ‘We have not yet studied this specimen; it is a scientific frontier.

‘The preservation is phenomenal, and we plan to use every technological innovation available to reveal new information on the biology of the T. rex and Triceratops.

‘This fossil will forever change our view of the world’s two favourite dinosaurs.’

Dr Eric Dorfman, director and CEO of the museum added: ‘The museum is thrilled to have the unique opportunity to house and research one of the most important paleontological discoveries of our time.

‘Not only are we able to uncover unknown details of these animals’ anatomy and behavior, but our new dedicated facility and educational programs will allow us to engage with audiences locally, across North Carolina, and worldwide.’

A rancher, his friend and his cousin found the fossils in 2006, and it is reported they came to a deal with the landowners.

The ‘Dueling Dinosaurs’ themselves went to auction in 2013 at Bonhams in New York, but no bid met the reserve price of $6m.

During years of negotiations, the fossil was reportedly locked away in labs or warehouses.

But thanks to donors, the nonprofit Friends of the North Carolina Museum of Natural Sciences has now bought them on behalf of the museum.

The dinosaur carcasses have not been studied and remain entombed within sediment from the Montana hillside where they were discovered.

Each bone is in its natural position and museum scientists will have access to biological data that is typically lost in the excavation and preparation processes.

Construction is due to begin on the exhibit in Raleigh, North Carolina, in 2021.