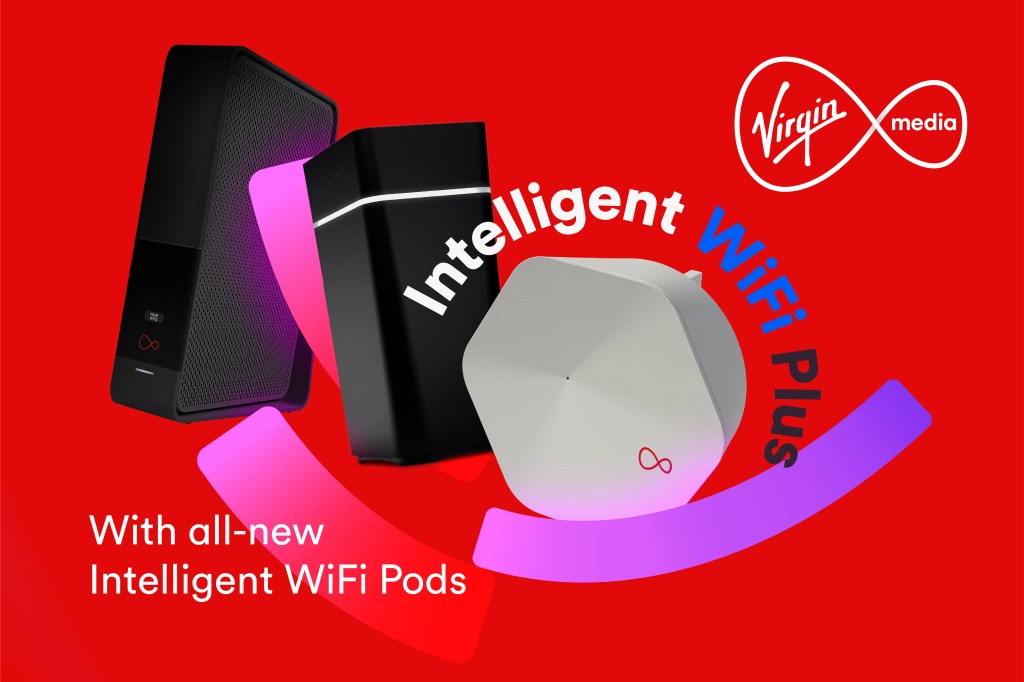 Virgin Media has rolled out a new service for certain customers to take advantage of called Intelligent WiFi Plus.

It consists of a firmeware update to either the Hub 3 or Hub 4 router and new plug-in ‘Pods’ that expand the signal.

Customers need to be on Virgin Media’s Ultimate Oomph or Gig1 plans, otherwise it requires an upgrade to the new service for an extra £5 per month.

Once signed up, you receive the update over the air and the Pod gets sent through the post. It’s a white, pentagon-shaped device that plugs into a wall socket and has an Ethernet port on the bottom in case you want to hardwire a laptop in.

Virgin Media says customers should plug the Pod in somewhere between the router and the blackspot in your home. The network says that Intelligent WiFi Plus can make a home network up to three times faster by establishing a mesh network.

Unlike range extenders, mesh networks rely on nodes that act as WiFi points in their own right and help give you a much more robust signal. Furthermore, because you may have different devices jumping on the signal in different rooms, the mesh network will be able to allocate and distribute the signal accordingly.

I found the Virgin Media Intelligent WiFi Plus setup to be about as simple as any tech I’ve ever encountered. I got the nod from Virgin Media that the firmware had been updated and then it was just a case of plugging the Pod into the wall.

A tiny white LED flashes to let you know the device is setting itself up and then it vanishes when the connection is made. From there, you should see the effects on your home network.

While I didn’t notice any particular gains in speed, the added stability of my network was unmistakable. The Sonos speaker in the corner no longer drops out and I can check my phone on the garden patio – something that never worked when relying on my hub 3 alone.

If you have a particularly large house (I do not) then you can add extra Pods to other plug sockets around your gaff to increase the network.

The Intelligent WiFi Plus is a welcome update from Virgin Media and I’d encourage anyone on the aforementioned plans to give the customer service line a call (0345 454 1111) and get the upgrade. If you suffer from blackspots then it’s a simple way to boost your signal.

Without getting too technical, WiFi is a protocol (a way of governing data packets) known as 802.11. When it comes to speed, look at the letters after the protocol to know what level of speed you’re getting. For example, 802.11n is a standard speed level that gets you around 100Mbps over a WiFi network.

If you jump up a level, you’ll get 802.11ac which promises speeds around 1,300Mbps but in reality gives you about 200Mbps. Finally, there’s now 802.11ax which is also known as WiFi 6 and offers theoretical speeds of 10Gbps and delivers something like 2Gbps.

If you want the most future-proofing for your home network, go for WiFi 6 – but understand that it’ll be pricey. For most of us, an 802.11ac network will do just fine.

If you’re a power user then I don’t feel Virgin’s solution will outperform a more robust (and more expensive) mesh network from the likes of Netgear, Orbi or Google.

However, for the vast amount of Virgin Media customers out there who just want a simple and inexpensive way to get more from their WiFi, this solution will fit the bill nicely.