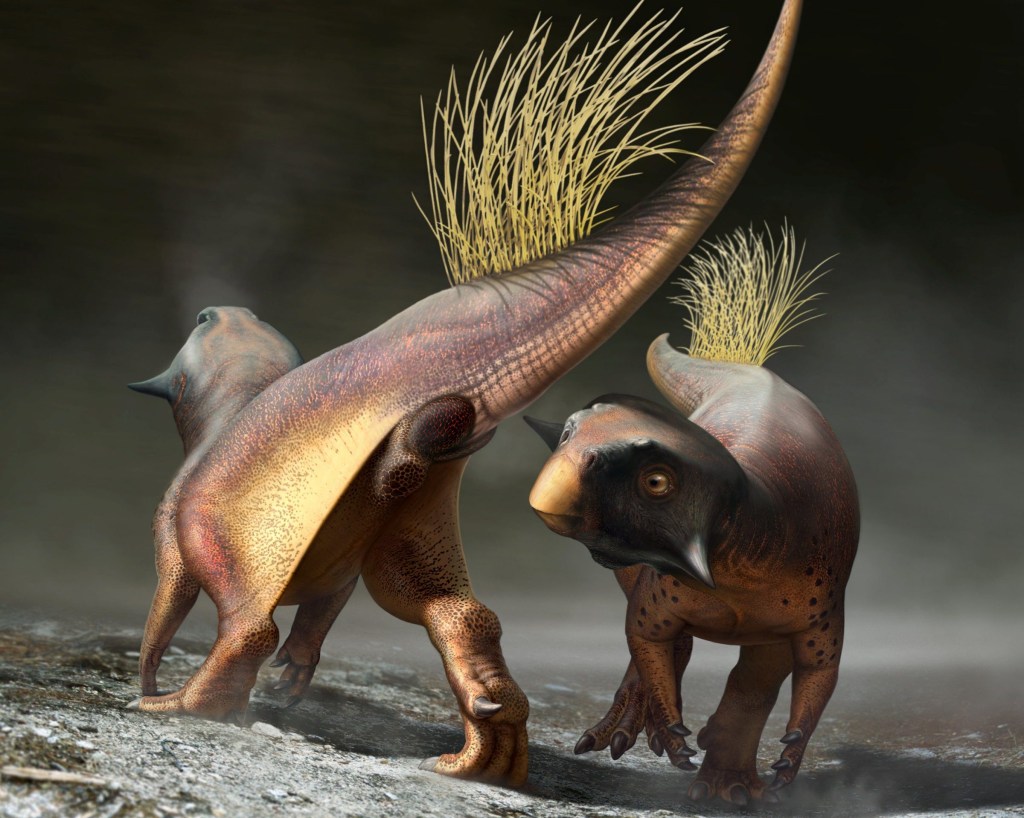 Scientists have discovered how dinosaurs had sex – by reconstructing their genitals for the first time.

The discovery comes from the remains of a primitive relative of legendary Triceraptops.

They were so well preserved even the cloaca – an opening used for mating – was visible.

Resembling a giant turkey, spectacular psittacosaurus had a huge beak, horns on either side of its face and was about six and a half feet long.

The organ in question was rich in the natural pigment melanin – which colours the skin, eyes and hair of animals. This would have provided the ‘vent’ with a function in display and signalling – similar to baboons and salamanders.

It’s believed large lobes on either side harboured musky scent glands – as seen in crocodiles today.

Lead author Dr Jakob Vinther, of the University of Bristol, said: ‘I noticed the cloaca several years ago after we had reconstructed the colour patterns of this dinosaur using a remarkable fossil which clearly preserves its skin and colour patterns.

‘It took a long while before we got around to finish it off because no one has ever cared about comparing the exterior of cloacal openings of living animals, so it was largely unchartered territory.’

The complete skeleton is housed at the Senckenberg Museum of Natural History in Frankfurt. It was dug up at a fossil site in northwestern China called the Jehol Biota.

Birds – the descendants of dinosaurs – have a cloaca. Usually covered by feathers, it is found under the body. Crocodiles – the closest living relatives of the biggest animals to walk the planet – also have one. In males, the penis is hidden inside during the resting state.

It is believed this applied to psittacosaurus – while the females laid eggs through it. Most birds don’t have a penis.

Added co author Dr Diane Kelly, an expert on copulatory systems from the University of Massachusetts Amherst: ‘Indeed, cloacas are pretty nondescript. We found the vent does look different in many different groups of tetrapods, but in most cases it doesn’t tell you much about an animal’s sex.

‘Those distinguishing features are tucked inside the cloaca, and unfortunately, they’re not preserved in this fossil.’

Pronounced ‘klo-A-ca, it comes from a Latin word meaning ‘to cleanse’ as it performs urinary, intestinal and reproductive acts.

When birds mate, they touch their cloacas for a few seconds. This brief ‘cloacal kiss’ is just enough time to transfer semen to the female.

Now Dr Vinther and colleagues have identified the anatomy part in detail in a dinosaur. Less than an inch long (2cms), it is surrounded by dark tissue.

We know dinosaurs came in all shapes and sizes – ranging from colourful feathered varieties to scaly, horned creatures.

But very little is known about their sexual organs because soft tissue is rarely preserved in fossils. The study published in Current Biology found the cloaca was unique in its appearance.

It exhibits features reminiscent to living alligators and crocodiles – the closest living relatives to dinosaurs. It isn’t possible to tell the sex of the particular animal, but the cloaca’s resemblance to those of crocodiles suggests males had a penis.

Birds are one of the few vertebrate groups that occasionally exhibit visual signalling with the cloaca. The elaborate mating ritual can now be extended back to their ancestors from the age of the dinosaurs.

Robert Nicholls said: ‘As a palaeoartist, it has been absolutely amazing to have an opportunity to reconstruct one of the last remaining features we didn’t know anything about in dinosaurs.

‘Knowing that at least some dinosaurs were signalling to each other gives palaeoartists exciting freedom to speculate on a whole variety of now plausible interactions during dinosaur courtship. It is a game changer.’

Psittacosaurus was early ceratopsian related to Triceratops and other horned dinosaurs. It has been on public display in Germany for over a decade.

Birds and reptiles have a cloaca – a single orifice used for excretion, urination, mating and laying eggs. It had been suspected dinosaurs also had it. The cloaca of the psittacosaurus now confirms it.

It was not possible to establish the individual’s gender as none of the internal anatomy had survived.

Sex between dinosaurs has puzzled scientists for decades. It would have been very difficult for large species to mate without very long penises.

The cloaca means a male’s genitals would not be visible as he walked along – and seen as just a slit beneath the tail.

A few male birds, such as the waterfowl, have a penis and, interestingly, their lineages all originate near the base of the family tree.

If ancient birds had penises that were lost later in evolution, dinosaurs almost certainly did too.

Very long, flexible penises could explain how huge or spiky dinosaurs got close and personal – without one of them being killed.