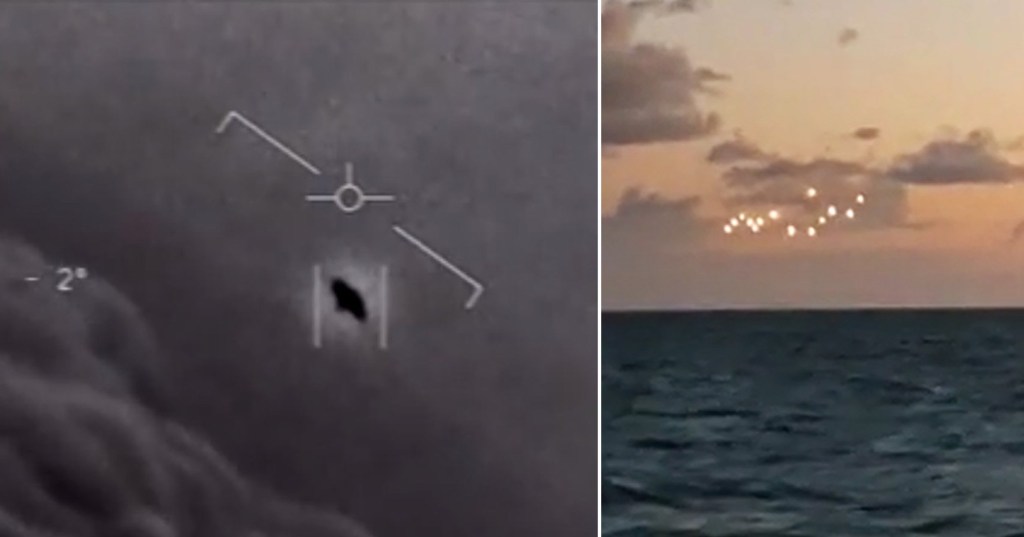 The hunt for proof of alien visitors on Earth has been bolstered by claims the US has evidence of advanced extra-terrestrial technology.

The former Director of National Intelligence under Donald Trump has claimed known alien craft can break the sound barrier without a sonic boom and perform maneuvers impossible with human technology.

John Ratcliffe said that many of the incidents US officials have witnessed have no easy explanation.

His comments have generated even more excitement for a forthcoming report on what the White House knows about UFOs.

‘There are a lot more sightings than have been made public,’ Ratcliffe told Fox News.

‘Some of those have been declassified.’

‘And when we talk about sightings, we are talking about objects that have seen by Navy or Air Force pilots, or have been picked up by satellite imagery that frankly engage in actions that are difficult to explain.

‘Movements that are hard to replicate that we don’t have the technology for. Or traveling at speeds that exceed the sound barrier without a sonic boom.’

Ratcliffe told host Maria Bartiromo that the sightings of ‘unidentified aerial phenomena’ had been observed all around the world.

‘When we talk about sightings, the other thing I will tell you is, it’s not just a pilot or just a satellite, or some intelligence collection,’ Ratcliffe said.

‘Usually we have multiple sensors that are picking up these things, and some of these are unexplained phenomenon, and there is actually quite a few more than have been made public.’

Last December, the US government was given a 180-day deadline to disclose what it knew about unidentified flying objects.

Former president Trump signed a $2.3 trillion Covid-19 relief bill that included an act stating government agencies must publish a report in the next six months.

The report, which is being eagerly awaited by alien hunters on the internet, should be out before June 1.

Ratcliffe said he had hoped to publish their findings before he left office on January 20.

‘We weren’t able to get it down into an unclassified format quickly enough,’ he said.

In January, a ‘treasure trove’ of UFO-related documents from the CIA was published online.

The campaign to make the documents public dates back to the 1980s and was spearheaded by John Greenwald Jr. He now operates the website – known as ‘Black Vault’ – where the contents of the dossiers can be downloaded.

Many of the UAPs in the files may be tricks of the light or a misjudgment by a pilot. But some of them became targets investigated by the Pentagon.

‘Around 20 years ago, I had fought for years to get additional UFO records released from the CIA,’ Greenewald told Motherboard.

‘It was like pulling teeth! I went around and around with them to try and do so, finally achieving it. I received a large box, of a couple thousand pages, and I had to scan them in one page at a time.’

According to Greenwald, the documents are the result of 10,000 Freedom of Information reports. And the government agency made it as difficult as possible for anyone else to get eyes on their findings.

‘The CIA has made it INCREDIBLY difficult to use their records in a reasonable manner,’ Greenwald told the site. ‘They offer a format that is very outdated (multi page .tif) and offer text file outputs, largely unusable, that I think they intend to have people use as a “search” tool.  In my opinion, this outdated format makes it very difficult for people to see the documents, and use them, for any research purpose.’

Greenwald said there have been thousands of downloads of the files within the first 24 hours of them being made available.

And some of the scenarios described within the documents could have come straight out of The X-Files.

In one case, a small Russian town suffered an explosion ripping the roofs from buildings, blowing apart windows and leaving a 90-foot wide crater. Residents reported seeing a ‘moving fiery sphere’ but the local military concluded it was just an ammonium nitrate blast.

Another story deals with a Bosnian fugitive who claimed to have come into contact with aliens.

Yet another file deals with a CIA Assistant Deputy Director for Science and Technology who ‘exhibited interest’ in a redacted object ‘which was handcarried to his office’.

MORE : CIA declassifies treasure trove of UFO documents for anyone to download