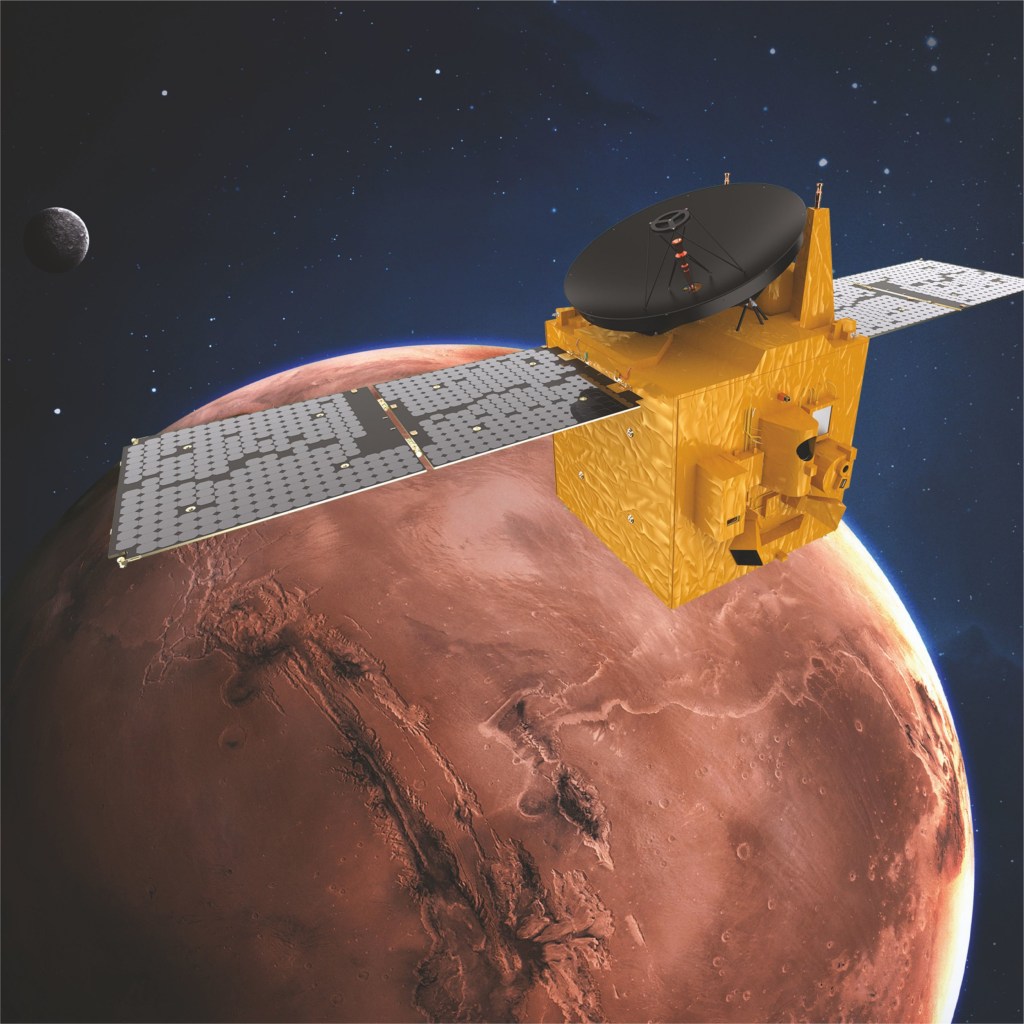 When the spacecraft arrives, it will make the UAE only the fifth country in history to reach Mars.

The probe will explore the atmosphere of the planet, something that has not been done by any previous Mars mission.

And the Martian exosphere (upper atmosphere) behaves at different times during the day, and at different distances relative to Mars.

The instruments will collect different data points on the atmosphere to also gauge seasonal and daily changes.

Achieving MOI is a complex manoeuvre, the spacecraft is rotated to position it for a deceleration burn of 27 minutes, and slowed down from its cruising speed of 121,000 km/h to something nearer to 18,000 km/h.

The stresses on the spacecraft of all engines firing at once are far beyond those at launch and it will be completed with a 22-minute two-way radio delay from Earth, requiring the prob to be highly autonomous.

Around 10 minutes after the MOI burn, the Hope probe flies into the dark side of Mars.

After the gravity of Mars captures Hope, it will enter a phase, called the capture orbit.

The capture orbit takes the spacecraft from a distance of 1,000 to 49,380 km from Mars’ planetary surface.

In this phase instrumentation will be tested and the spacecraft will, over the coming two months, transition to its science orbit.

The transition to Hope’s science orbit will be completed by April 2021.

While it will be in daily contact with Earth during the capture orbit phase, in its science orbit, contacts will take place two to three times a week with each pass being some six to eight hours in order to download data and upload updates and instructions.

Sarah bint Yousef Al Amiri, minister of state for advanced technologies, chairwoman of the UAE Space Agency, said she hopes the mission will be in a position to share data by September.

She told the PA news agency: ‘One of our primary objectives is to ensure that we share the data as soon as we are comfortable, as a science team, that the data is usable by scientists and the data is correct.

She added: ‘A lot of what we’re hoping to discover from the data of this mission is new, and this is a highly complimentary mission to other missions so we truly hope that others’ missions around Mars will utilise also our data in conjunction with their data.

‘And there’s actually talks with a few teams, who have spacecrafts around Mars, to see how we can further collaborate and expand all of our science so analysis capabilities utilising more and more data.’

The Hope mission was one of three that launched to Mars from Earth in July, including Nasa’s Perseverance rover and China’s Tianwen-1 mission.

Tianwen-1, which is expected to enter the red planet’s orbit on Wednesday, will orbit the planet and land on it, and Perseverance will land on Mars.

He said: ‘The lesson here mainly is how space diplomacy, science diplomacy and international cooperation could play a very big role in expediting a lot of the exploration missions and reducing the burden on governments and nations when it comes to such missions.

‘And at the same time accelerates a learning process, and by collaborating, with everyone and being transparent and open about such collaborations.