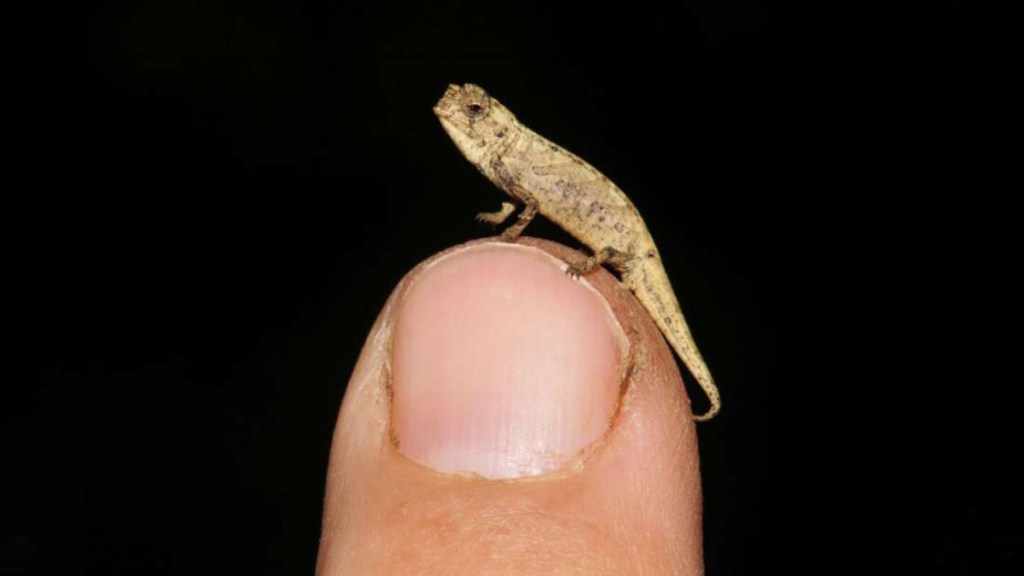 The world’s smallest chameleon has been discovered by scientists, with a rather surprising attribute.

Brookesia nana, or B. nana for short, is about the size of a human thumbnail – but their genitals, when flexed, account for around 18.5% of their body size.

Ordinarily their genitals, called hemipenes, remain sheathed and invisible, but when the slender shapeshifter gets ready to mate, their anatomy balloons in size.

Despite this eye-catching tactic, B. nana is excellent at hiding thanks to its clever camouflage.

Its camouflage is so good, in fact, that it eluded researchers until now – its discovery has only just been announced in journal Scientific Reports.

‘It takes a lot of patience and an eye for it,’ co-author Mark D Scherz told IFLScience.

‘With practice, one can get relatively good at it, but we often work with local guides who are particular experts in finding these tiny chameleons as well.’

But they went one better and found Brookesia nana, from the Greek nano- prefix for the very smallest objects.

What it lacks in size, it makes up for with its ‘surprisingly large’ genitals.

Researchers don’t know why the chameleons have such large genitals, but they think it’s something to do with the female chameleons’ much larger body size.

To reproduce successfully, the male genitals have to properly function the female genitals, meaning bigger is more beneficial to the survival and genetic continuation of these animals.

While B. nana’s hemipenes are some of the longest of small chameleons, it’s not quite the longest.

Brookesia tuberculata, which is just about 20 millimetres in total, has the largest hemipenes, making up to 30 percent of the male body size.

The tiny chameleon was discovered in Madagascar, a common site for discovering new species.

‘We are constantly identifying new species from Madagascar and describing them,’ Scherz said.

‘Even among the beautiful and charismatic chameleons, there is a huge amount that we still have to learn.

‘Meanwhile, we are also working to understand the evolutionary processes that have given rise to Madagascar’s incredible diversity, and the threats that diversity is facing.’