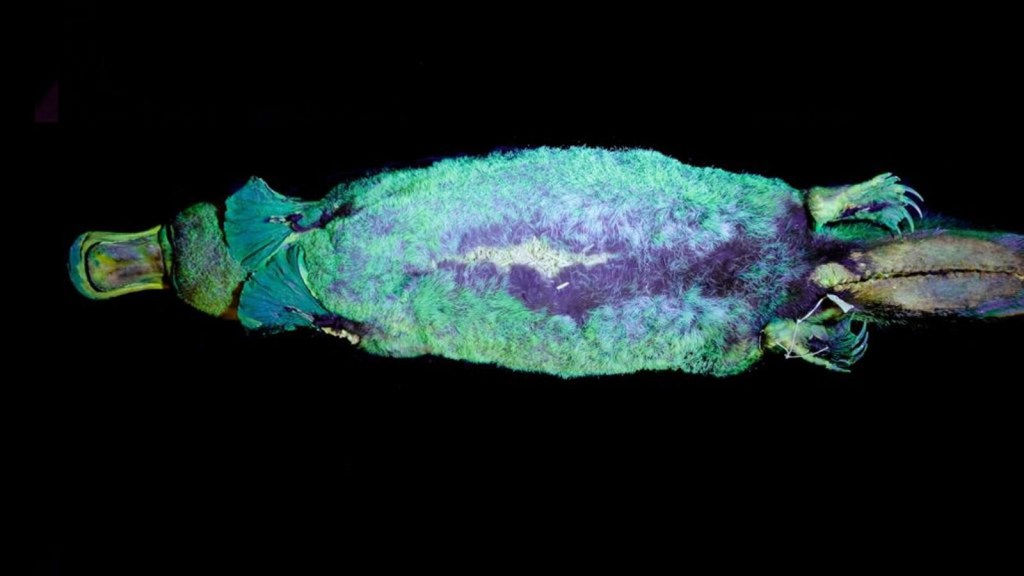 If the natural world was a library, the platypus would have a section all to itself.

The egg-laying, venomous mammal with a beaver’s tail and a duck’s bill that uses electrolocation to hunt prey is now also apparently bioflourescent.

It means the fur absorbs light and then emits it at a different wavelength, something incredibly rare to find in mammals. It’s only previously been documented in flying squirrels and opossums.

The platypus is part of a group of mammals called monotremes which lay eggs, but then nurse their infants with milk.

‘Living monotremes represent an ancient mammalian lineage with a long independent evolutionary history,’ explained the researchers from US-based Northland College, who wrote the study on the platypus’ luminosity which has been published in the journal Mammalia.

‘Platypuses are semi-aquatic monotremes that inhabit streams, lakes, and lagoons across eastern Australia, ranging from Queensland to Victoria and Tasmania.

‘Platypuses are typically nocturnal–crepuscular and use a suite of unique phenotypic traits to exploit low-light aquatic environments at dawn, dusk, overnight, and in murky water.

‘Swimming with their eyes closed, they rely on mechanoreception and electroreception to locate prey underwater.’

The researchers went on to suggest the platypus may have developed the ability to glow as a way of adapting to low-light conditions and being able to see each other in the dark.

‘It was a mix of serendipity and curiosity that led us to shine a UV light on the platypuses at the Field Museum,’ said lead author Professor Paula Spaeth Anich, of Northland College.

‘But we were also interested in seeing how deep in the mammalian tree the trait of biofluorescent fur went.

‘It’s thought that monotremes branched off the marsupial-placental lineage more than 150 million years ago. So, it was intriguing to see that animals that were such distant relatives also had biofluorescent fur,’ Professor Anich added.

The team conducted their study on platypus remains in a museum. They are now aiming to partner up with scientists in Australia to go out and find platypuses in the wild to see if they also glow.