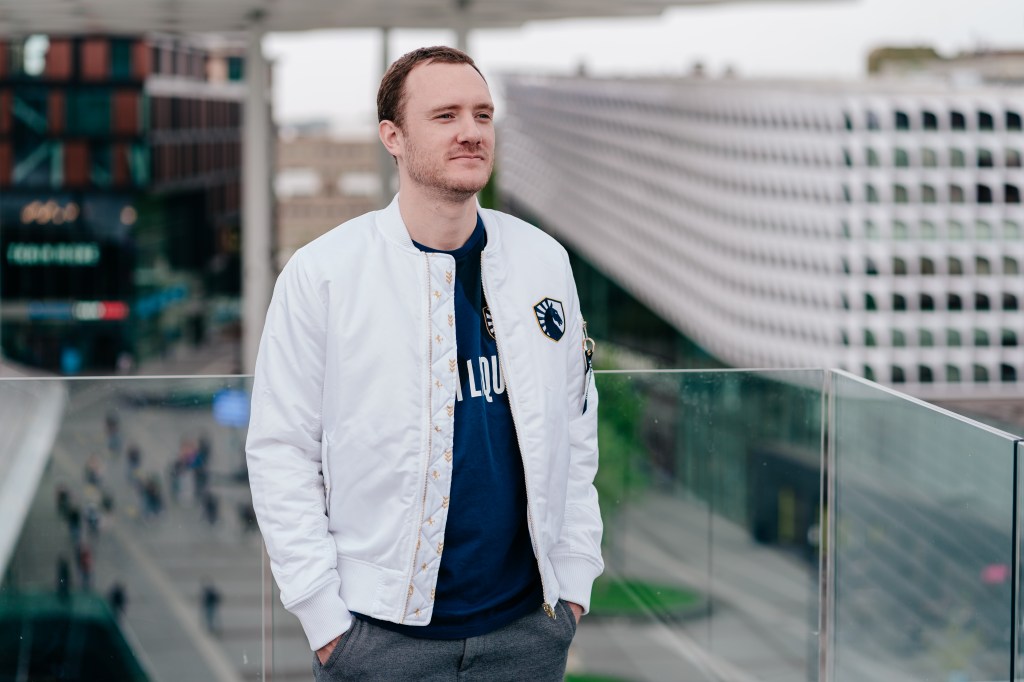 Team Liquid was founded back in 2000 and has grown to become one of the biggest esports teams in the world.

Team Liquid recently re-affirmed a partnership with Alienware, Dell’s gaming subdivision, that has been going strong since 2011.

Alienware has kitted out two bespoke training centres for the team in Los Angeles and Utrecht in The Netherlands with thousands of gaming PCs, monitors, headsets and peripherals.

Metro.co.uk caught up with Goossens for an exclusive interview on what managing the team looks like, what it takes to be a pro gamer and how the world of esports is exploding right now.

Metro: How has the world of esports changed since you first became involved?

Victor Goossens: The biggest thing is just the size and magnitude and the growth of what we’re going through right now.

The first 10 years of Team Liquid, this was not a business – it was not a company. When I started it was just all a hobby and people were volunteering. Nowadays, it’s just blown up. It’s gone from playing in front of five people to 50 to 100 to 300 and then eventually there are stadiums now that are filling with 10,000 people at once.

Because we are in the middle of it, it came somewhat gradually but you do wake up one day and you’re in a stadium of 10,000 people and you’re wondering, like, how did we get here?

So it’s really the size and the magnitude but honestly if you go back 20 years, I spent six months in Korea pursuing a dream of being a professional gamer and if you look at the teams back then, that was also driven on media rights. Maybe not streaming rights, but more television in Korea, and sponsorship was very very important and working with partners. And so the core of the business isn’t that different.

So as an industry for an esports team, we do a lot of the same stuff we did before but just at a different magnitude. We’re far larger, we have 170 staff members, we have two headquarters both supported by Alienware and so while a lot of our environment has changed, I think many of us feel like we’re still pursuing the same dreams with the same passion we always did.

Metro: What does the management and operation of an esports team involve?

So you have the scouting of players, you have analytical tools, you have managers, coaches, sports psychologists and chefs for our players and really this whole athletic arm of the company that’s just focused on making sure that our players compete.

For example, we’re able to offer something like our Alienware training facility here in the Netherlands where our Counter-Strike players from the US have been for the last six or so weeks. They have their own apartments, we have chefs for them and they have their coaches there and they’re just focusing on practice to ensure they can be the best that they can possibly be.

And of course, none of that would exist if you don’t have partners and you don’t have your media rights deals and you don’t set up the league revenue sharing that’s so common in traditional sports. So yeah, we’re also thinking of the business side of sponsorships and merchandise and digital items.

I think we have a bit of a responsibility here as Team Liquid along with some of the other teams in this space to build these force ecosystems.

Most sports that are popular have been around for a really long time, right? So a Dutch football fan doesn’t think twice about the fact that an Ajax or a PSG or a Feynoord are earning revenue share from the Dutch Eredivisie. It’s the most normal thing in the world – they earn money from the league that sells media rights and has partners, etc.

But if you start a sport from scratch that’s not the case. There’s going to be tournament organisers that have their own incentives and monetization and they’re not the same as the teams. Then there’s player interests, there’s fan interests. What kind of ecosystems are you building? Are you talking about leagues or is it more like tennis where you travel around the world in competitive environments like grand slams?

So we are working a lot with publishers and other teams and tournament organisers to make sure that teams are a part of building these ecosystems.

Metro: How involved are the people behind the games themselves?

VG: Sometimes the publisher steps in. Like, Riot has a really good vision for the Legal of Legends ecosystem.

Then at the league level, they’re consolidating your rights to sell sponsorships and media rights which is, yeah, more lucrative than a spread-out ecosystem.

In those scenarios, of course, Liquid’s role will be to actually try and develop some of that.

Metro: Okay, let’s drill down into some of the actual playing style a little bit. How do you look for players and what skills do they need to have?

VG: It differs per player and it differs depending on the game. The first thing is: we are in 15 different games. And while I started in Starcraft, that was 20 years ago. Maybe for the first 10 years of my career I could maybe tell you about which players were talented in Starcraft and which were less so.

What’s so interesting about esports, or gaming in general, is that it’s very easy to start off. If it’s a rainy day you can just log in and start playing a game, either on your own or you can find team environments and team settings.

Through that system we see incredibly talented players just rise up through the online competition. They’re just ranking themselves up against other people doing the same.

In terms of mechanical skill, if you see what these guys are able to do just in terms of reaction timing and clicking speed it’s just incredible.

Where the biggest jump comes in, is that if you’ve done that you might understand the game at a deep level, you might be very mechanically skilled – but you probably have not yet developed into, sort of, a team aspect of playing. That’s having four teammates and communicating what you’re doing while you play. That element is probably the largest jump between amateur and professional.

Metro: What’s the longevity like for a pro gamer?

VG: Some of the professionals in our games can be on top for a really long time. In Counter-Strike, we’re now seeing players who have been on top of the space for a decade and are still there.

We don’t know yet how long they can still go but we’re seeing guys that are 30 years old still compete with the very very best. And it’s all down to that communication and strategy from their experience that allows them to to perform.

Metro: Have there been any deep controversies across esports?

Well, there are there different games that Team Liquid is in and we look at each of them as 15 different sports. They each have their own cultures, their own ecosystems, their own jokes and the locker room culture for the players is different for each of these games.

So there’s a lot of different comparisons. Between all of these sports that we’re involved with we’ve definitely had our fair share of learnings. I remember in StarCraft a really long time ago, there was a betting scandal where a player lost the match on purpose. And we’re going through these learnings and we’re adjusting as we go but I think that’s a part of sports as well and it’s all of our joint responsibility to make sure the proper guard rails are in place.

Metro: What do the players do when they’re not training or competing?

Metro: How about you personally, do you get time to play games any more?

VG: I mostly watch a lot. When Team Liquid plays in any competitive matches, I’ll be watching. So you’re right there’s not a lot of time for me to play my own games on top of that.

Metro: What’s the barrier to entry like for esports?

To get started you can start online and play online, but there’s also a lot of awesome initiatives like universities with esports clubs where people come together [Covid-19 notwithstanding] and play together in leagues.

There’s really something in gaming for every single level. If you want to just go and play from home on an average evening when you feel like playing, you log in and maybe meet some friends online, that’s cool. Maybe you want to go in person to like a university team or something and, eventually, maybe you end up with a team like Liquid.

Also, I think of course like any sport there are risks that you need to be aware of, right? Like, if you look at a football there’s plenty of talent that goes to the major clubs when they are young, but they don’t make it and maybe they ended up graduating in school at a slightly lower level.

So it’s not like sport is only positive but if I think of what eSports and gaming contributes, I just look at my own development. When I was in high school, I was pretty shy and being online for me was a place to meet like-minded people and people that I could call my friends, that I could socialize with. Playing games allowed me to think strategically and allowed me to think economically.

I think there’s a lot of cool stuff that kids are learning and developing but, as with anything, there should always be a balance. That goes for healthy eating, that goes for sports and it goes for anything that you do.

Metro: What’s your prediction for the next five or ten years for esports?

VG: The biggest thing, in my opinion, has two elements to it. One, the next generation is growing up and the older generation is sticking around.

This shouldn’t be a surprise but when someone’s been into gaming for a decade between 25 and 35-years-old, when they turn 36, it’s not like a switch goes off and they stop watching and start watching, like, football or something. They’re still watching eSports, it’s still their hobby.

Maybe people find jobs or start families, but actually what we see is that sometimes they’ll cut their play time a little bit and continue to watch. So you see fans and audiences stick around while the younger generations are growing up with gaming and it’s their hobby and passion too.

So, year over year, if you draw that line forward 30 or 40 years from now I think most of the world has grown up with gaming and that’ll be hugely impactful for eSports.

Secondly, the other element is that through the development of eSports and the additional interest from mainstream media, you’re seeing more and more acceptance from society as a whole.

It becomes more and more a thing that people respect and appreciate, even if they’re not a part of it.

What we’re also seeing just in the development of Team Liquid as a business is that when we approach potential partners we’re now meeting with people who grew up with gaming themselves. If you go back in time, before you could speak about why they would want to work with Liquid, you would have to say ‘wait, do you know gaming? Ok, let me explain gaming….’.

That’s not happening anymore. The world knows. And I think that’s pretty cool as well.

PrevPreviousInstagram recommends misinformation to users, report claims
NextPorton Down trying to predict who will become seriously ill from coronavirusNext