Sharks hold the key to saving the planet, research finds 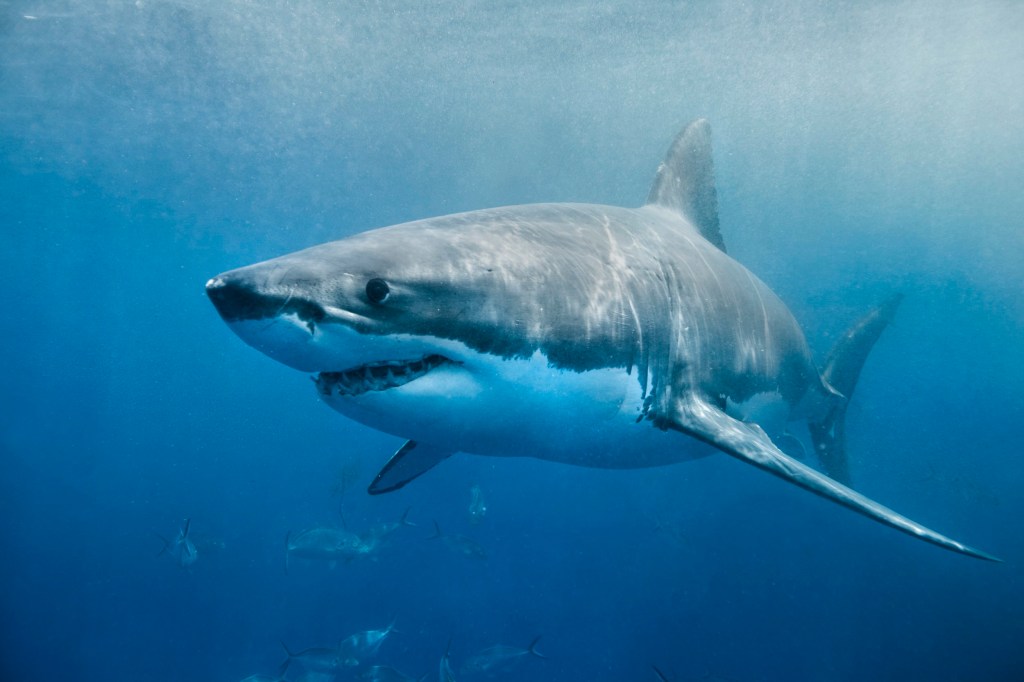 Sharks, tuna and mackerel hold the key to saving the planet, according to new research.

Big fish are a carbon sink – helping store the greenhouse gas at the bottom of the ocean, say scientists.

They regulate the amount that stays in the atmosphere by absorbing vast quantities of global emissions.

An international team has shown leaving more in the sea will put the brakes on global warming.

When a fish dies in the ocean it sinks to the seabed – sequestering all the carbon it contains.

The natural phenomenon – dubbed a ‘blue carbon pump’ – is being increasingly disrupted by industrial fishing. It has been overlooked – until now.

Lead author Gael Mariani, a PhD student at Montpellier University in France, said: ‘But when a fish is caught the carbon it contains is partly emitted into the atmosphere as CO2 a few days or weeks after.’

The first study of its kind found ocean fisheries have released at least 730 million metric tons of CO2 since 1950.

An estimated 20.4 metric tons was discharged in 2014 alone – equivalent to the annual emissions of 4.5 million cars.

Large fish such as tuna, sharks, mackerel and swordfish are about 10 to 15 percent carbon.

Prof Mouillot, a coral reef expert at James Cook University in Queensland, said: ‘When these fish die, they sink rapidly.

‘As a result, most of the carbon they contain is sequestered at the bottom of the sea for thousands or even millions of years.

‘They are therefore carbon sinks – the size of which has never been estimated before.’

The oceans are facing unprecedented threats from manmade climate change and overfishing.

The groundbreaking finding published in Science Advances provides another reason to protect them.

Specific regions that could be left alone – where fishing is not economically profitable – include the Central Pacific, South Atlantic and North Indian oceans.

Mr Mariani said: ‘Fishing boats sometimes go to very remote areas – with enormous fuel consumption – even though the fish caught in these areas are not profitable and fishing is only viable thanks to subsidies.’

The researchers called for more reasoned and thoughtful fishing practices in light of their analysis.

Mr Mariani said: ‘The annihilation of the blue carbon pump represented by large fish suggests new protection and management measures must be put in place, so more can remain a carbon sink and no longer become an additional CO2 source.

‘And in doing so we further reduce CO2 emissions by burning less fuel.’

Turtles, sea birds and mammals such as whales and dolphins also play a vital role in carbon sequestration.

Forests and wetlands can capture and store large amounts of carbon. These ecosystems are included in strategies 28 countries have pledged to adopt to fulfill the Paris Climate Agreement.

The researchers want a similar policy created for the oceans – Earth’s largest carbon sink and a central element of our planet’s climate cycle.