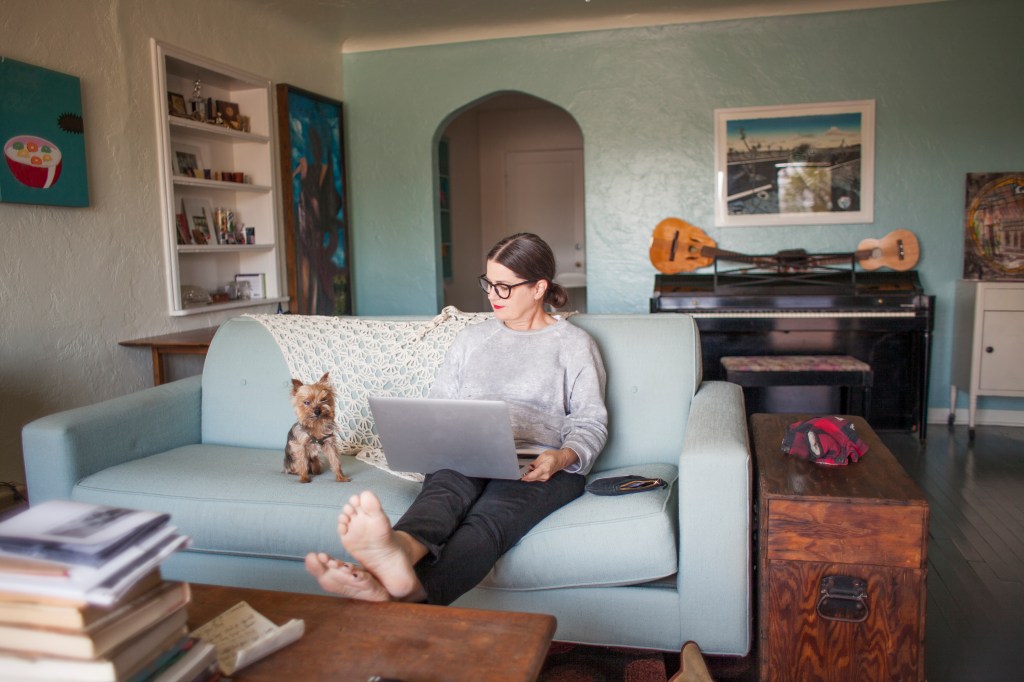 Working from home during the pandemic means many of us may be getting even less exercise than before.

There’s no more walking to the office, or running to catch a train or a bus. The lunchtime stroll may have vanished and getting to the gym is out of the question at the moment.

Sadly, the sedentary lifestyles of many officer workers – whether at a corporate or home office – is having an impact on our physical health.

Its recommendation, published in a special issue of the British Journal of Sports Medicine, is part of the new global guidelines on physical activity and sedentary behaviour.

In addition, new research, also published in the special issue, has suggested that increasing physical activity can counter the risk of early death linked to long periods of sedentary time.

Professor Emmanuel Stamatakis, of the University of Sydney, who is the co-editor of the special issue, said: ‘Although the new guidelines reflect the best available science, there are still some gaps in our knowledge.

‘We are still not clear, for example, where exactly the bar for ‘too much sitting’ is.

‘But this is a fast-paced field of research, and we will hopefully have answers in a few years’ time.’

He added: ‘These guidelines are very timely, given that we are in the middle of a global pandemic, which has confined people indoors for long periods and encouraged an increase in sedentary behaviour.

‘But people can still protect their health and offset the harmful effects of physical inactivity.

‘As these guidelines emphasise, all physical activity counts and any amount of it is better than none.

‘There are plenty of indoor options that don’t need a lot of space or equipment, such as climbing the stairs, active play with children or pets, dancing, or online yoga or Pilates classes.’

In research involving more than 44,000 people from four countries, scientists have found a high daily tally of sedentary time – defined in the study as 10 or more hours – to be associated with ‘a significantly heightened risk of death, particularly among people who are physically inactive’.

The researchers said that 30 to 40 minutes of moderate to vigorous intensity physical activity a day ‘substantially weakens this risk, bringing it down to levels associated with very low amounts of sedentary time’.

We don’t have much to go on when it comes to what defines ‘vigorous’, but a good way of measuring exertion is the ‘talk test’. If you’re doing moderately intense exercise, you should be able to talk but not sing. But if you’re pursuing a vigorous activity, you shouldn’t be able to say more than a few words without taking a breath.

The authors also said the findings broadly confirm the recommendations set out in the WHO’s global guidelines on physical activity and sedentary behaviour.

But, they added, there is not enough evidence to recommend specific maximum thresholds for sedentary behaviour.

The WHO guidance recommends a weekly tally of 150-300 minutes of moderate intensity, or at least 75-100 minutes of vigorous intensity.

But any amount of physical activity is better for health than none, it emphasises.

Other key recommendations for adults, including those living with long-term conditions or disabilities at any age, also include undertaking muscle-strengthening activity – such as weights, core conditioning – at moderate or greater intensity on two or more days of the week.

The guidance also says that adults aged 65 and over should do physical activity that emphasises functional balance and strength training at moderate or greater intensity on three or more days of the week, in order to enhance functional capacity and prevent falls.

It recommends that women should do regular physical activity throughout pregnancy and after the birth, to include various aerobic and muscle-strengthening activities.

PrevPreviousBrits have 55,000,000 unused mobile phones lying around, research finds
NextJupiter and Saturn to form a ‘double planet’ in the sky for the first time since the Middle AgesNext