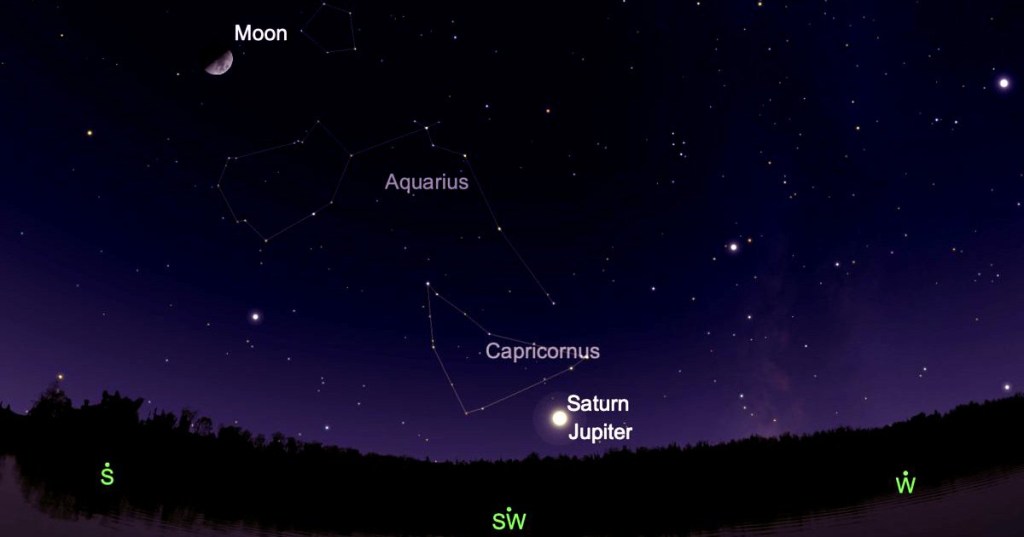 Next month, Jupiter and Saturn will appear closer in the night sky than at any point since the Middle Ages.

The two gas giants will be just 0.06º apart, forming an incredible ‘double planet’ that will give stargazers the rarest of treats.

Known as the Great Conjunction, the celestial event will take place on the night of December 21, 2020.

The last time these two planets were this close together was back in 1623 – but at 13º east of the sun, nobody would have seen it. If you’re looking for a Great Conjunction that was actually visible, you’d have to go even further back to March 4, 1226.

The spectacle next month will be visible across the world – providing we don’t suffer from dreaded cloud cover on the night it occurs.

Jupiter and Saturn have been moving closer together in the night sky since the summer and will be separated by less than the diameter of a full moon from December 16 through to Christmas Day.

Patrick Hartigan, an astronomer at Rice University, explained: ‘Alignments between these two planets are rather rare, occurring once every 20 years or so, but this conjunction is exceptionally rare because of how close the planets will appear to one another.

‘On the evening of closest approach on Dec 21 they will look like a double planet, separated by only 1/5th the diameter of the full moon.

‘For most telescope viewers, each planet and several of their largest moons will be visible in the same field of view that evening.’

For the best chance of seeing the ‘double planet’, you’ll need to look low in the western sky for around an hour after sunset.

‘The further north a viewer is, the less time they’ll have to catch a glimpse of the conjunction before the planets sink below the horizon,’ Professor Hartigan explained.

If you do miss it, you’ll have another chance to catch Jupiter and Saturn forming a ‘double planet’ later this century. Set a reminder in your diary for March 15, 2089.

PrevPreviousScientists worked out how much exercise ‘offsets’ a day of sitting down
NextElectric cars need 50,000 miles before they’re greener than petrol ones, report claimsNext