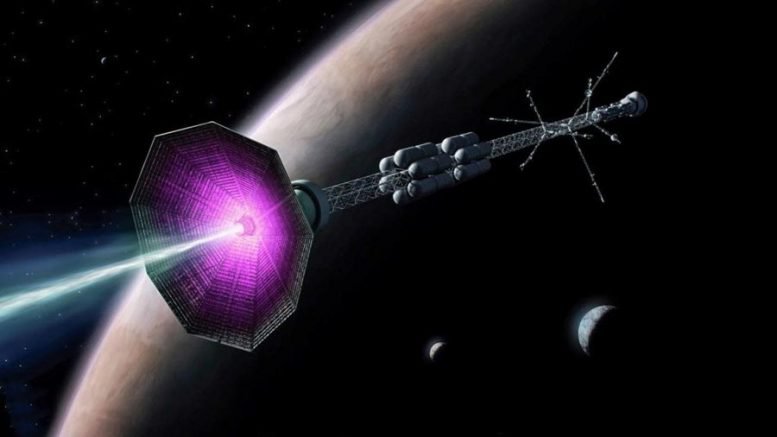 Dr. Fatima Ebrahimi, a physicist working at the US Department of Energy has invented a new kind of rocket thruster that could power deep space exploration.

Dr. Ebrahimi works at the Princeton Plasma Physics Laboratory and came up with a design that uses a magnetic field to shoot plasma particles into space.

By using a magnetic field, pilots could tailor the amount of thrust depending on the mission and destination of the spacecraft.

Current plasma (electrically-charged gas particles) propulsion devices use electric fields to propel them. But harnessing a magnetic reconnection would result in a much bigger acceleration. Dr. Ebrahimi’s thruster could, in theory, travel 10 times faster than comparable devices.

The idea is one that already exists in space. When magnetic fields on the surface of the sun separate and reconnect, they produce an enormous amount of energy. A similar outburst is created inside special machines called tokamaks which are a leading candidate for potential nuclear fusion reactor design.

‘I’ve been cooking this concept for a while,’ she wrote in a paper detailing the invention for the Journal of Plasma Physics.

‘I had the idea in 2017 while sitting on a deck and thinking about the similarities between a car’s exhaust and the high-velocity exhaust particles created by PPPL’s National Spherical Torus Experiment (NSTX),’ she wrote.

‘During its operation, this tokamak produces magnetic bubbles called plasmoids that move at around 20 kilometers per second, which seemed to me a lot like thrust.’

If the idea can be turned into a reality, this new type of rocket thruster could get us to Mars much faster. In computer simulations, it generating exhaust with velocities of hundreds of kilometres per second.

‘Long-distance travel takes months or years because the specific impulse of chemical rocket engines is very low, so the craft takes a while to get up to speed,’ Dr. Ebrahimi wrote.

‘But if we make thrusters based on magnetic reconnection, then we could conceivably complete long-distance missions in a shorter period of time.’

The scientists explained that the concept comes directly from work on fusion energy.

‘This work was inspired by past fusion work and this is the first time that plasmoids and reconnection have been proposed for space propulsion,’ Dr. Ebrahimi wrote.

‘The next step is building a prototype!’