Photos from space show ‘rivers of gold’ in the Amazon jungle 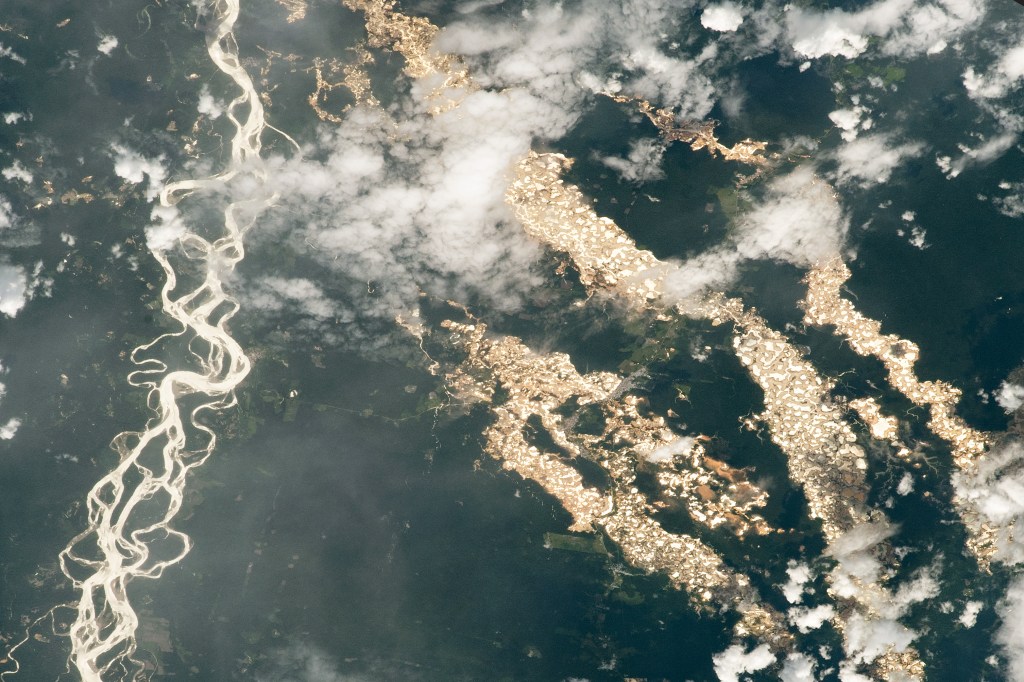 A picture of the Amazon taken from the International Space Station appears to show rivers of gold running through the Amazon jungle.

In fact, Nasa says they are unlicenced gold pits being dug as part of the Peru’s booming gold industry.

Usually, the pits are hidden from view due to cloud cover – but in this case, the skies were clear and the pits are illuminated by reflected sunlight.

The image is of a region of south-eastern Peru known as Madre de Dios. The area is home to a huge, unregulated industry of gold mining with workers trying to find the precious metal to make a living.

As a result, vast areas of forest have been destroyed causing a huge threat to areas of local biodiversity.

The picture was captured by an astronaut on board the ISS, approximately 220 miles above the Earth, back in December.

‘Likely dug by garimperos (independent miners), each pit is surrounded by de-vegetated areas of muddy spoil. These deforested tracts follow the courses of ancient rivers that deposited sediments, including gold. For scale, the western tract at image center is 15 kilometers (10 miles) long.’

Peru is the sixth largest producer of gold in the world and mining is the main cause of deforestation in the Madre de Dios region.

The space agency says the activity is also poisoning local communities as mercury used to extract the gold leeches into the river and the atmosphere. Despite this, tens of thousands of workers have arrived in the area to mine for gold.

The implications of deforestation for the wider world are well known at this point.

Dr Bonnie Waring, a senior lecturer at The Grantham Institute on Climate and Environment at Imperial College London (ICL), told Metro.co.uk that ‘the massive quantities of carbon contained in Amazonian trees and soils’ will ‘dramatically accelerate the pace of climate change, further endangering the forest that is left’ if burned or harvested.

Dr Alexandre Köberle, also from the ICL institute, echoed the position and noted that the Amazon’s huge array of biodiversity — much of it ‘unique and endangered’ — is also at risk from deforestation.

PrevPreviousUAE’s Hope probe beams back its first image of Mars
NextWhat are Apple AirTags and when will they be released?Next