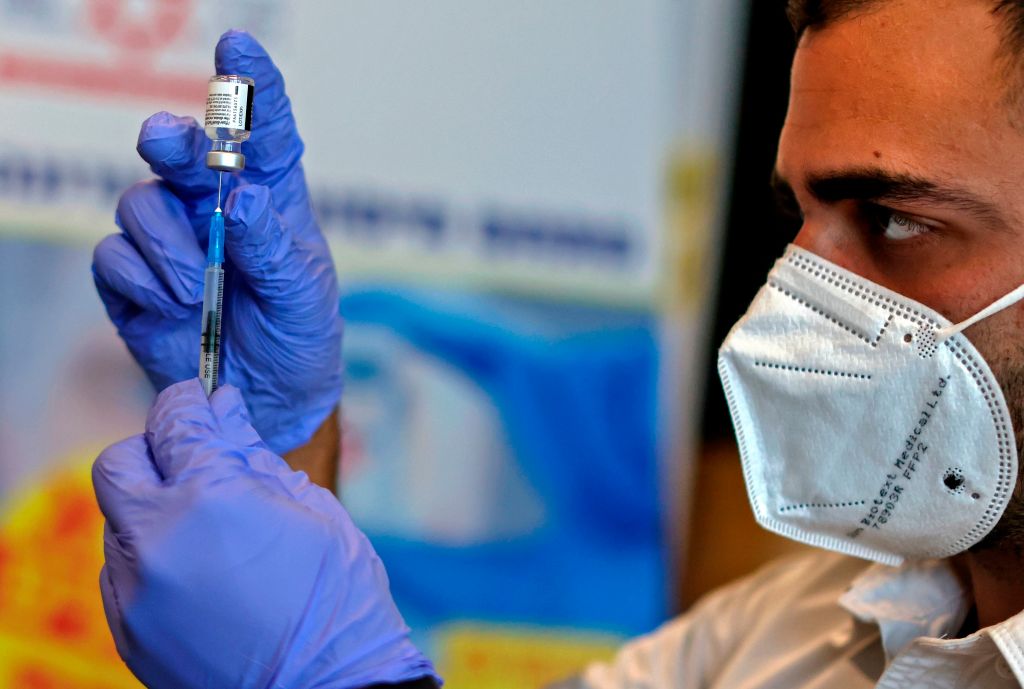 In the biggest real-world study of its kind, the Pfizer/BioNTech vaccine has been found to be 94% effective at preventing COVID-19.

All previous data on the vaccine’s efficacy has been from controlled clinical trials, with scientists unsure on how the vaccine would fare in the real world.

But the latest data from research in Israel will be a landmark moment for countries looking to end lockdown and reopen their economies.

Israel is two months into one of the world’s fastest vaccine rollouts, providing a rich source of data.

The research showed that two doses of the Pfizer shot cut symptomatic COVID-19 cases by 94% across all age groups, and severe illnesses by nearly as much.

The study of about 1.2 million people also showed a single shot was 57% effective in protecting against symptomatic infections after two weeks, according to the data published and peer-reviewed in the New England Journal of Medicine on Wednesday.

The results of the study for the Clalit Research Institute were close to those in clinical trials last year which found two doses were found to be 95% effective.

‘We were surprised because we expected that in the real-world setting, where cold chain is not maintained perfectly and the population is older and sicker, that you will not get as good results as you got in the controlled clinical trials,’ said senior study author Ran Balicer.

‘But we did and the vaccine worked as well in the real world.’

The study also suggests the vaccine, developed by U.S drugmaker Pfizer and Germany’s BioNTech, is effective against the coronavirus variant first identified in the UK.

Researchers said they could not provide a specific level of efficacy, but the variant was the dominant version of the virus in Israel at the time of the study.

The research did not shed light on how the Pfizer shot will fare against another variant, now dominant in South Africa, that has been shown to reduce the efficacy of other vaccines.

Of the nine million people in Israel, a nation with universal healthcare, nearly half have received a first dose, and a third have received both doses since the rollout began on Dec. 19.

This made the country a prime location for a real-world study into the vaccine’s ability to stem the pandemic, along with its advanced data capabilities.

‘This is more great news, confirming that the vaccine is around 90% effective at preventing documented infection of any degree of severity from 7 days after the second dose,’ said Peter English, a British government consultant in communicable disease control.

‘Previous recently studied papers from Israel were observational studies. This one used an experimental design known as a case-control study … giving greater confidence that differences between the groups are due to their vaccination status, and not to some other factor.’

The study published on Wednesday was the first analysis of a national COVID-19 vaccination strategy to be peer-reviewed. It also offered a more detailed look at how the vaccine was faring at weekly intervals, while matching people who received the shot to unvaccinated individuals with similar medical histories, sex, age and geographical characteristics.

Other research centres in Israel, including the Weizmann Institute of Science and the Israel Institute of Technology have shared several studies in recent weeks that show the vaccine to be effective.

At least three studies out of Israel have also suggested the vaccine can reduce coronavirus transmission, but the researchers have cautioned that wider studies must be conducted in order to establish clear-cut conclusions.

The Weizmann Institute’s latest data shows a dramatic drop in illness – which began this month with the first age group vaccinated, the over-60s – has now extended to the two subsequent groups to have completed both doses.

As infections have fallen in Israel, the country has eased its third national lockdown and reopened swathes of its economy including malls, shops, schools and many workplaces in the past two weeks.

Recreational venues such as theatres, gyms and hotels opened on Sunday, but are open only to those deemed immune – holders of a ‘Green Pass’, a health ministry document available for download only by people seven days after their second dose or people who have recovered from COVID-19.

On Wednesday, Tel Aviv held one of the country’s first live concerts after months of gatherings being banned under coronavirus restrictions.

‘This is so exciting, we are really so happy to be here today. It’s unbelievable after one year of staying at home, it’s great to be out to see some culture,’ said 60-year-old Gabi Shamir as she took her seat at the open-air show.

Still, the vaccine’s efficacy does not mean the country will be pandemic free any time soon. Like elsewhere in the world, a large proportion of the population are under 16 – about a third in Israel – meaning that they cannot yet get vaccinated as there have not been clinical trial results for children.

‘This is definitely not the end of the pandemic,’ said Eran Kopel, an epidemiologist at Tel Aviv University.

‘Once there is a safe vaccine for the children in Israel and all over the world we can then start to say that we could be approaching herd immunity.’