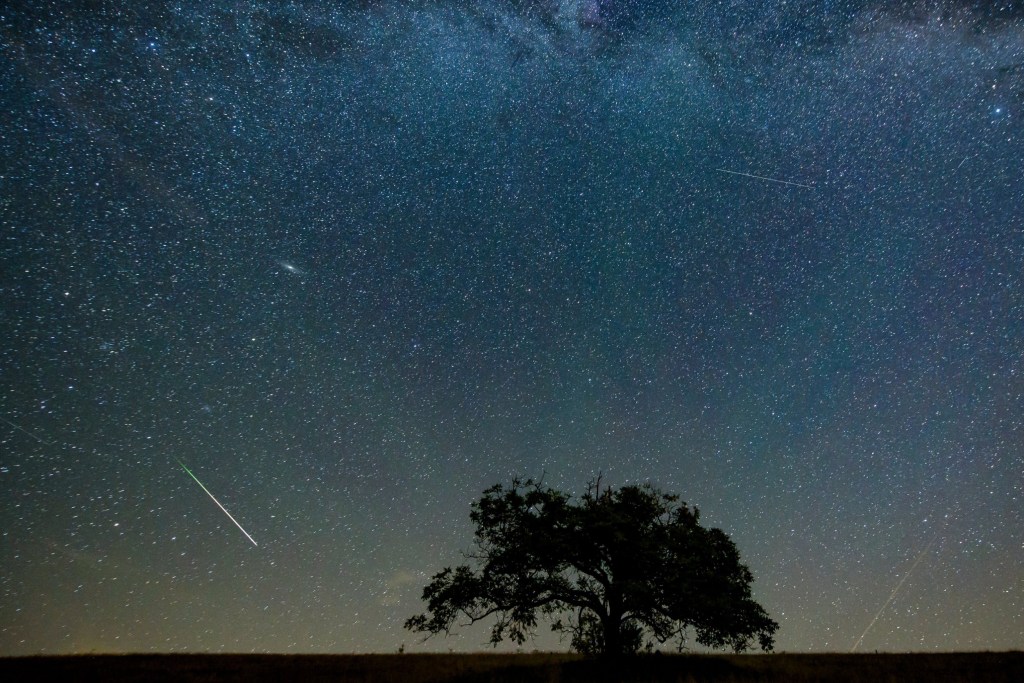 Skygazers are set for some celestial fireworks as Earth passes through the debris left by Halley’s Comet.

The Orionid meteor is active throughout October but is expected to peak this evening, Wednesday October 21.

The phenomenon gets its name from the Orion constellation – which is one of the brightest groups of stars in the sky.

Patricia Skelton, an astronomer at the Royal Observatory in Greenwich, explained: ‘Meteor showers are produced when the Earth passes through debris left behind by comets.

‘The comet responsible for producing the Orionids meteor shower is Halley’s Comet, last seen in our skies in 1986 and expected to return in 2061.’

Meteoroids from Halley’s Comet strike the Earth’s atmosphere at a speed of 148,000mph, burning up in streaking flashes of light.

As both the Earth and Halley’s Comet have elliptical orbits around the Sun, the two intersect twice every year, causing not only the Orionids, but also the Eta Aquariid meteor shower in May.

How long will the Orionids be visible for?

The Orionids will be visible in both northern and southern hemispheres until November 7.

Ms Skelton said: ‘The good news for observers is that the moon will be in a favourable phase for this year’s shower, setting long before the constellation of Orion rises in the night sky.

‘For your best chance to spot some meteors, wait until after midnight when Orion will be higher up in the sky.’

Ms Skelton said there is no need for any specialist equipment as the meteors can be seen with the naked eye.

She added: ‘Allow your eyes to adapt to the dark, a process which takes around 20 minutes, and face the direction of the constellation of Orion, towards the south and south-east.

‘Hunting for meteors can sometimes be a waiting game, so make sure you have a comfortable chair to sit on or a blanket to lie on.

‘Be sure to wrap up warm though as you may be outside for some time.’

After sunset the meteors could start to become visible, but your best chance to see them will be after 10pm. The official ‘peak time’ for spotting meteors is about 11.30pm.

If you’re feeling particularly brave, you could even get up very early on the morning of October 22 as the night will be darkest in the early hours before sunrise.

You will need to look upwards and eastwards into the night sky – near the constellation of Orion – for the best chance of spotting the meteors.

‘The Orionids, which peak during mid-October each year, are considered to be one of the most beautiful showers of the year,’ explained Nasa

‘Orionid meteors are known for their brightness and for their speed. These meteors are fast—they travel at about 148,000 mph (66 km/s) into the Earth’s atmosphere.

‘Fast meteors can leave glowing “trains” (incandescent bits of debris in the wake of the meteor) which last for several seconds to minutes. Fast meteors can also sometimes become fireballs.’

The Orionids are caused by the Earth’s orbit bringing it into contact with debris from Halley’s comet.

Anna Ross, an astronomer at the Royal Observatory Greenwich, explained: ‘As both the Earth and Halley’s comet have elliptical orbits around the Sun, these two intersect twice per year. This causes not only the Orionids, but also the Eta Aquarids meteor shower in May.’

Halley takes around 76 years to make a complete revolution around the Sun. It will next be visible from Earth in 2061.

Nasa explained: ‘Each time that Halley returns to the inner solar system its nucleus sheds ice and rocky dust into space. The dust grains eventually become the Orionids in October and the Eta Aquarids in May if they collide with Earth’s atmosphere.’