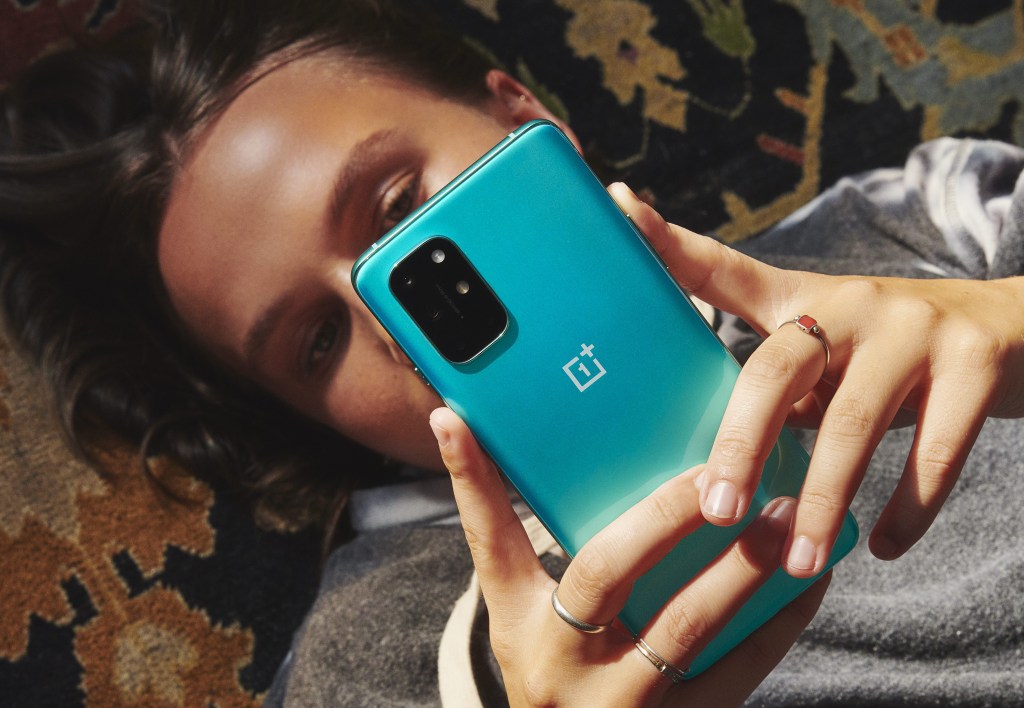 Then, a little while later, it launched the mid-tier OnePlus Nord.

Now, a little while later still, it’s releasing the OnePlus 8T. In terms of positioning, the 8T sits above the Nord but still beneath the Pro. It’ll replace the regular OnePlus 8 in the company’s store and is little more than a mid-season refresh.

The screen is a 6.55-inch AMOLED display with that all-important 120Hz refresh rate. That means that when you’re skimming through the homescreens or scrolling websites and menus, the motion is incredible smooth. The 120Hz refresh rate was the hallmark of the 8 Pro earlier this year so it’s good to see it trickling down, although the size and HD+ resolution remains the same as the regular OnePlus 8.

Similarly, the screen isn’t curved around the edges like the 8 Pro is. That means you technically get less display for your money but I found I was much less likely to accidentally touch the screen while holding it as I would with the Pro.

The back of the phone is a new ‘Aquamarine’ shade of green. It’s nice and shiny with a glossy glass back. It continues the OnePlus love affair with the colour green this year and isn’t as bad at picking up smudgy fingerprints as I feared. Still, if you’d prefer something a bit more traditional, there’s also the ‘Lunar Silver’ option. OnePlus has kept the physical slider on the side of the phone for muting the device, which is great. Alas, there’s no 3.5mm headphone jack, but I guess that’s to be expected these days.

Inside the OnePlus 8T is a Snapdragon 865 processor that’s top-of-the-range and supremely powerful. It’s backed by either 8GB or 12GB of RAM but what’s also crucial is the 8T comes pre-loaded with Android 11 (underneath OnePlus’ own OxygenOS), the very latest version of Google’s operating system. And while the OnePlus 8T comes from China, there’s no Huawei-style trade bans in place blocking access to Google’s apps. You can use either Face Unlock or the fingerprint scanner located under the screen to unlock the 8T. Both options are quick in practice and it’s good to have a choice when we’re all leaving home with masks on.

I found the OnePlus 8T to be incredibly fast during my testing and it didn’t slow down (or, crucially, start running hot) while gaming, browsing the web or video calling contacts. Admittedly, you may run in to performance issues years down the line but it does bring with it a certain level of future proofing because it’s fully 5G ready.

You can opt for a choice of either 128GB of non-removable storage (with the 8GB RAM model) or 256GB (with 12GB RAM) if you need more space for your media and apps.

When it comes to the battery, OnePlus hasn’t equipped the 8T with wireless charging. What it’s done is bump up the wired charging experience to something it calls ‘Warp Charge 65’. Inside the box is a 65W charge adapter that’ll juice the 4,500mAh battery up in 39 minutes. It’s also powerful enough to rapidly charge laptops and tablets, which is handy.

The camera array on the OnePlus 8T has been shifted from up into the corner in a similar vein to Samsung’s Galaxy S20 range. There are four cameras: the main 48-megapixel shooter, an ultra-wide angle 16-megapixel camera, a macro lens and a monochrome lens.

The cameras are all very good and bring the usual features you’d expect to see. There’s Nightscape mode for low-light shooting and image stabilisation for improved video capture. And a new Video Portrait mode can even add that blurry background bokeh effect to videos.

Sticking with the software smarts and a new feature for the OnePlus 8T is an always-on display option that gives you a few options for keeping your phone screen lit with the time and a few choice notifications. There’s even an option called Canvas that takes a picture and automatically converts it into a sketch for the display. When you unlock the phone, the sketch transforms back into the original picture displayed as your wallpaper. It’s a gimmick, sure, but then why not? If you want, you can go even further and use your Snapchat Bitmoji avatar for the always-on display.

The pricing for the OnePlus 8T stands at £549 for the 8GB/128GB Lunar Silver model and £649 for the 12GB/256GB Aquamarine Green model. Those are some seriously competitive prices in a world of top-tier phones selling for over a grand.

All told, the OnePlus 8T is a very good phone, but it’s also just a refresh that adds a few little extras without redefining what OnePlus did earlier in the year. It’s great to have a 120Hz display at a lower price point, but there’s nothing here that’ll cause you to jump ship from the OnePlus 8 or even the OnePlus 7T Pro.

However, if you’re an Android fan left wanting by the Pixel 5 then this could be the perfect alternative option. Google’s loss may be OnePlus’s gain.

You can pre-order the OnePlus 8T here.