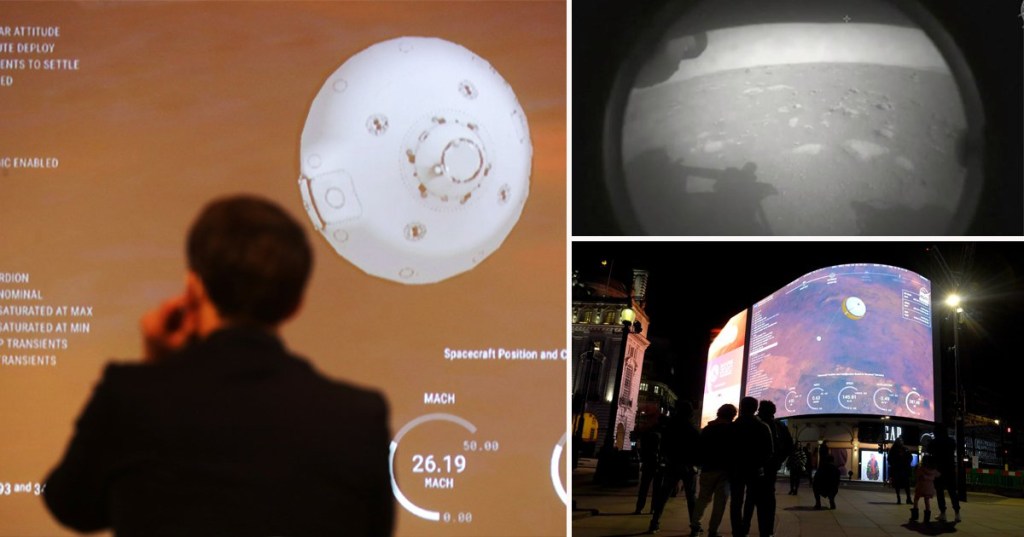 Nasa’s Perseverance rover has successfully landed on Mars to begin quest to search for signs of life.

The six-wheeled robot made it through the ‘seven minutes of terror’, in which it managed to slow down to a walking pace after plunging through the red planet’s rarefied air at 5.3km per second.

Ground controllers were biting their nails for even longer after the parachutes opened, as it takes around 11 and a half minutes for the signal confirming a successful landing to reach Earth.

It arrived within its target zone inside Jezero Crater, site of a long-vanished Martian lake bed, after sailing through space for nearly seven months.

The craft covered 472 million kilometres before piercing the Martian atmosphere at 19,000 km per hour.

After successfully touching down, the machine tweeted: ‘I’m safe on Mars. Perseverance will get you anywhere.’

Perseverance, the biggest, most advanced rover ever sent by NASA, became the ninth spacecraft to successfully land on Mars, every one of them from the U.S.

This is the first successful landing on the planet since the Curiosity rover touched down in 2012, after the Opportunity rover fell silent.

Percy, as the robot is nicknamed, is on a $3billion mission with Nasa and the European Space Agency to bring back rocks that could answer whether life ever existed on Mars.

While the planet is now a barren wasteland, scientists believe life may have flourished there some 3 million years ago, when the fourth planet from the sun was warmer, wetter and potentially hospitable to life.

Deputy project scientist Ken Williford said: ‘Are we alone in this sort of vast cosmic desert, just flying through space, or is life much more common?

‘Does it just emerge whenever and wherever the conditions are ripe? We’re really on the verge of being able to potentially answer these enormous questions.’

By answering these questions, scientists may one day find out whether we human beings could also live there one day.

Over the next two years, Perseverance will use its 7-foot arm to drill down and collect rock samples.

Scientists hope to find biosignatures embedded in samples of ancient sediments for future analysis back on Earth – the first such specimens ever collected by humankind from another planet.

Three to four dozen chalk-size samples will be sealed in tubes and set aside on Mars to be retrieved by a fetch rover and brought homeward by another rocket ship. The goal is to get them back to Earth as early as 2031.

On the eve of the landing, the European Space Agency’s director of human and robotic exploration, David Parker, said: ‘It’s really the most extraordinary, mind-boggingly complicated and will-be history-making exploration campaign.’

Two subsequent Mars missions are planned to retrieve the samples and return them to NASA in the next decade.

NASA has three Mars satellites still in orbit, along with two from the European Space Agency.