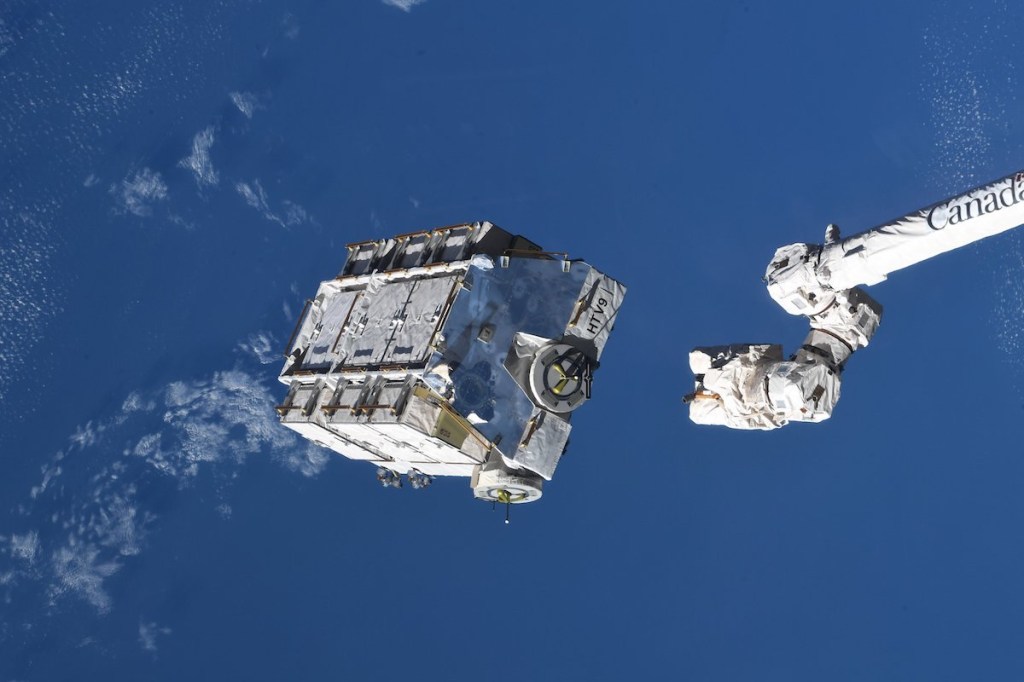 These pictures show the moment Nasa released a 2.9-tonne pallet of batteries to drift aimlessly in space after upgrading the International Space Station (ISS).

It’s the biggest piece of space junk to date – but the US space agency isn’t worried.

Nasa says the pallet will spend the next two to four years drifting around in low-Earth orbit ‘before burning up harmlessly in the atmosphere.’

The 48 nickel-hydrogen batteries were no longer required on the orbiting lab as they’ve been slowly swapped out for new ones over the last six years. Initially, the discarded power packs were to be brought back to Earth aboard the Japanese H-II Transfer Vehicle (HTV).

But the plan was changed when a failed 2018 Soyuz launch disrupted spacewalk schedules.

Instead, the space station’s robotic arm was used to toss it out into the vacuum.

Nasa communications specialist Leah Cheshier told Spaceflight Now in an email: ‘The External Pallet was the largest object—mass-wise—ever jettisoned from the International Space Station at 2.9 tons, more than twice the mass of the Early Ammonia Servicing System tank jettisoned by spacewalker Clay Anderson during the STS-118 mission in 2007.’

‘The greater energy density of lithium-ion technology reduces the number of needed batteries (and launch vehicles), translating into fewer cargo manifest spots required for the batteries,’ the American space agency shared in a statement.

Lithium-ion batteries were chosen following research proving their success on Earth, as they are designed to withstand intense heat and thermal events.