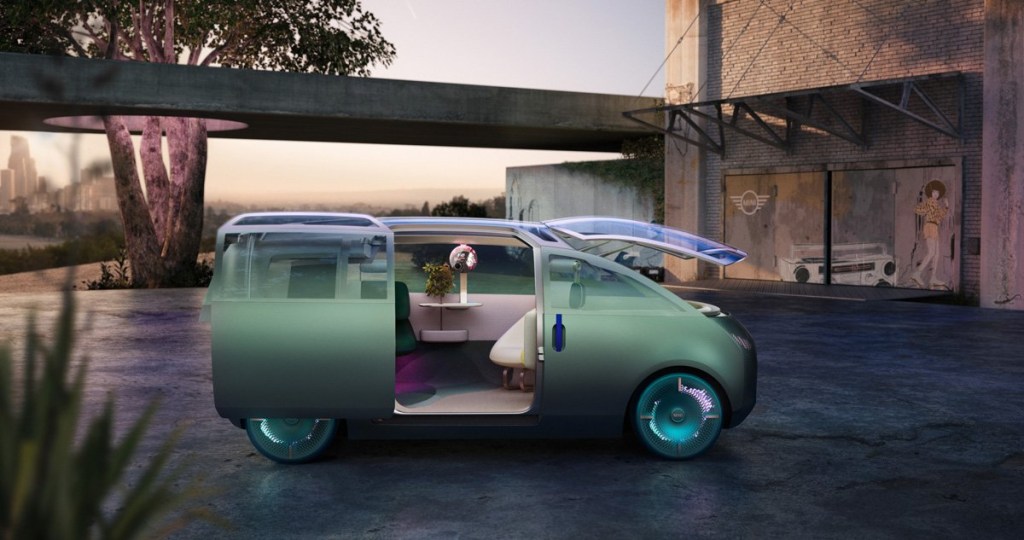 Mini has unveiled a new concept car that it says is an ‘all-new interpretation of a vision of space.’

It’s called the Mini Vision Urbanaut and it’s a rather delightful little creation that basically acts like a lounge on wheels.

The electric vehicle has three different modes (Mini calls them ‘moments’) that consist of ‘Chill’, ‘Vibe’ and ‘Wanderlust’. The first two are employed while you’re parked while the third is for actual driving.

Each different moment affects how the car behaves. During ‘Chill’, the car ‘becomes a kind of retreat, a haven where you can relax – or work with full concentration – during a journey.’ Think mood lighting alongside a flip-down table for reading or writing.

Meanwhile, the ‘Vibe’ mode ‘puts time with other people at centre stage’ and ‘Wanderlust’ is when the thing is actually moving – either you’re driving it or it’s autonomously taking you where you want to go.

Mini says the concept is aimed at providing the ‘ideal environment in which to go on a journey, but is also the aim of the journey.’

The company continues: ‘Having arrived at the chosen destination, it can transform into a living room in just a few simple steps. Occupants enter the innovative cabin through a large sliding door in the side of the car.

‘The cutting-edge slide and swivel mechanism is the ideal design for urban driving conditions where space is at a premium. There are no other doors on the driver’s side or front passenger side.’

A number of little tricks inside the vehicle make best use of the space. The two front seats are designed to rotate, while the backrests for the generously sized seat surface in the rear can be folded manually (left rear seat) and turned around (right rear seat).

When the car is stationary, the dashboard lowers and the driver’s area becomes a comfortable seating corner – which Mini calls the ‘daybed’. Added to which, the windscreen can be opened upwards when stationary to create a kind of ‘street balcony’.

Of course, this is nothing more than a concept at the moment. Which means it exists only on some computer drives at Mini HQ.

Still, it’s a nice idea and one day we’d love to see one of these actually out on the road. Or parked up next to a scenic spot with some owners enjoying the view from the daybed.