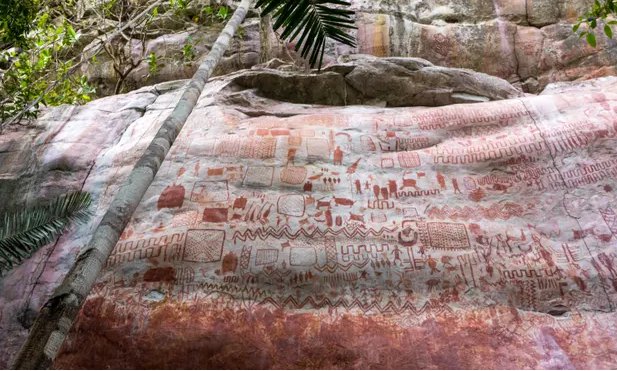 Tens of thousands of prehistoric cave paintings have been discovered along an eight-mile wall in the Amazonian rainforest.

The art is believed to be at least 12,500 years old and depicts ice-age animals like the mastodon, an ancient relative of the elephant.

There are also depictions of palaeolama – an extinct member of the camel family, as well as giant sloths and ice age horses.

Archaeologists have hailed the discovery, located in Chiribiquete National Park, Colombia, as ‘the Sistine Chapel of the ancients’.

It will take generations to properly study the paintings, which give us a unique glimpse into a lost civilisation.

Although the discovery was made last year, it’s been kept secret until now because it was being filmed for a major Channel 4 documentary airing next month.

The find was made by a British-Colombian team, funded by the European Research Council. The team was led by José Iriarte, a professor of archaeology at Exeter University and a leading expert on the Amazon and pre-Columbian history.

‘When you’re there, your emotions flow … We’re talking about several tens of thousands of paintings. It’s going to take generations to record them … Every turn you do, it’s a new wall of paintings,’ he told the Observer.

‘We started seeing animals that are now extinct. The pictures are so natural and so well made that we have few doubts that you’re looking at a horse, for example. The ice-age horse had a wild, heavy face. It’s so detailed, we can even see the horse hair. It’s fascinating.’

And some of the paintings are so high up, they can only be seen by using a drone.

Alongside the images of animals, such as fish, turtles, lizards and birds are human hand prints – belonging to prehistoric relatives of current Amazonian tribes.

It’s possible the prints and drawings were made by migrants from Siberia who crossed the Bering Land Bridge some 17,000 years ago. During the ice age this land bridge stayed relatively untouched because snowfall was very light.

It stretched for hundreds of kilometres into the continents on either side so provided a way for people to cross into different areas.

A humid climate and acidic soil have destroyed most of the archaeological records of human activity in the area. Moreover, Amazon natives didn’t keep any kind of written history until very recently. Anything we know about the region prior to about 1500 has been pieced together from what little evidence has been found – such as a few ceramics and some arrow heads.

The documentary, Jungle Mystery: Lost Kingdoms of the Amazon, explains the challenges of accessing the extremely remote area. The team had to drive for two hours before trekking through the jungle for another four just to reach the site.

Ella Al-Shamahi, an archaeologist and explorer who presents the documentary, told the Observer: ‘The new site is so new, they haven’t even given it a name yet.’

The team plan to return to the site to continue studying the paintings as soon as Covid-19 allows them to do so.

<
PrevPreviousLoneliness has the same effect on our brains as hunger, research claims
NextMini’s snug pod-like concept car is a living room on wheelsNext