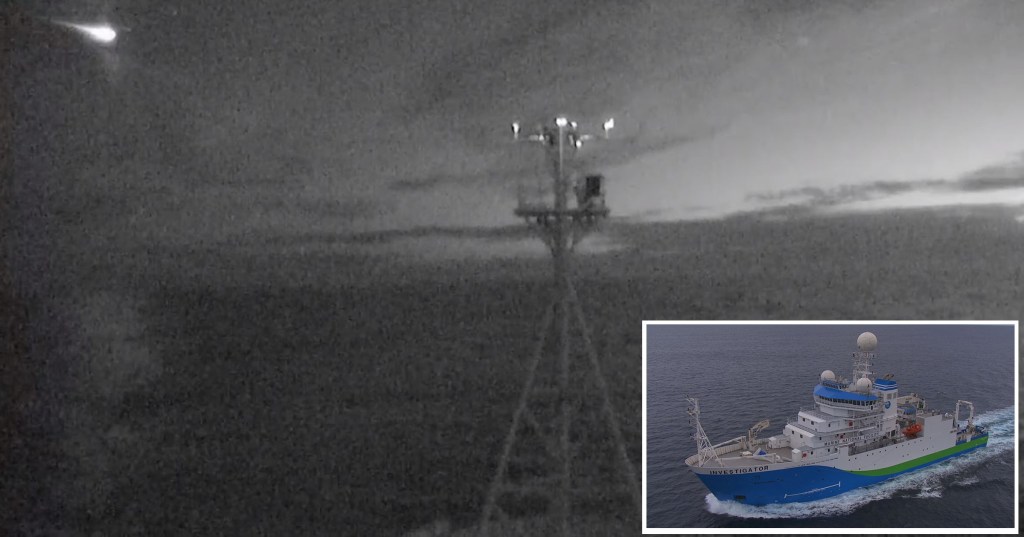 This is the moment a meteor blazed through the night sky and lit up the darkness as it burned up in Earth’s atmosphere.

A research ship travelling in the waters off Tasmania managed to capture the moment the ball of fire broke up over the ocean.

Shining a bright shade of green, the space rock was spotted at 9.30pm local time.

Although reports of the sighting flooded local media, the only footage of it happening came from the CSIRO RV Investigator.

CSIRO (Commonwealth Scientific and Industrial Research Organisation) Voyage Manager John Hooper, who was on the ship, said it was  a stroke of luck’ after seeing the footage.

‘What we saw on reviewing the livestream footage astounded us, the size and brightness of the meteor was incredible,’ Hooper said.

‘The meteor crosses the sky directly in front of the ship and then breaks up – it was amazing to watch the footage and we were very fortunate that we captured it all on the ship livestream.’

Commenting on the impressive footage, Glen Nagle, from CSIRO Astronomy and Space Science, highlighted that it reminds us ‘that space is far from empty.’

‘Most of it goes unseen as it occurs over an unpopulated area like the southern ocean.

He explained that meteors enter the atmosphere at huge speed – anything from 25,000mph to 160,000mph. The extreme kinetic energy is expended as other forms – such as light, heat and sound.

At the time, the RV Investigator was in the Tasman Sea about 62 miles (100km) south of the Tasmanian coast. The ship and crew were conducted a seafloor mapping project of the Huon Marine Park for Parks Australia.

The largest recent meteorite impact was in Chelyabinsk in Russia in 2013 – and Nasa says fireballs that large are only expected two or three times a century.

During the 2013 Chelyabinsk event, 1500 people were injured and 7300 buildings damaged by the intense overpressure generated by the shockwave at Earth’s surface.

The asteroid which ‘blew up’ over the Russian town of Chelyabinsk in 2013, is thought to have been around 60 feet across.

Smaller rocks like the Chelyabinsk object will hit our planet every 10 to 100 years, experts believe.

Humanity doesn’t need to fear gigantic asteroids big enough to wipe us off the face of the Earth, because they are easy to track due to their enormous size.

But we should be very afraid of smaller ‘stealth asteroids’ which are big enough to wipe out a city and extremely difficult to detect.

In 2018, Nasa warned of a ‘vulnerability’ in Earth’s defences which means there is only a ‘limited’ chance of spotting asteroids coming from a certain direction in space.