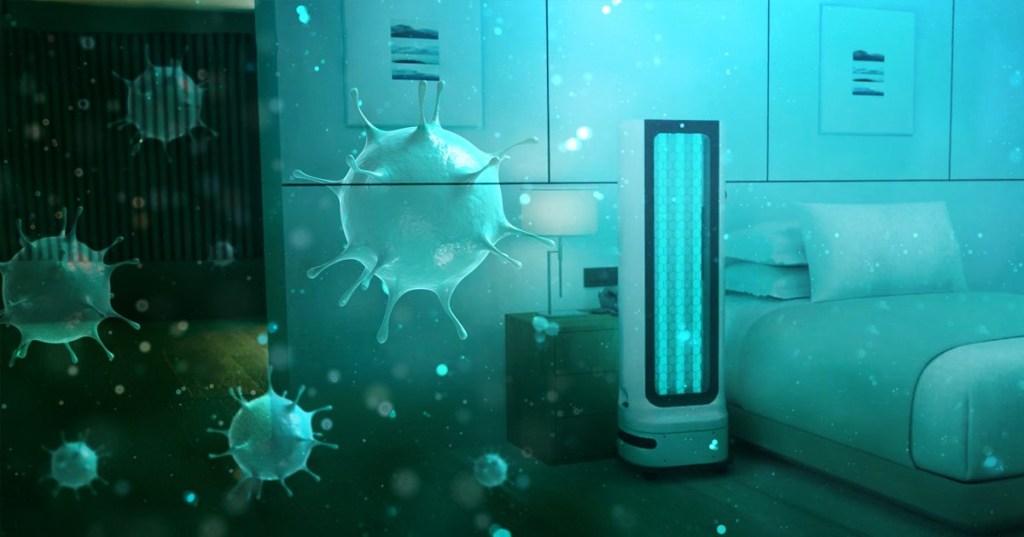 Tech giant LG is the latest company to launch a coronavirus-killing robot.

The robot was officially unveiled during the first day of the Consumer Electronics Show which is taking place virtually this year because of Covid-19.

LG said the device is designed to operate in hospitality, retail, corporate and educational settings as a way to irradiate high-touch, high-traffic areas.

It is the latest example of technology firms responding to new needs created during the pandemic, and follows LG’s introduction last year of a battery-powered face mask which the company labelled a wearable air purifier.

LG said this latest robot had been created at a time ‘when hygiene is of the highest priority for hotel guests, students and restaurant customers’.

The new robot is also programmed to reduce human exposure to UV rays, with motion detection sensors in place which activate a safety lock and stop the robot when it senses people within a five-metre radius.

The robot’s progress and controls can also be accessed via a connected mobile app.

Elsewhere at its CES press conference, the Korean tech firm unveiled a range of new home appliances, including new smart fridges and washing machines, as well as a new line of high-end LCD televisions.

CES is normally held every January in Las Vegas, with thousands of exhibitors and more than 170,000 attendees coming to see a wide range of new gadgets unveiled.

PrevPreviousWhat is Parler? Far-right ‘free speech’ app blocked by Google, Apple and Amazon
NextZoom interview tips: How to get hired from a virtual job interview, according to the expertsNext